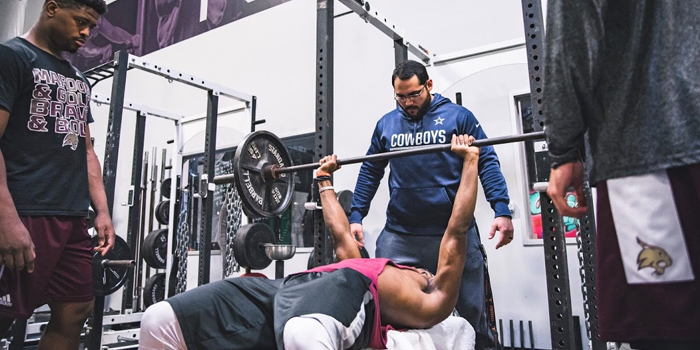 For most people, the bench press is the king of all exercises. That is why the question, “How much you bench?” is heard throughout many globo gyms across the world. For this reason, I believe that everyone should have an understanding of how to grow that lift to a respectable number.

As with every other lift, it is important to add variety to increase adaptations and promote consistent progress in the gym. I think I speak for everyone when I say that we’ve all hit a plateau, and it sucks! Through this 4-part video series, you will learn everything from the technique of the movement to more advanced methods like overload training.

In this video, I break down everything you need to know about how to set up on the bench press. Technique is the first and most important thing you must master prior to changing variations and other factors. Performing the bench press this way will ensure that you reduce the likeliness of injury as this setup promotes an even distribution of the stress placed on the body throughout the lift.

It is extremely important to understand that the longer you have bench pressed with bad technique, the more time it will take to undo some of the improper movement patterns you have developed. Therefore, I suggest that you be incredibly patient and focus on all of your bench press sessions.

Introducing partial range of motion training into your program can be an immediate game-changer. You can do this through floor presses, board presses, presses with the shoulder saver pad, or press from pins. Overloading these ranges can allow you to become more accustomed to the heavier loads as well as strengthen that portion of the lift. The weights lifted during these positions are most often referred to as your mini-maxes and helps to develop your force-posture curve.

The force-posture curve is the relation between the joint angle and the amount of weight you can lift. As you become closer to the lockout portion of the bench press, you should be able to lift more weight. However, this isn’t always the case due to the neurological adaptation that you still must create to a heavier load or a load above your max bench press.

This adaptation helps to increase the rate and effectiveness at which the nerves fire. It can only be created through this method and the ones that follow. An important factor to consider when programming: Implement movements that contain both eccentric and concentric portions and/or concentric only. The main importance of this is that the movements that contain the eccentric part can heavily stimulate the nervous system. Therefore, training several weeks above your max with the addition of an eccentric portion can eventually lead to a similar condition of neural fatigue and overtraining.

Accommodating resistance is one of the methods that the general public sees as theatrical or just for looks. However, this couldn’t be farther from the truth. Bands and chains are believed to be essential items for those people looking to reach a new personal record.

Similar to the previous method, bands and chains help to overload the top portion of the lift to create a neurological adaptation that is greater than your current bench press max. Nevertheless, this method allows you to train the full range of motion, whereas the previous method doesn’t. This is important, as increasing reversal strength off the chest can help to ensure you don’t get pinned down immediately at the bottom of the movement. As a result, this can also help to train your body to have constant acceleration throughout the movement. This can be seen during someone’s max where the movement may get tough, but they are able to keep the bar moving centimeters at a time.

Though this method was not created as a means to train stability, the tension of the bands and wobble of the chains can force you out of position and be extremely dangerous. Therefore, be sure that when attempting this movement, you grip the bar as hard as possible, especially as you unrack it.

*For a tip on how to measure your band tension, check out this video.

When performing the reverse band bench press, you mustn’t allow any assistance at the lockout to ensure that you require your body to withstand the tension and neural drive needed to hold that weight. When performing the slingshot bench press, be sure to maintain maximal tension through your lats to prevent the slingshot from shooting the bar backward towards your face.

This is preferably programmed towards the end of your training cycle to help peak you for a max. Due to the skill requirement and large percentage over your current bench press max, I suggest that this be one of the last methods that you attempt to place into your programming.

CJ is the Head Strength and Conditioning Coach for Onnit in Austin, Texas. He's had the opportunity to train athletes in the NFL, CFL, WWE, and many other professional and DI athletes. He has contributed multiple articles to T-Nation, Bodybuilding.com, and Men's Journal.