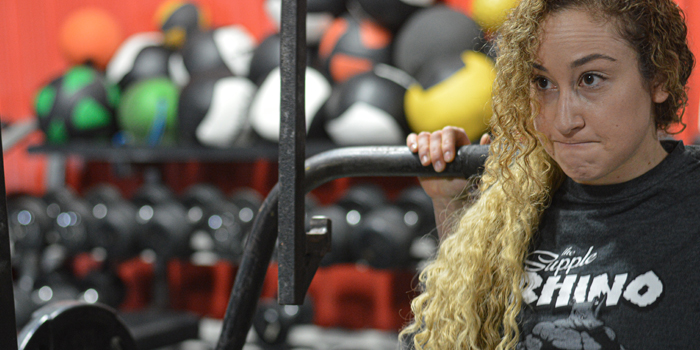 There is an argument to be said for building what I call “workout endurance.” In my mind, this means how long in any particular training session you are able to maintain high levels of both concentration and effort. Both of these things are known to decay when fatigue accrues. The inherent problem with the onset of fatigue that is not so readily apparent as missing training reps is the precipitous decay of technique and the increased opportunity for injury. The longer you can avoid fatigue in your workout, the better. For obvious and not-so-obvious reasons. You get tired, you get sloppy, and you fail reps and risk a disaster. Even if you don't get hurt, you practice a sub-par technique and instill bad habits. You avoid fatigue, and you stay mentally sharp and can perform more sets. This is the argument for increasing your workout endurance or conditioning. Have I sold you?

I'll make my case by recalling what I've read about Steve Prefontaine. He was a distance runner (mile and two mile but up to 10,000-meter track events) from Oregon. What I remember from his story is that he changed the entire way in which the races were run and trained for. Before him, it was common for milers to be tacticians. They would pace themselves and plan their kicks based on their personal strength. If they considered themselves to be poor  “finishers,” they would begin their sprints to the line early. If they were strong sprinters, they would perhaps let others go off early and potentially burn out and start very brazen sprints later in the race, overtaking weaker sprinters. Those who were very poor finishers would push the pace early and establish unbeatable leads to fend off the strong finishers. It was a commonly accepted “fact” that you were in one camp or the other.

But Prefontaine was a poor finisher. He had no “gas” at the end. So he completely eradicated any cat-and -mouse antics in strategy by deciding that he was going to go out blazing as fast as he could for the entire race. He sprinted from the gun to the wire. He famously said something about being able to take more pain than anybody.  Two quotes I know are “No one will ever win a race against me by running an easy two miles” and “I'm going to make it into a pure guts race.” Now with the advent in 2019 of the first sub two-hour marathon, EVERY distance race has become a sprint. Do the math on those splits, and blow your mind! Everybody goes all out all the time. Strategy is dead. R.I.P.

So, we could argue about weight training for “conditioning” or “power.” We could even suggest a perfect balance in training protocol between the two. That is a very interesting and worthwhile debate to have, and as such, I’m dropping it right here for another day! What I’m talking about here is how we might be able to do common power training protocols ...longer.  Or, better still, to do them the same with less fatigue. In essence, how we might do more low-rep sets per workout. Or, do heavier workouts with easier recovery and less decay in form due to fatigue. To increase our “power endurance.” To “Prefontaine” our training. To go hard, go heavy, and go forever! Or, at least a few sets more than what is normally accepted!

If you think there is a limit to how many hard, low-rep sets one can do…I'll agree. I'll refer you to my endless statements about recovery. I'll repeat one here. “You can train as much as you can recover from.” However, here, I'm suggesting that if (and that is certainly a big if) you are not maxed out in your recovery ability, you CAN INDEED build your workout endurance even to power training.

From this moment on in the article, you must swallow the inarguable fact that if you don't know how to recover from 3x3 in short order, you can give up on this right here and read some other article. But if you agree to the maximum that the harder you train, the harder you must work at recovery, then let's talk through this idea. If your recovery “plan” is just waiting a certain number of days between workouts, you don't understand! That’s not a comprehensive recovery strategy.

If Prefontaine could build his sprint capacity past the normally accepted limits of sprinting (analogous to power work), might we be able to do something similar in the gym as opposed to the track? It seems likely. But we must throw off preconceptions. We must think like Steve did.

Here is what I've done with more than modest success.

The Rule of Five Power/Endurance Protocol

Use compound gross motor movements. Squat, bench, and power clean are good examples. Small muscle groups are not well suited. The entire workout consists of five sets with a five-minute rest between sets. Each set is broken into five groups of five reps with a 15-second rest between groups for a total rep count per set of 25. If this is repeated for the full five sets, it adds up to 125 reps per workout. There it is. Simple. Effective.

The workload must be found over a series of ascending training sessions, each increasing the weight until it is just possible to finish only the fourth set of 25 and failing on the fifth group somewhere between 15 and 25. It may take a few sessions. Start too light rather than too heavy.

When the entire 125 reps can be completed, an increase in workload is warranted. This should happen at a regular consistent rate for approximately 6-10 weeks. At this time, a return to more conventional power protocols will seem easy and perhaps even fun. The conditioning effect will be mostly maintained with no additional workouts assigned for that purpose. After the appropriate training cycle peak and recovery, a return to the Rule of Fives should be nearly at the place that was left off or easily recovered and then trained upward again to a new high.

The program is: 5x25 in which each set of 25 is broken into five rep groups separated by about 15 seconds and each set is separated by five minutes. Total 125 reps. That is, five sub groups of five with a five-minute rest in between, repeated five times over. Rule of Fives.

It is not uncommon to build high volumes of lactate the first several sessions. Be prudent, and AVOID VOMITING. That is no marker of intensity; it is only a marker of being unable to dispose of blood lactate in the liver at a fast-enough rate. Spare yourself the trauma, and take extra time between sets or reps until the liver enzymes accommodate. Fewer than two weeks is sufficient. You will be able to hold pace at that time. If you puke early on, you'll have a harder time “loving it.” Take it slow at first, then go full tilt later.

Make no mistake—this is not a recipe to “train light” or “volume train.” It is as heavy and hard as you can tolerate, and it will be a certain gut-check for those unfamiliar with balls-out training. This is not permission to take it easy or to lighten the workload any more than is demanded. Keep the load as high as humanly possible while still being able to finish.

This is an on-the-clock workout, so any warm-ups are off the books and not recorded. Remember to prepare during a warm-up and not fatigue! Only do what you need.

Your ability to maintain a higher level of focus and to resist errors due to the onset of fatigue during your next normal power cycle will forever sell you on at least intermittent cycles of this type of training protocol. This is mine. I found it wildly successful, and it eventually became fun, and I looked forward to it. The pressure is off. You just hit the numbers. It takes intensity but little concentration. Feel empowered to modify it to taste and according to need. But please don't water it down and still call it mine. Keep the spirit of the thing intact. If you want volume work or conditioning training, use some other program. This is for the sole purpose of increasing the “workout endurance” of a normal power program. It is not for strength or size. It is not a typical conditioning run. It is for lifters to be able to concentrate better in their normal workouts and to feel less fatigued by them. My reasoning is that fatigue, whether mental or physical, leads to technique breakdown and an increase in the chance of injury. In many ways, I view this as an injury prevention protocol.

You may be able to add a set or two to your normal protocol as well.  More heavy proper lifts equal more potential progress.

Remember what I said about recovery, though! You don’t want to out-strip your ability to recover with your new ability to train extra!

If you decide to take the blue pill and begin this protocol, then do so with a full commitment to finish. The benefits accrue at the end, and you can't expect to see the kind of improvement I'm promising if you quit on it halfway through. You don't get half the results by going halfway in anything in life! Do or do not. There is no try!

That said, give this a try!

Repeat as in set one, and go home.