In With the Old, Out With the New

I despise referring to myself as old, but the hard reality is that I am. I don’t like to admit that I am old because I don’t FEEL old and I don’t believe that I act old – or mature, responsible, professional and the list goes on and on. I don’t act or feel old until I find myself in the gym, bitching and complaining – to myself – about, believe it or not, the workouts being shown via video loop on the TVs.

For those of you who do not understand what I am talking about, I will expound. A video loop is a rotating “loop” of videos that play non-stop on the TVs in some gyms. They usually involve someone working out who is in good shape, quite muscular and sometimes are women who are in great shape and attractive. Now, this is all new to me because until I moved to Florida I had not seen this before. I did a lot of my training at Armbrust Pro Gym in Colorado and there is no need for video loops because all you have to do is look around the gym and see a ton of pros - male and female - from almost every competitive division.

I understand that this might seem trivial or insignificant to some of you, but to most of us older guys, we get it and most all of us feel the same frustration. Why? Because bodybuilders my age started training during the 80s or early 90s when people only worked out to get HYUGE.  There were no Crossfitters. There were no physique competitors. We didn’t just work out to “get in shape,” we worked out to get big and strong and look like bad-asses. To push my point even further about how different it was then, the only contests with the word “bikini” in them were Hawaiian Tropic Beauty Pageants and those contests were only in bars. 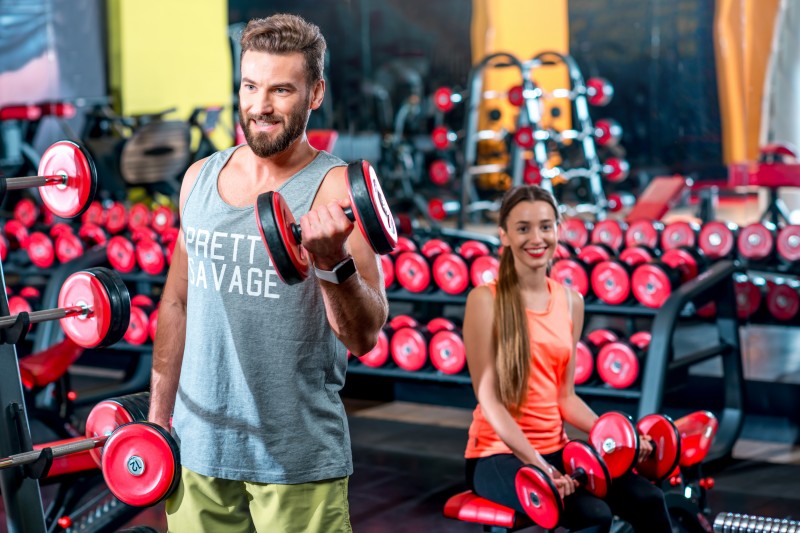 When I am in the gym working out, I do not want to see a 20-something-year-old douchebag on the gym TV working out with no shirt on, weighing 185 pounds at 5’11”. I don’t want to see him getting two reps on his own, with bumpers equaling 225 pounds on the incline bench, only to have the cameraman cut away from one angle to show another angle that makes it look like this dipshit is getting another three reps, when these added three reps were filmed on the next set. The majority of a bodybuilding gym’s demographic is going to be older than 40 and I know I am not the only person over 40 that doesn’t find this type of video loop appealing.

What else do I not want to see?

I do not want to see this same guy with a Harry Styles haircut finishing a set of triceps pressdowns acting as if he is Tom Platz who just finished one of two sets of squats with 315 for 50 reps. I have seen things more pathetic than this, but if you asked me to come up with one right now, I doubt I could.

Why do these douche-guys make up lame exercises? Have you ever seen anyone with big shoulders do that stupid rope-wave thing? I’m just asking because I have not. I have also never seen someone with big legs do these jumpy-alternating-lungey things (just made up that entire hyphenated word on my own) where you do a lunge for one leg and then explode your skinny-self into the air and while in the air you switch legs to land and descend for another lunge with the other leg. If you have, please name names because I don’t believe it has happened in my lifetime.

LOOKING at these guys on the TV while I am training is bad enough, however, LISTENING to them give advice or say anything, at all, is like nails on a chalkboard.

Now, I agree that I am training and I should not care about what anyone is saying or doing on these videos. Still, you have to admit that if you were watching what I have to watch daily, you would eventually think to yourself, “I wonder what this dumbass is actually saying?”

RELATED: Minimal Effective Dose and the Search for Magic Bullets

That is EXACTLY how I got to the point that I took out my Jaybirds and asked the guy behind the counter to turn up the audio so that I could hear what this cat was saying. What did he say? Basically, all of the dumb shit you hear on IG and YouTube including cringe-worthy inspirational attempts to sound articulate and typically archaic drivel like “this exercise shapes the muscle” along with one of my favorites, “I have done these for years and this is how I got so big.” Seriously? BIG??

You might be thinking, “Whoa, Skip, why does this bother you so much?”

I’m older, but I am still a bodybuilder. There is nothing that any of these kids could say that I could learn from or even care to hear. There is a part of my ego (I’m being honest here) that doesn’t want to hear or see somebody who has been doing what I do for a fraction of the time, give advice on something he knows so little about. It’s borderline insulting. I am a bodybuilder and I train at a bodybuilding gym and the last thing I am going to find motivating is some 25-year-old, douchey-looking kid (but does have a smaller waist and prettier face) who can’t out train me, isn’t bigger than I am and isn’t stronger than I am (and I am NOT very strong). And please understand that this is not about jealousy or resentment, etc.. This kid had a very athletic build with a small, tapered waist, young skin and was good looking. Those things don’t qualify him as “douchey.” If he wanted to be much less douchey, he could have said that he was “fit” and gave information if you wanted to look “athletic, fit and toned” instead of using words like “HUGE” and “BIG.” I do not complain about seeing John Meadows who is on one of these loops or someone comparable who would DESERVE to be there.

What did I do about this video-loop saga? I did what any other old-ass person does that doesn’t like something in this world: I complained, but I complained in a way that I was convinced that I was not complaining (because that is what old people do).

What happened? They stopped playing the douchey-kid videos! I won! Yeah, not so fast.

Instead of the douchey-kid videos, I now get to watch deadlifts and cleans performed by women who have shorts on that are roughly the same size as a thong and all 72 camera angles are from below the waist with an overt sexual connotation. These damn kids, I tell ya. All they care about is getting themselves … HEY! YOU KIDS GET OFF MY LAWN RIGHT NOW!! YEAH, YOU, YOU UGLY LITTLE BASTARD! DON’T MAKE ME COME OUT THERE!!

Now, what was I saying? I forgot.