Is Getting Strong as Simple as Wiggling Your Toes? 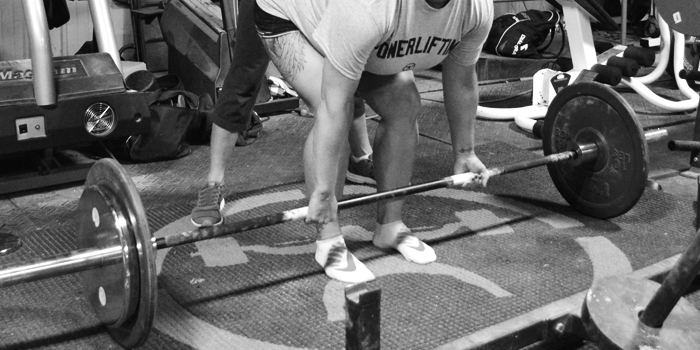 I’ve been training for a long time—32 years in some form or another. It all started with a sand-filled set of plastic weights and a rickety bench in the basement when I was about 10-years-old. That old bench would probably collapse under my weight right now, but I digress…

It’s been a fun ride ever since. In all those years, I’ve followed many different training programs and picked up a lot of tips and tricks. I’ve spent a lot of time and money getting advice from different people on how to get bigger and stronger. Have you ever noticed that it's always the simple, almost obvious bits of lifting advice that have the most impact on your lifting? It’s always one stupid little phrase that transforms how you approach a lift and leads to breakthroughs in your training.

Louie saying “push your abs out,” Dave Tate saying “tear the bar apart,” and Mark Watts saying “put your shoulder blades in your back pocket” all come to mind. Mark’s line is particularly useful when working with female athletes because telling a woman “big chest” is just awkward as hell. Today, I’ll introduce you to (or remind you of) another awesome bit of simple advice that has done wonders for my lifting when I had the sense to follow it.

Let’s backtrack a bit to what led me to seek out this bit of advice. I compete as an amateur Strongman and one of my better lifts is the log press. Zydrunas Savickas doesn’t lie awake at night worried about me crushing his records, but I’m reasonably good at overhead pressing. For whatever reason, a couple years ago I developed an incredibly frustrating case of happy feet on my press. To this day, I have no explanation why, but as soon as I got the log into the racked position, I started dancing around. Every overhead pressing set became a Dancing with the Stars audition. And it wouldn’t go away. I tried a bunch of different things. I changed my foot position. I tried dipping deeper. I tried dipping lower. I tried wearing a Spud belt. I tried wearing a lever belt. I even tried wearing squat briefs, which made getting down to pull the log off the floor a peach! Nothing was working. The low point for me came when I only hit six reps with a weight I had been manhandling for 10–12 reps just a few months prior. The six-rep performance naturally came in a contest. This wasn't a happy time for me.

After wading through the swamp of idiocy for a couple months, I finally decided to go back and watch all my Dan John videos again in the hopes of finding a clue. Dan isn’t a Strongman competitor, but I hear he knows a thing or two about lifting. Dan just has a way of simplifying things that is unmatched, and I had a gut feeling that I might rediscover something in his videos that would help with my problem.

As I watched one of the videos, I noticed Dan cueing his lifters with the phrase “wiggle your toes.” Dan explained that if you wiggle your toes, it forces you back on your heels. On the Olympic lifts, you want to drive through your heels. I had a Eureka moment after hearing that cue used a few times. Mercifully for all involved, this didn't involve me running through the town naked, but I did run straight to the Obetz Powerhouse Gym (my garage) to test my theory. I grabbed my log, cleaned it, wiggled my toes, and watched my happy feet problem disappear in about ten seconds. Major score for the gut feeling.

So wiggle your toes when you train. The lifts you save could be your own.