In my 40-plus years of training in the gym, I have probably tried every imaginable variation in training theory. As Louie’s words echo into eternity, “Everything works, but nothing works forever,” it is important to keep trialing various methods to ascertain the efficacy on yourself and then those you train.

Many authors have also delved into the topic of training at least twice a day and often more. I don't know if this was created with the Bulgarian weightlifting philosophy of five sessions a day or the work of Hatfield back in the 80s. This form of training has been popularized by Poliquin, Thibadeau, and Schoenfeld, among many other writers and researchers, and taken to even greater extremes by Leo Costa in his book Big Beyond Belief.

Even though my personal training philosophy has always been that “athletic big is a by-product of strong,” certain players have programmed two-a-day upper body sessions both in the pre-season and during the playing season itself. I found it worked best by utilizing strength and power movements and training protocols in the morning session and then returning for more strength and size programming in the afternoon.

Another style I have used is listed below: 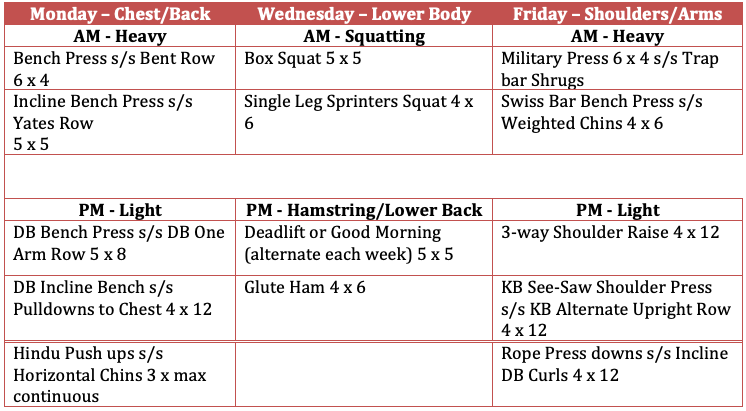 It is quite possible to use exactly the same movement in both a morning and afternoon workout, but use a different method in each session. For example, use an Earthquake bar in the morning session, and in the afternoon use a straight bar or a Swiss bar for the bench press. This is one method that I have been trialing myself over the last few weeks. I've found about a five to seven-and-a-half percent increase in my afternoon session with the Swiss bar compared to what I can achieve without using the Earthquake bar in the morning.

Many years ago, I decided to follow the Bulgarian approach but only with the front squat. I trained the front squat three times a day on Monday, Wednesday, Friday; twice a day on Tuesday and Thursday; and a single session only on Saturday. Each session was controlled by intensity and volume with sets and reps and load manipulated. The result of this 14-session front squat week was amazing. Following a few day's rest, I tested out at 11 percent higher for my 1RM than when I had started the program. Also, my clean, by which I had not trained over the week, increased by seven percent. Something of a shock micro-cycle, it certainly lived up to the hype. I could not maintain the sessions and this became just a one-off experiment. 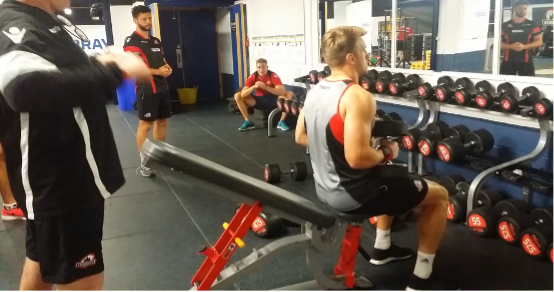 Less is certainly more when you transition into this type of training and depending on your personal resiliency, you may wish to stay with this method of training for one, two, or at most three weeks before returning to a more traditional approach.

Each workout should not exceed 45 minutes. I would try and schedule heavy and basic barbell movements in the morning session with reps in the two to six range and six to eight sets. Use machines or dumbbells/kettlebells with reps in the eight to twelve range and three or four sets in the afternoon. Another schedule could be, although I have yet to try this method, is to do major compound barbell exercise’s in the AM session (two- six rep range), then dumbbell movements at lunchtime (six to ten rep range) and finish the day off with machine movements (10 to 15 rep range). I have tried this as a three-day-a-week protocol with a great deal of success with players but never as an all-in-one-day program.

Let me know if you give it a go and I will also report back when the opportunity is ready to give it a trial.