Resist the Urge to Compete 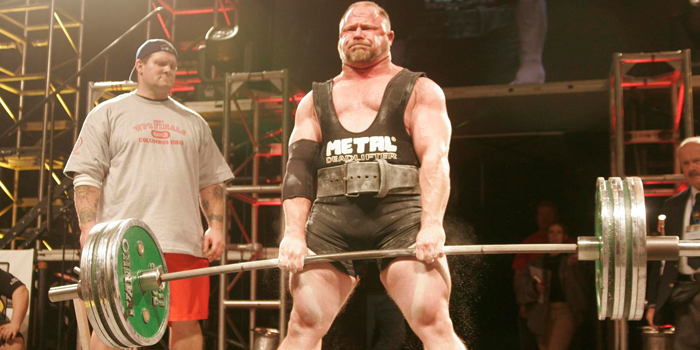 Social distancing and stay-at-home orders have affected everyone, the strength athlete being no exception. Gym closures and contest cancellations have created a weird time in most athlete’s training careers. Never have any of us seen so many creative uses of resistance bands and bodyweight movements, that’s for sure. Thankfully, at some point, this will pass, and your training will get back to normal. You will even get to compete again, hopefully someday soon. In this article, I intend to give you some general advice on working back towards that first meet post isolation.

My assumption: This is important. I’m assuming you have had very little access to a barbell for several weeks. Some of our readers are fortunate enough to have great home gyms, who probably haven’t had to modify their training much at all. My advice here is for the people that don’t have great home gyms, the ones limited to bodyweight exercise, bands, and maybe some dumbbells.

I know it will be tempting to immediately start training heavy and look for a meet as soon as the gym reopens. I’m betting that in the 6-8 weeks after the quarantine ends, a lot of contests are going to happen. My advice: Resist the urge!

RECENT: Dropping Weight as a Powerlifter

You probably won’t be satisfied with your performance, at a minimum. After weeks of only doing pushups and air squats, your body is going to be detrained and not prepared to go right into contest preparation. You will probably be at higher risk for injury since technique is going to be rusty, and you simply aren’t physically prepared to train at full intensity. By all means, mitigate this as much as possible and keep doing the home workouts that you can get done. Get nutrition locked in and do stay active while the gym is closed. While detrained, this will minimize the effects of being out of the gym for so long.

Unless you have a home gym, I wouldn’t advise competing immediately after the gym is open again. I think there is too much risk and that the results will be disappointing for many lifters.

Let’s flash forward to when the gym does open back up, and you have full access to barbells and your natural training environment. What do you do? My thought process is three phases long before competing.

This phase would be the first 3-6 weeks back. I’m thinking about this in the same way I think about ramping back up after a contest and subsequent post-meet deload. The focus here should be “knocking the rust off,” getting technique back as close to perfect as possible, and rebuilding a base of strength and conditioning. Hopefully, if you get after it with home workouts, you aren’t super weak, but it will take a few weeks to adjust back to heavier loads. Use this time to reacclimate to the bar.

Rather than outline a detailed program, I’ll set out a few guidelines. First, focus on the basics. This isn’t the time to get super creative with different loading patterns, specialty barbells, and complicated periodization schemes—just squat, bench press, and deadlift with moderate volume and intensity. Keep the reps low and load moderate, focusing on perfect technique. I think the overall workload should still be pretty high, so lots of sets are appropriate here. Don’t push to failure. Instead, do quality work and move perfectly. The same idea applies to assistance work. Pick basic stuff that you know works for you. Also, it's probably a good time to play fake bodybuilder and spend a lot of time on the machines really focusing on strong contractions and volume. This phase isn’t meant to make you strong; it’s meant to get your body used to weights again and reinforce technique.

Pre-season training comes after a few weeks of rebuilding your conditioning, while good movement patterns are reinstalled. Your body is used to the barbell again, and the rust is gone. Now training will start to feel normal(ish), and you might be looking at contests. Resist the urge, and don’t do it quite yet!

The next phase should be what some people will refer to as an off-season. For these purposes, I’m going to call it a pre-season. Now is the time to start to get strong again and prepare the body for a contest prep phase. Many of the same guidelines apply from the last few weeks. Since you had such a long layoff, simple exercises are likely to work well, and simple structure to your training will probably pay off.

I think you should devote another 4-6 weeks focusing on “pre-season.” Some guidelines for this phase will be to up the intensity a bit and start to handle heavier loads. Percentages probably aren’t going to be useful as the previous PR you are basing them off of might not be applicable anymore. I’d rather see most lifters use an RPE type of system and focus on achieving 7-8 out of 10 efforts on most movements. In terms of selecting assistance exercises, similar ideas as previous; keep it simple. Consider what movements have made you strong in the past and don’t over complicate the work. I know for me some primary movements are the pause squat, incline bench, and 4-inch block pull. I might add a little variation by using different bars such as the Yoke Bar or a neutral grip American Press bar, but after some time off, I don’t think I would need more variation than that.

My final guideline for this phase is don’t skip the deloads and exercise some restraint! I know people will want to get in and throw heavy weights around. Remember that this is a long game. Blasting away right now might be fun but also puts you at risk for injury, overtraining, and shortening your competitive career. Don’t throw it away because you missed being in the gym. Take deloads as needed and remember that this is a pre-season phase, a type of training where you typically wouldn’t push to the absolute limit.

Now you should be several weeks post isolation and back in the gym. You’ve completed several weeks of training and are looking at meets in the near term. It’s also where my advice ends for you. By this point, you should be reconditioned. Your technique should dial back in, and the base of strength rebuilt. Whatever small amount you lost while out of the gym has probably bounced back. If you took care of your nutrition during and after isolation, your bodyweight is probably about right, too.

Now that you’re looking at meets, my opinion is that you can return to whatever is normal training for you. You can spend the next several weeks getting ready for the meet how you normally would, putting the first portion of 2020 behind you and returning to competition.

In summary, the most important advice I can give is to practice restraint and discipline once you make it back to the gym. Accept the fact that being away from the barbell for a while has probably negatively affected your strength but that if you come back correctly, that downtime will be a benefit. Work back to pushing the limit over time, be careful about it, and remember that strength sports are a long game.