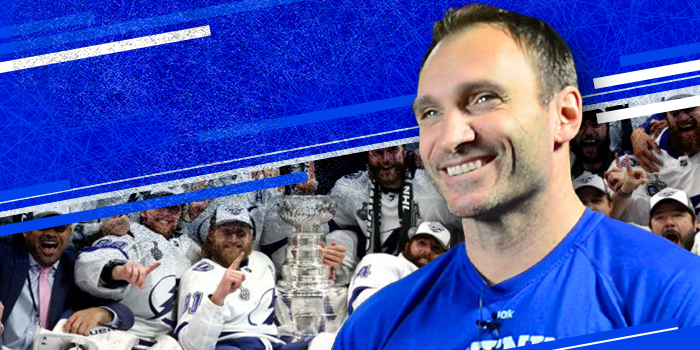 Congratulations to Tampa Bay Lightning as they take home the Stanley Cup on September 28th, 2020!

An NHL season typically ending in June, the entire season was delayed from March 11th until the beginning of August because of the pandemic.  where their first bubble game was played on August 3rd against the Capitals.

The Lightning's first-round match-up with the Columbus Blue Jackets included an epic 5-OT win in game 2 (the fourth-longest game in NHL history) propelling the Lightning to a 4-2 series win.

During the second round, Lightning played the Boston Bruins, winning the series 4-2. In the Eastern Conference finals, the Lightning beat the New York Islanders, also winning that series 4-2.

In the Stanley Cup Finals, in an empty arena, the lightning faced off against the Dallas Stars. Once again, winning the series 4-2 to capture their second Stanley Cup.

In this 2017 interview, Tampa Bay Lightning strength coach Mark Lambert shares his progression as a strength coach, starting at the very beginning when he rented space at big box gyms where he would bring his clients to train. He speaks in detail about what it's like to train hockey players, both at the professional level and at the youth level utilizing elitefts equipment.

Mark Lambert's path to strength and conditioning, the Tampa Bay Lightning, and Axxeleration Performance Centers began when he experienced for himself the value of intelligent strength training. As a self-described small, weak college freshman, Lambert didn't make his college hockey team, despite having been a hockey player for most of his life. Motivated rather than discouraged, he spent the following year training with several football players and came back bigger, stronger, and faster. This time he made the team.

Lambert continued on with his education and love for athletics, receiving a Masters of Science in Exercise Physiology and becoming a strength coach in 1995. As a young strength coach in the late 1990s and early 2000s, Lambert read much of the work of Louie Simmons and Dave Tate. He became a supporter of elitefts and has outfitted his facilities—both for the Tampa Bay Lightning and for Axxeleration Performance Centers—with elitefts equipment.

Currently the Strength and Conditioning Coach for the Tampa Bay Lightning, Lambert spends the competitive season in Florida with his team, and then returns to Montreal during the summer (NHL's off-season), where he manages his business and coaches athletes at the Montreal Axxeleration Performance Center location.

Axxeleration, which Lambert says "takes care of hockey players", is built on two main principles: power = force x velocity, and force = mass x acceleration. Lambert and his staff at Axxeleration use these formulas to drive the day-to-day training of their clients and to build the strongest, fastest, and most powerful athletes possible. The maturation of an athlete and his or her individual needs should also guide the training approach, Lambert says. For instance, a 16-year-old hockey player is going to require substantially more hypertrophy work than a 27-year-old hockey player might. What remains constant is explosiveness; Lambert wants his athletes to skate faster, jump higher, and be more powerful.

Lambert also discusses the differences between in-season and off-season for hockey. Unlike football, hockey only has a 12-week off-season, leaving the athletes a very short period of time in which they must build as much strength and power as possible in preparation for the season. For the Lightning, the travel and competitive schedule during the season can pose additional challenges, sometimes allowing the team to only train once per week — and not always on optimal equipment. Lambert explains how he works around these challenges to keep his athletes physically prepared for the demands of the game.