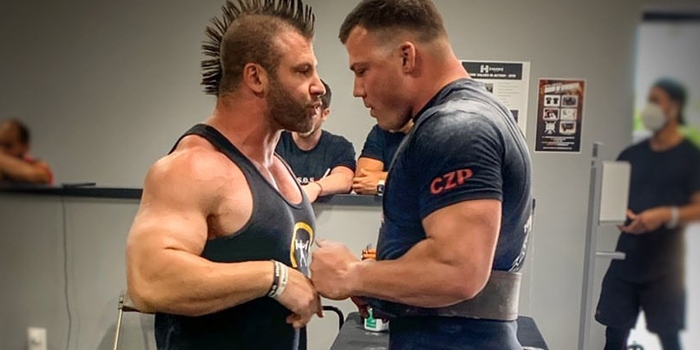 Learning From My Mistakes

Coming off of a not-so-great-performance, going 6 for 9 in January of 2020, Christian Anto and I sat down and had a good conversation about how we would move forward. He pointed out my weaknesses and critiqued my technique—where my weaknesses caused me to miss a lift or work harder than I should to finish the lift. Fatigue management, which is something he has taught me over the past few years, means not gassing yourself out for a big PR on one specific lift when you have more lifts to come. Too many lifters seem to get caught up in one lift and spend way too much energy without considering they have the rest of the meet to complete. There is always a give and take or risk and reward where the risk is often not worth the reward.

We also discussed how I was a bit overzealous and overreaching for an elite total that was not there just yet. I knew I was getting close to an elite total and had unrealistic expectations at the meet in January. After taking a step back, I took the time to focus on my weaknesses and technique during my off-season and meet prep leading up to the AFP Show of Strength in Allen, Texas. I realized that I was allowing my nerves and anxiety to get the best of me when I needed to be the calmest. This goes hand in hand with fatigue management that I mentioned above. Throughout my training for the next seven months, I didn't allow myself to get overly aroused or emotional for a lift. I struggled hard with this on max effort days and especially on deadlifts because deadlifting has always been an aggressive and almost angry lift for me. Technique over aggression, this took a while to get a handle on, which in turn led me to struggle mentally with my deadlift the entire prep leading up to meet day, August 15th. Being the powerlifting princesses that we all are, I would complain to Anto, “I do not like how this feels,” or “it felt slow and weak,” and everything thing else I could think of. As usual, Christian would instruct me to be patient and trust my technique and that the speed and strength would come later. I basically had to get over myself, meaning I had to get out of my own head.

RELATED: How I Teach the Squat

Training for a meet in 2020, let alone training in general, as we all know, has been crazy and uncertain due to COVID-19. Luckily, I own a gym that happens to be on my private property, so I kept training without missing a beat. My technique was solidifying, and I had built up my weakness very well aside from my deadlift.

Around ten weeks out, I received an email saying the meet would be pushed back a few weeks. As anyone who knows how training for a powerlifting meet goes, you know it's brutal and takes a toll on your body. I knew this could screw up a lot of the progress made for several reasons. Yet my biggest concern was peaking too early. I gave Anto a call, and a decision was made to make a few changes. One of those changes was to add a deload week to minimize the damage to my body. This happened to be a blessing in disguise, and the extra time was what I needed to keep working on the deadlift and work through the technical issues and mental hurdles I was dealing with. 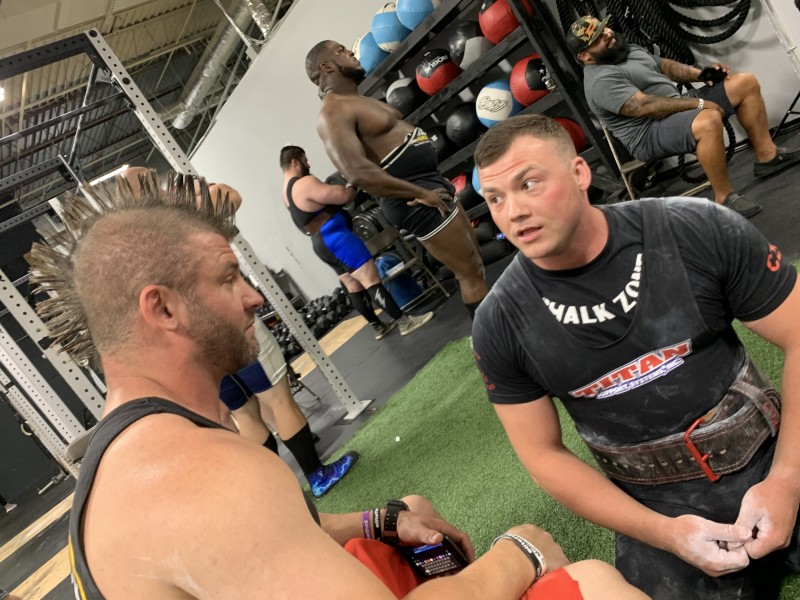 Throughout my powerlifting career, I have had the goal of becoming an elite level lifter. Cutting weight is a factor when making weight for any class you want to total elite in. Cutting weight is something everyone seems to say you shouldn’t do unless going for an ATWR and other various reasons, but I didn’t care about that. My goal was personal, and I knew why. I wanted to become an elite level lifter. I realized to do that, I would have to cut weight. After my poor performance in January, I decided it was time to take my nutrition and weight seriously. So, I decided I would not allow myself to get more than ten pounds over my weight class.

During my off-season before my meet prep, I cut down and focused on body composition and building a bigger base, which should allow me to get stronger in theory. At a lower body weight, I understood this would allow me to increase my calories once I started a strength phase of my meet prep. Consuming extra calories while training heavy made a big difference! Around eight weeks out, I started switching red meats for chicken on my off days—the only difference I made in my food intake for the next six weeks. This easy and simple adjustment allowed me to drop four pounds over the next six weeks. I peaked perfectly while not having to worry about my weight. Two weeks out from my meet, I was weighing 226 pounds. I paid close attention to eating a clean diet, making my weight manageable without being miserable.

Thursday, the day before weigh-ins, I woke up at 224 pounds, which allowed me to snack and sip on water throughout the day. My wife and I decided it would be a great idea to spend the day going around Dallas with Christian, Julia, and their kids—a great way to keep my mind off being hungry. It was much needed time spent with friends and family. At bedtime, I was at 221 pounds. Knowing I normally fluctuate two pounds overnight, I knew I’d be in a safe spot, and at worst, I would have to soak in a hot bath for 15 minutes to cut water before weigh-ins. Fortunately, I woke up at 219.6 pounds. I was “golden” in the words of Anto. If it were not for my personal experiences of previous weight cuts, I would not have known how to make this weight cut work so well. 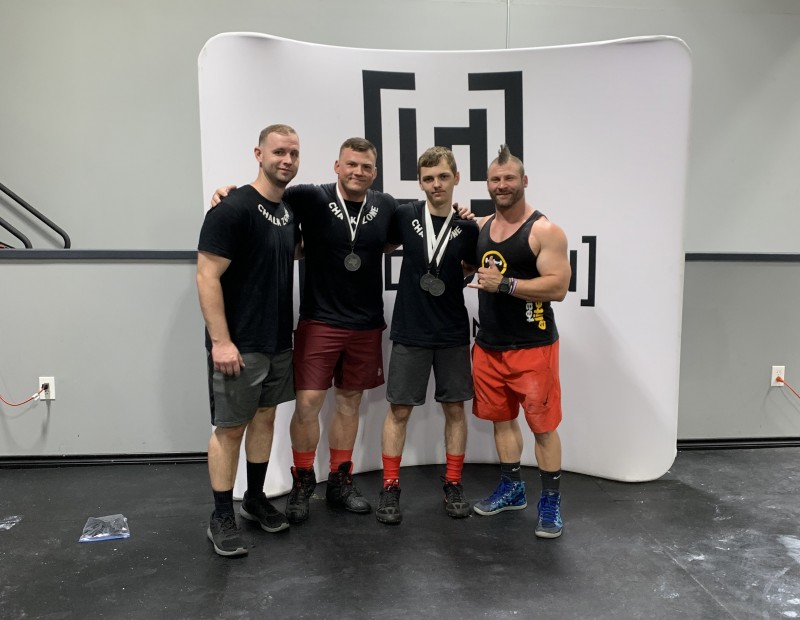 Waking up the morning of the meet, I had the normal nerves and excitement that anyone would have. After getting ready and meeting Christian at the hotel lobby, we picked up something to eat while heading to the meet. Before and after the lifter's meeting, we took time to stand around and talk a little bit. We discussed a game plan and a few technique details.

Then we started warming up for squats. During squat warm-ups, Anto continued to assure me of my technique and how well I was moving. Neither of us could see any critiques or adjustments that needed to be made. Squats moved very well and had been all prep. Christian wanted me to take a lighter than normal opener to use as the last warm-up before going for my second attempt, which turned out to be a fantastic idea. This made my second attempt feel like a true opener, and I was extremely confident in hitting my third attempt of 622.8 pounds. Going 3 for 3 on squats was the catalyst I needed to go into the bench confidently.

Bench warm-ups went well, and things felt good. Christian noticed I was pressing the bar straight out during my opener and second attempt instead of pushing slightly back towards my head at lockout. I adjusted, and in my opinion, this tweak was the only reason I could lock out my third attempt of 385.8 pounds on bench.

Now for the fun part. Deadlift warm-ups moved good, but at around 400 pounds, I started to get a little off balance. Christian suggested that I delay bringing my head up after my preload (taking the slack out of the bar) just before starting the pull. This small adjustment fixed everything—my balance, speed, and lockout. After warm-ups, there were a few delays in the meet leading up to my attempt based on not having the proper equipment to clean the bar, the projector screen was messing up, and there was no kilo chart calculator. I was able to walk around and keep my head clear and focused, not allowing it to get to me. Christian kept me focused and calm. This was a huge hurdle for me since I struggled so hard keeping my head clear and focused throughout my prep with deadlifts. My confidence was never there.

Once I could approach the bar leading up to my opener of 600 pounds, I vividly remember Christian yelling technique from behind me towards my left side. This helped focus me enough to execute a perfect deadlift. I had all the confidence going into my second attempt of 655 pounds. At the time, I had no idea what weight Christian had picked. He assured me that I was strong enough and technically sound to make this weight move. After successfully pulling 655 pounds, Christian asked me, “Did you want to go for the elite total, or do you want to out pull me and secure the elite total?”

Before I was able to answer, he looked at me and said, “It is there!” His confidence in my ability was all I needed, so I told him, “Screw it, I want to out pull you.” I knew that in order to reach my goal, I would have to successfully pull this third attempt. As I was getting ready, right before my name was called, Christian continued to reassure me that I was technical and strong enough to pull this weight, and it is time to make my splash. Then came the loving slap from Hades to the back of the neck for extra encouragement. This helped way more than expected. At this point, I still had no idea how much weight was on the bar. I remember approaching the bar and feeling almost numb. I knew this was an important moment for me and my powerlifting journey, and it all would come down to this last deadlift.

Fortunately, I was able to successfully pull 683.4 pounds. To end the day, I went 3 for 3 on deadlifts, and totaled 1692 pounds at 219.2 pounds body weight. I went 9 for 9 on the day and added 100 pounds to my total, winning the weight class. This experience was so much more than I ever could've imagined. I cannot thank Christian enough, who is so much more than just a coach—he is a brother, and we'll always be family. Also, I cannot thank my training crew at Chalkzone Powerlifting enough for always being there for me.

Zach Fant is the Owner of Chalk Zone Powerlifting Gym in Hope, Arizona. With an elite total at 220, Zach's best lifts are a 622-pound squat, 385-pound bench, and 683-pound deadlift.