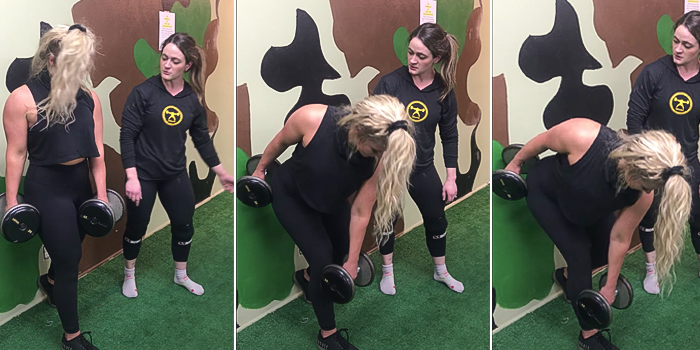 The anti- tin man Romanian deadlift (RDL) MAY look a bit frou-frou and functional. Did you know it also has some fantastic benefits, namely in the form of accessing planes and ranges of motion that most of us forget even exist? Learning to access these planes and ranges might be the best way to fight off feeling like a two-by-four from our traditional heavy training. Even if you’re okay feeling like a tin man, learning to access and control rotational motion might actually improve training quality of other heavy movements for either size or strength. Progression will be best when both the nervous and muscular systems are ready. As much as you may feel the tin-man training acquisition might be musculoskeletal, there’s a tremendous nervous system influence in that. This exercise can help synchronize readiness between systems.

This gal had seen me for physical therapy a few times and works with a really incredible coach who I KNOW appreciates the idea of tri-planar motion, so when she approached me after one of my working sets saying she couldn’t really feel much happening with this exercise, I already had an idea of why she wasn’t getting the intent out of the exercise.

Tri-planar is code for control front-to-back, side-to-side, and rotation clockwise and counterclockwise, aka athleticism, and the anti- tin man feeling that MOST of us who have trained hard and heavy for any period has felt. Tri-planar is the anti- two-by-four feeling, but most of us who have trained hard have a tough time accessing it, which is a shame because it can make you feel loads better AND improve neural real estate, which can improve training quality.

RECENT: My Left Glute is Not Activating

Before getting into the demo, note that most RDLs should NOT be performed this way. Keri’s coach had shown her a video of what he wanted to be executed, and it included rotation. To access rotation, other planes and pivot points need to be controlled and opened. The purpose of many other RDL variations is meant actually to control or prohibit rotation and seek stability and tension for strength, hypertrophy, or control purposes. If you’re doing a standard RDL with cues to keep hips square, that cue maintains priority for most B-stance or even single-leg variations. One of the big reasons I’ll prescribe single-leg variations for an athlete is to make sure rotation DOESN’T happen. So before implementing cues, make sure the intent of the exercise is understood.

This exercise has a few different purposes, different from many of the variations mentioned above. Those things are important for a few reasons, and why they are important largely dictate how the exercise can be executed, broken down with their relative importance as follows:

The hip joint, as mentioned in the video, operates in three degrees of freedom. General health and accessibility of each of those degrees changes neurological input to the brain about how much of the joint is “good to go.” The brain allows permissive force production provided the available range also has control. You could think about this like your nervous system giving the green light. Secondarily, for FULL recruitment and development of surrounding musculature, the joint has to be able to access the entirety of its designed range. If the ball never really glides posteriorly in the socket (or accesses that range fully), you can bet that individual probably has a hard time really shifting weight posteriorly. A posterior weight shift is critical for glute and hamstring development and for balancing demands across the load. If you have difficulty accessing posterior motion, be ready for things like low back, quad, and adductor overuse.  Posterior capsule mobility integration is one of the biggest deficits that I see in competitive and recreational lifters. It cleans up a LOT of issues and requires control demonstrated in the video.

I love when someone has awesome hip mobility seated or lying down, but at some point, that will have to be integrated into a standing position. There are a million ways to do this (hip airplanes, for example), but what I really appreciate about this particular exercise is the way it encourages the pelvis to shift the femur. We generally think about hip rotation in an open chain, but most of our rotation throughout the day is closed chain, meaning pelvis-over-femur motion. It’s the motion that you’ll most likely not intentionally encounter in training, but it's this thing called walking. This is one of the big reasons I consider this the anti- tin man. You’re actually shifting and rotating, contrasting from intentional rigidity and the ever-popular anti-rotation. When most of our training is heavy and loaded into rigidity and symmetry, we gradually can lose the real estate mentioned above. Regaining the ability to flex, shift, and rotate restores what motion many of us gradually lose over time.

Unlocking the Spine and Ribcage

This is the most underrated and most powerful recalibration switch because what demand is placed on other joints often comes through how the spine and ribcage can or cannot contribute to meeting the demand of a task. The spine plays a huge role in the position of the hip joint via its control of the pelvis or the socket. With as much as everyone wants to talk about the spine and diaphragm these days, it’s pretty incredible to me how often we fail to acknowledge the role of combined flexion/rotation in both thoracic and lumbar decompression or opening. If you cannot flex your spine, you likely have a hip position that makes rotation mechanically very difficult via the orientation of the joint on the pelvis. Morphologically, the spine is designed NOT to move when we extend by closing joint space and mechanically preventing rotation. This is great if “not moving” (e.g., when you’re under a bar) is your goal, but staying in this position keeps the diaphragm flat, ribcage either forward or flared and prevents rotation. Anyone who knows the two-by-four feeling knows they can’t rotate. Regaining flexion is mechanically required to regain appropriate lateral and rotational movement.

These nerdy things matter because they can play a big role in the effectiveness of your training sessions from both a strength and hypertrophy standpoint. If you’ve ever seen someone that’s completely locked up and stiff, you’ll notice they have a certain look to them—there’s a density, but something about their structure really lacks fullness or roundness. Even their muscle looks rigid and almost non-contractile. Purely anecdotal, but I’m awfully sold on the idea that building a well-rounded physique (which translates to armor for heavy weight handling and feeling and looking better) requires a balancing of dimmer switches, meaning intentional control of all available degrees of freedom.

I wrote about this in 2016, and not much has changed. Thoughts have evolved, but this exercise is a great application of the tip of the iceberg of a lot of these principles.

How and When Do You Implement Something Like This?

Implementation is the easiest part of this because you are using only your available range and not approaching this with a “must have the mobility of a 12-year-old gymnast” mentality. There’s almost no potential harm here. It’s not taxing enough to inhibit recovery. You’ll get a really nice posterior hip engagement (and honestly, most of you reading this will probably get a bit of a shake just from the new real estate) in a way that should leave the rest of you healthy and supported. You’ll improve your ability to connect with hamstrings, glutes, and abs, which can have awesome aesthetic effects (the more often you connect with a muscle, the easier it becomes for the brain to actually use it in training).

Use it at the beginning of a training session, in the middle of metabolic work as a proprioceptive fatigue primer if you have a hard time actually feeling posterior chain, in the middle of your workday if you’re in an office and no one sees you offset some of the rigidity our daily life demands. While you’re there, get a full exhale and actually permit some ribcage and diaphragmatic movement.

One way to summarize all the above information might be to say that controlling degrees of freedom controls how well you control your center of mass by opening up the available range of the “pendulum” of our movement. If you operate on a small section of that pendulum, either right in the middle or shifted towards one side or the other, you’re likely not accessing full potential from a feel good, look good, OR be strong standpoint. Regaining control over three planes of motion might be the best tin man antidote available.