Transitioning from Raw to Gear and Back Again 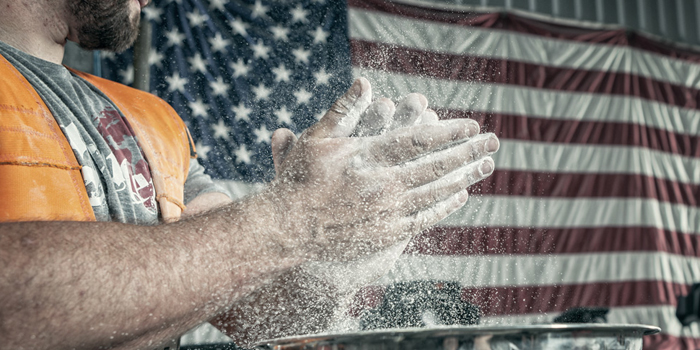 Raw versus gear, the seemingly never-ending debate. Over the course of my lifting career, I’ve thought, “Why not both?” After over a decade of training and competing raw, I took the plunge into multi-ply equipment. I had been around gear plenty over the years. When I first started competing, being a raw guy made me the minority. The meets I did were all equipped with only a handful of raw lifters. At the time, I was training on my own and had always stuck to what I could do using knee wraps. That changed though in 2017, and I finally had everything I needed to try out gear.

Why make the change?

After 10+ years and a lot of success in just knee wraps, one might ask why even bother switching. I had a few reasons. First, I was burnt out competing raw. Not that I didn’t enjoy it, but because I had been chasing numbers for a long time and with the huge rush of new, extremely talented, raw lifters, the top of the game kept moving further away from where I was. At one time, I managed a top-20 all-time total. Now that total was essentially the entry fee to even be considered for the top meets. Pursuing that was exhausting and not fun, so I tried something new to make lifting and competing more fun.

Second, I finally had the right setup. I had a very talented equipped lifter as one of my main training partners and the ideal small facility to train. I had all the equipment, the right people surrounding me, and access to about as much gear as I wanted so long as I was patient enough to wait for stuff to ship. I had everything I needed, and nothing was holding me back.

Third and finally, I have always admired lifters that do well in multiple weight classes and divisions. Two lifters that come to mind are Vincent Dizenzo and Sam Byrd. Vincent is one of the best benchers of all time, and Sam is a prolific squatter. Both lifted in several weight classes, both raw and geared, and put up numbers that were near the very top. I view that as a big accomplishment and wanted to show that I could also be competitive both ways.

Raw to Gear: What was hard?

When I first transitioned over, my training style didn’t change much. I was still using the same basic principles, and my programming looked familiar. Some small changes for sure, but most of the movements stayed the same. The deload timing didn’t change much, and the auto-regulated approach using RPE to limit each day was still there. I quickly assembled a bunch of gear and went right to the “big boy” stuff, going straight to 2- to 3-ply briefs, a shirt, and a canvas squat suit. I was all in, so to speak.

The deadlift was pretty easy to figure out. The hardest part was figuring out how to wear tight gear and still grab the bar. I wore double-ply briefs and a suit that was 2-ply rear/1-ply front. At first, the deadlift sucked, but I quickly learned that it felt much better with the straps up. In just briefs or with straps down, it felt like all that gear was cutting me in half. Once I figured that out and found a setup style that allowed me to get the bar, deadlifting was easy and didn’t feel different outside of the pressure.

The bench was also surprisingly easy to figure out. I was fortunate to have both a raw technique and body that was built to bench in a shirt. Being short, with short arms and a big chest (and belly, I was fat after all), made for a good body to do a shirted bench. My technique didn’t have to change much at all. Add in the fact that my main training partner at the time had benched over 800 pounds. I honestly don’t remember ever struggling with the bench. I messed around a lot and tried several different shirts but always ended up back in “old reliable,” a triple-ply shirt that fits great. I broke it in slowly, worked my way down the boards over a couple of months, and touched easily. The biggest change was having to be patient and very aggressive as I brought the bar down. Bring it down slowly and you’ll never touch. Get impatient and start searching for a touch will put a barbell on your spleen in a hurry. As long as I came down aggressively and was precise and patient on setting the bar where I wanted it, touching wasn’t a problem.

The squat, on the other hand, was brutal. I could never quite get the unrack just right. My stance never seemed just right. The same patience I had in the bench didn’t carry over into the squat. My training cycles were tough, usually pulling it together in the last couple weeks to get it right. I did manage to squat well in meets but not to the potential that I had. Having squatted over 800 in just knee wraps should have meant for a bigger equipped squat, but I never mastered it well enough to get there. I think a lot of the issue was I wasn’t built well for the gear I was trying to use. I have short femurs and a narrow stance. The canvas suit is a much better fit for the wider stance lifter. I always thought about it too much too. It took until the cycle was “do or die,” when it worked, where I would stop thinking and lift. If I ever do go back to gear, I will definitely wear a poly suit and probably a lighter brief to allow for a more natural stance.

After a couple of years of lifting in gear, my situation fell apart, and I didn’t have the right gym or training group to do it anymore. I was pretty sick of it too. In retrospect, I didn’t like the person it made me be. I was completely wrapped up in my training, which made me extraordinarily selfish and a bad training partner.

Transitioning back to raw was pretty simple. The bench and deadlift both came back to me quickly. My technique hadn’t changed very much and neither had the useful accessory movements. I didn’t have to adapt back much here.

The squat was again the most difficult. Part of it was because my technique was a mess. It took weeks to find the right stance raw and get back to feeling comfortable. I had built substantial strength wider, but couldn’t tolerate squatting that way raw. As a result, my narrower stance felt weak and was lost for a while. I also had a series of injuries that made this more difficult, forcing downtime and backward steps.

Ultimately, it took about six months or so to feel completely right again raw. The first meet I did back was hampered by injury but qualified me for another meet. Then, several months later, I set a new baseline total at a lower weight class and raw again.

I loved the challenge of lifting in gear. I think there is value to all powerlifters in trying it out for even just a brief period. That value is primarily in the challenge and how hard it is to learn. Gear helped to teach me how to analyze my lifting and figure out what was wrong. Just being brute strong wasn’t enough anymore. That lesson on its own is enough reason to give it a go.

Transitioning into gear will take some serious time. I was lucky that I learned two-thirds of the lifting quickly. Give this enough time to learn each piece of gear and take it slow, allowing for several training cycles to figure it out. Transitioning out of gear can happen at a much faster rate. Take away the injuries, and I think I would have done it in one, 20-week cycle.

Both sides of powerlifting can learn a lot about training from another. Take some time to experiment with the opposite style and learn a few things along the way!