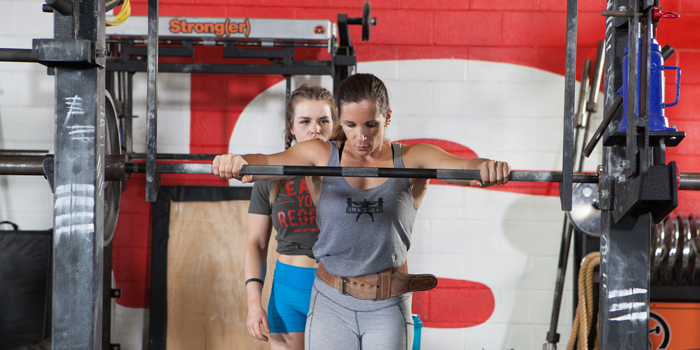 So the patellar tendonitis in your left knee has gotten to the point that it is impeding your ability to continue squatting? Sounds like the life of many powerlifters. One of the biggest roles of programming in powerlifting is to find a way to progress while staying injury-free, but with the weight and toll we put our bodies through to reach the strength goals we are trying to attain, injuries for most seem to be inevitable.

RELATED: Back to Recovery Basics: Fundamentals of Recovery

Coming from someone who is as injury-prone as they get, I have had to learn through experience how to continue training through these issues while still allowing the needed recovery period. With powerlifters and most strength athletes, rehab should be taken with a much different approach than the general population, as we already have the musculature and neurological efficiency, we just now have an irritated muscle or tendon that needs some extra loving. Doing set after set of lightly banded isolated movements is not going to do much when it comes to rehabilitation for someone who can squat double their bodyweight with ease. Instead, continuing to work through the same movements, if possible, with different regressions, is going to prove a lot more valuable in regards to reducing atrophy, maintaining neurological adaptations, and continuing with skill practice.

This practice can be applied to all movements, but specifically, in this article, we will be taking a look at the squat. Let me note that all injuries are obviously not created equal, so issues that are requiring surgery, full tears of the muscle, drastic limitations in the ability to bear weight, or anything major, will need different care during the beginning stages of rehab. These practices will be more applicable to those with the typical overuse injuries that occur often in powerlifting, such as tendonitis, strains, and general irritation of tissues. Also, all of these recommendations are with the assumption that good squat form has already been achieved. If your form is in question, find an experienced lifter who can give a helpful eye in critiquing what needs improvements, as this will be of much greater benefit than anything else within this article. 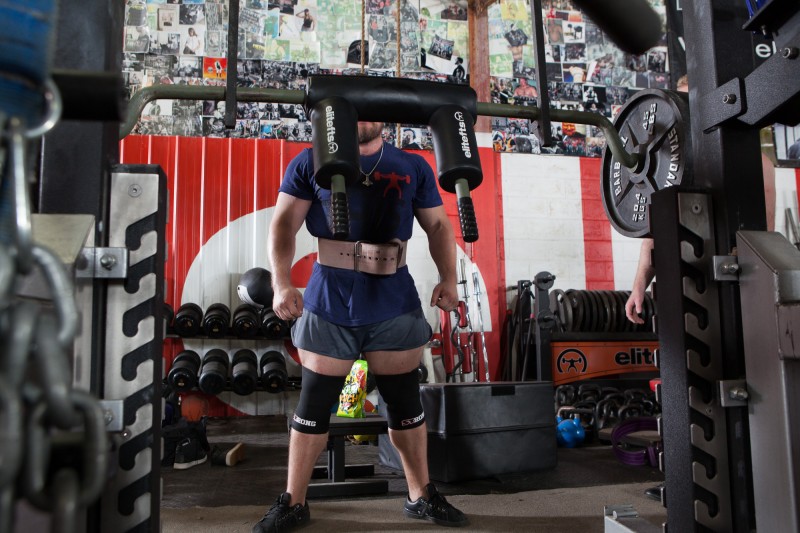 When looking at how to continue to train through these overuse injuries, there are five main regressions and changes I have found able to lead to pain-free movement in the squat: by manipulating the range of motion, squat variation, weight/load, stance, equipment, or a combination of these. First, let’s take a look at what each regression or change would entail, and then we will go through a list of examples of specific things you can implement in your training.

The first thing that I address is asking if there is a particular variation that is causing more of an issue (and vice versa; if there are any variations that can be completed pain-free). If front squats hurt your knees on a continual basis, take them out! We are powerlifters, and unless we are talking about your competition squat, no other variation is a must, especially if it has historically caused pain or irritation. So if the problem can be acutely attributed to one specific non-competition variation, take it out immediately and find something new to fill that volume gap. Easy.

If the pain stems from your competition squat or can be felt during the competition squat due to the increased aggravation from another variation, that is where you may need to make some changes, assuming it is continuing to get worse and limiting your ability to perform the movement. The worst thing you can do is keep pushing through it. I have done that in the past, as I assume most of us have at some point, and the outcome is never good. Allow the pain to subside before resuming normal activity again.

The majority of overuse lower body injuries in powerlifters occur either at the hip or at the knee, so the general rule of thumb is that if you are struggling with a knee injury, gravitate towards a more hip-dominant movement, or if the hip is what is causing the problem, find a more knee-dominant variation. Variations for each particular case will be covered in detail later in the post. 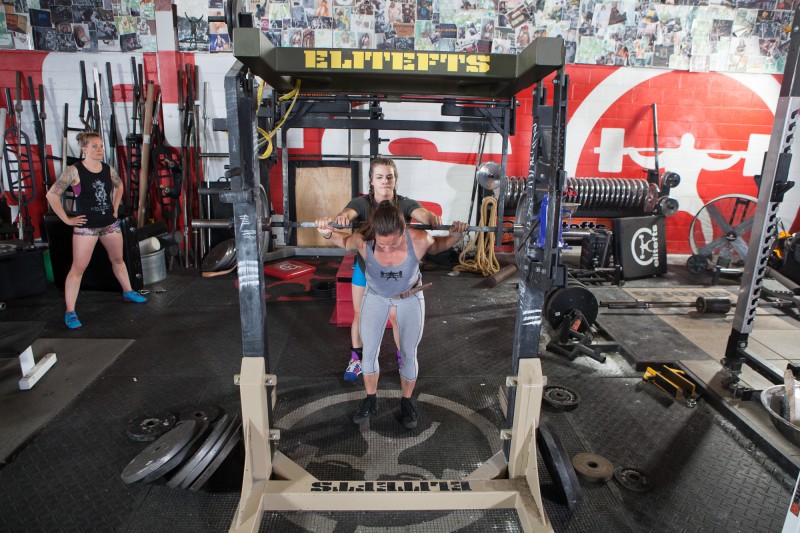 I have found amazing success in using a decreased range of motion, usually cutting my squat right above parallel during times it is needed. Even though it may feel like you are cheating yourself slightly, the stimulus of still allowing yourself to squat helps greatly in the long run with maintaining strength and reducing atrophy by continuing to introduce a progressive load to the muscle.

Even though this may seem like the first thing to address, I usually do not address the amount of weight used until after exhausting options within variation and range of motion, with the exception being back issues. This does not mean to force yourself to keep lifting heavy through pain, but it means that if you are able, continuing to lift at a higher intensity is going to produce a greater training effect than having to decrease the load, as long as it is pain-free. Most of the time a decrease in load will also accompany some type of change in variation or range of motion. This does not always hold true, but the key here is to find whatever combination of regressions you need to continue to train but in a pain-free state.

A well-known and successful method of weight regression to a rehabilitation state is the Bill Star rehab protocol. An even simpler variation is just to reduce to a weight that is pain-free for three sets of five, and increase the load five pounds each training session, as long as it is pain-free. If you hit a stopping point where pain is occurring again, drop the weight back to a pain-free load and then continue to work your way back up again. For anyone who has been following Layne Norton’s comeback, this has been nearly the exact approach he has been taking.

Each individual's optimal squat form varies, as femur and torso lengths play a large role in determining your personal biomechanics. This carries over into the stance you prefer as well. But even if it is optimal, when we continue to accumulate volume over and over in the same motion, there is a likelihood of an overuse injury occurring, and stance changes for either a short-term or long-term solution can be appropriate. Very similar to the general rule for variation changes, with a change in stance, if the issue is occurring at the knee, a wider, more hip-dominant stance will most likely be less aggravating to the injury. Conversely, if the pain is at the hip, a narrower and more knee-dominant stance will help with avoiding pain. If this change is short-term or long-term will be highly dependent on the severity of the issue. If you have a chronic issue that never seems to subside or that continually relapses, a permanent switch to may be in your best interest. If it is a first-time occurrence, though, and the injury is easily treatable, a short-term change is probably all that is needed. 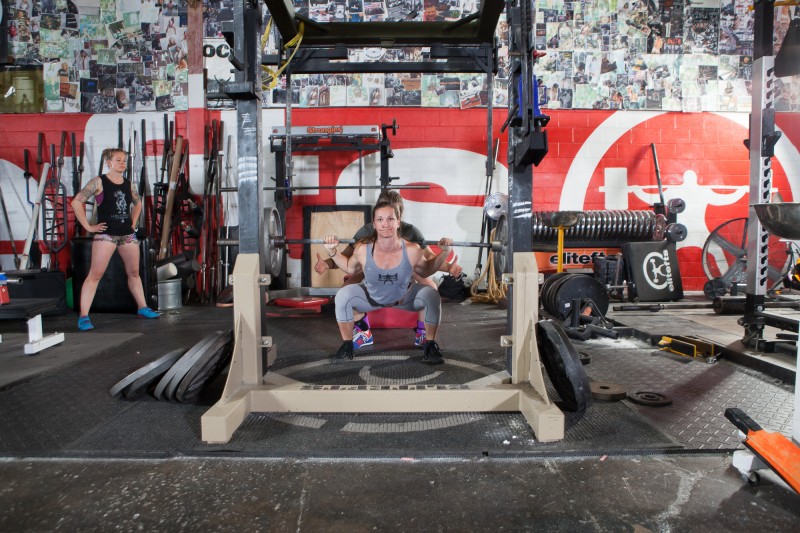 The type of equipment you choose can help alleviate a lot of the issues you experience. First and foremost, if you are experiencing any knee pain yet still do not own a pair of knee sleeves, I would highly recommend investing in a quality pair. The compression, aid, and blood flow benefits of knee sleeves could solve many issues right away. The same goes for a good lifting belt. If back pain has been halting your progress and you do not own 10-millimeter or 13-millimeter non-tapered leather belt, that is another investment that I highly recommend.

For a less obvious fix, shoes can play a role very similar to a stance change. In a broad generalization, people who naturally squat fairly wide usually prefer a flatter soled shoe, while those who squat narrow gravitate towards a higher heel lift. That does not hold true for all, as again, it comes back largely to each person’s individual biomechanics and preferences. When it comes to either knee or hip pain though, a short-term or long-term switch can help with the recovery process. If knee pain is present, making a switch to a lower heel or flat sole can help with allowing you to squat with a more vertical tibia angle. It is very common for someone with patellar tendonitis to see a positive change in their recovery when switching from a high-heeled Nike Romaleo to an Adidas Powerlift or flat-soled shoe. The opposite holds true for a hip issue, in that switching to a higher heel shoe can provide similar benefits by now forcing you into a more knee-dominant squat position.

Now taking this information and applying it, we can put together a list of exercises and variations that can help create an alternative squat training program while recovering from an injury. The closer we can stay to our competition squat the better—as specificity is vital—but we also must do whatever is needed to train in a pain-free range of motion.

Availability of specialty equipment could possibly be a limiting factor based on where you train, so that will need to be taken into consideration. Many specialty bars, such as the SS Yoke Bar and buffalo bar, were specifically created for being able to train around injuries, or limit overuse and prevent future problems from arising. They are great tools to implement if they are available.

You can get creative with these as well. For example, if you want to maintain adequate volume and can low bar squat to just above parallel pain-free, but only for low volume and low frequency, a general example of how to program around that is to incorporate the “just above parallel” low bar squats for three sets of three to maintain some specificity and competition lift practice. To attain the rest of the volume needs, though, choose other variations to follow up with that you can tolerate high volumes and frequencies with.

The other point I want to emphasize, for those who have not tried it, is the benefit of blood flow restriction training (BFR). It is becoming more common practice to incorporate BFR in rehab programs for athletes, as it is a great way to still have a somewhat similar hypertrophy and strength effect while drastically limiting the weight that is needed to perform the exercise. I have used this in my own training to help limit atrophy during times of injury, and it has worked with great success. 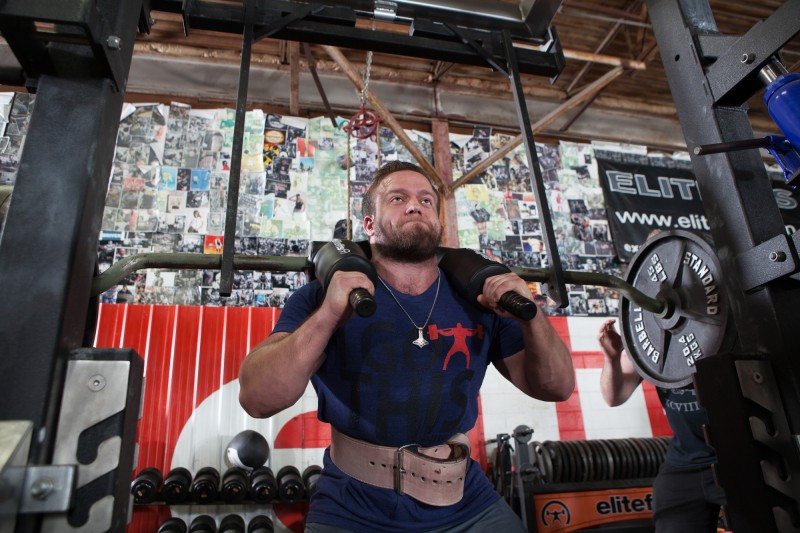 Below is a list of the four main injuries that affect a squat in knee, hip, back, and shoulder issues, and the recommended variations, regressions, and modifications that can be made to work around these injuries and continue your squat training.

Taking this information, it’s now time to formulate a plan for yourself in creating an alternative squat training program to work around your overuse injuries and limitations. Everyone is different and the best option is not the same for everyone. So find what works for you, is pain-free, and allows you to limit atrophy and continue skill practice, and then let yourself recover so once again you can be setting PRs on the platform.

Steve DeNovi is a Personal Trainer, Powerlifter, and Strength Coach from Springfield, MO specializing in strength athletics and post-physical therapy rehabilitation. For further questions, you can contact him at sdenovi@gmail.com and visit his blog at painfreepowerlifting.wordpress.com.