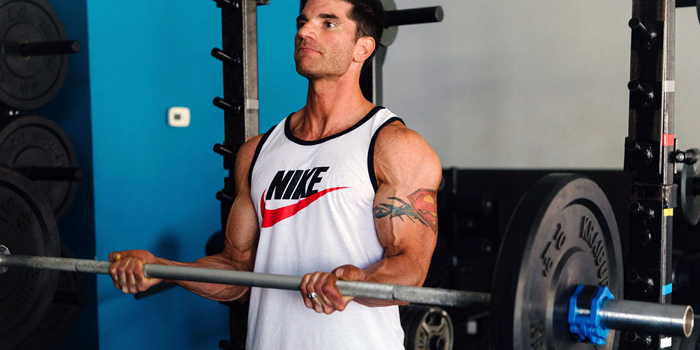 For the better part of 15 years, I’ve spent a huge portion of my day training general population clients with goals that include some combination of losing body fat and adding muscle. I primarily program 30-minute training sessions (warm-ups and cool-downs done separately) for most of my clients. Understand, a typical client falls into the “busy professional” category, where their workouts are scheduled in the gaps between conference calls, long commutes, and some semblance of a social life. The focus is always on the most “bang-for-your-buck” training, and everything is kept rather dense, with rest periods usually not exceeding 60 seconds and lots of supersets and tri-sets of big movements. Here are some examples:

A3. Metabolic or Core Movement

And given the limited amount of time we have to get things done, one of the body parts that can often get put on the back burner is arms. After all, for the average non-bodybuilder, there’s usually a solid amount of stimulation of the biceps and triceps with presses, rows, and pullup/pulldown variations. For many beginner- and intermediate-level clients, they need to get some traction with the big stuff before spending lots of time on direct arm work.

But, one of the keys to gaining compliance is to know how to mix what somebody needs with what they want, and I can generously say that about 95 percent of women and 99.9999997 percent of men want better arms and want to do some direct work because of the way it makes them feel. And being somebody who loves arm training, it’s difficult to deprive my clients of a solid arm pump when their workout wraps up.

One of the finisher techniques that I’ve come up with over the years is my personal favorite and something that many of my clients have a love/hate relationship with: Countdown Sets.

The concept is relatively simple. Start with a weight you can do a good 15 reps with, and err on the side of caution the first time you do it. If you overshoot your weight, things will get ugly (and unproductive) extremely quickly, and having to make a big weight drop midway through tends to make the whole thing go to hell. You’ll then do the following sequence:

You may notice that the above video is four minutes long, which should give you an idea of roughly how long one set will take you to complete.

Other Movements to Use Countdown Sets For

I originally used Countdown Sets exclusively for biceps, sticking with a barbell curl or EZ bar curl. Dumbbell curls always seem to get too sloppy from that much volume. Other than arm curls, there are multiple movements you can use Countdown Sets for. Here are some of my favorites:

For the most part, stick with single-joint movements and/or machine movements. Avoid things like barbell squats and bench presses where you run the risk of getting stuck under the weight. The movements I listed allow for the use of partial reps while limiting any risk of injury and allowing you to focus on pushing through the lactic acid and squeezing the target muscle throughout.

When to Use Countdown Sets

Countdown sets can be used as the icing on the cake of a body-part-specific workout (leg extensions at the end of a leg day), or as a way to get extra volume on a single body part when time is limited (extra biceps, triceps or calves).

Do not do more than one countdown set per movement. It works best to limit it to just a single set with one body part at the end of a workout. I’ve tried doing two bodyparts, biceps and triceps for example, and have found that the first one takes so much out of you that the second one is either done very half-heartedly or suffers from an extreme performance drop-off.