How Stuff Works: The Belt

Introduction: How We Think Stuff Works and How Stuff Really Works (Or Doesn’t)

From now into the next few months I am going to address personal training equipment in this column. The provisory list is:

That covers the whole year and possibly longer if readers remind me of any other item relevant to them that I may have overlooked.

The objective, as always, is to offer the best possible evidence for the subject and the best possible information for decision-making. In other words, it is about how you can use science and, when science is silent, any other evidence, to make an informed decision concerning your choices.

If you are reading this, either you train/enjoy strength training or you like/manufacture personal equipment. In either case, I want to help you. As always, I am committed to causing as much damage as I can to shallow thinking and shortcuts to critical-thinking. Concerning equipment, the first thing I wish to attack is the phrase “everybody knows” (alternatively, “it is known”). “Everybody knows” means “nobody knows, but we do it anyway”, “I heard it once and I’m sure it must be right” or, finally and my favorite, “it makes intuitive sense to me”.

For each item, I’ll start with a chart summarizing relevant features and a few images for the sake of readers who never saw the equipment. 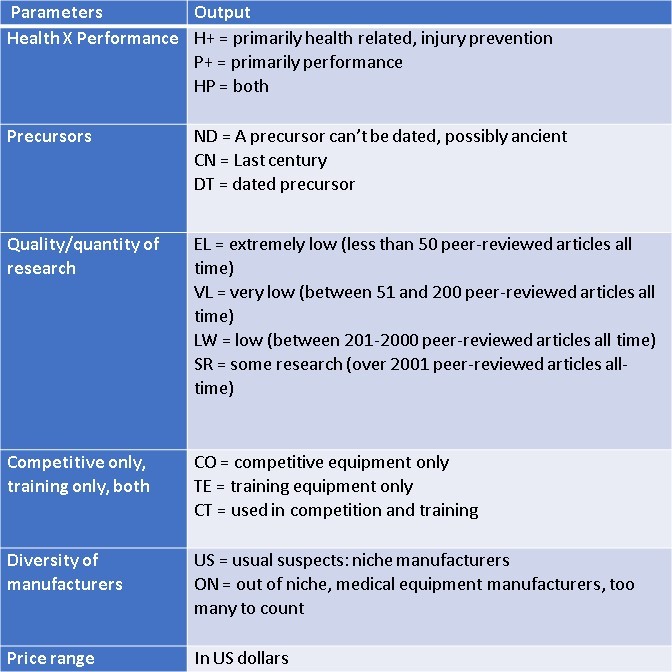 If the equipment is a competition item in one or more sports, the rule specifications for the item will be used. I will use the International Weightlifting Federation, the International Powerlifting Federation,  and American Strongman as standards. No other sport uses competitive strength gear except Crossfit, which doesn’t specify anything in their “Crossfit Games” rulebook.

Following that, I will show you “the state of the art” (what research there is and what it suggests) and final takeaways. You may or may not be surprised about how little research there is. Applied research and technology production is a result of a complex interplay of factors but it is frequently simplified with the expression “science push and market pull”. In the case of this series of articles, neither the science push or the market pull are strong: these equipment items belong in small, niche markets and the questions they raise are not associated with any burning scientific issue. There is still decent studies and fascinating things to learn about them.

Basics About the Belt

These are powerlifting belts: they follow rulebook competition specifications (see below). 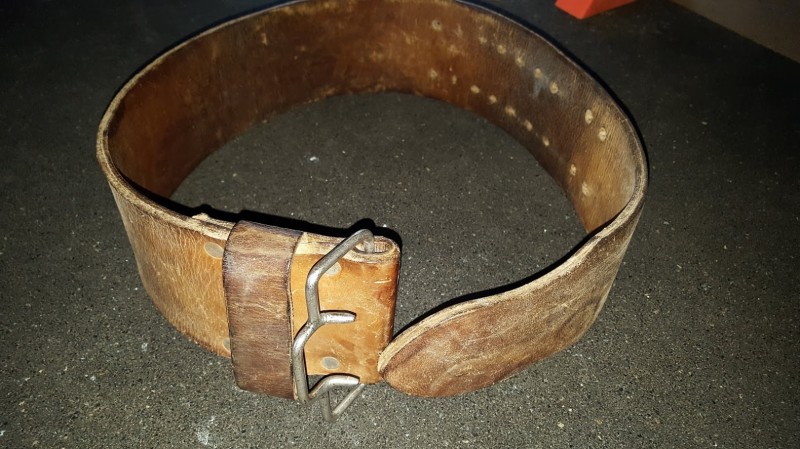 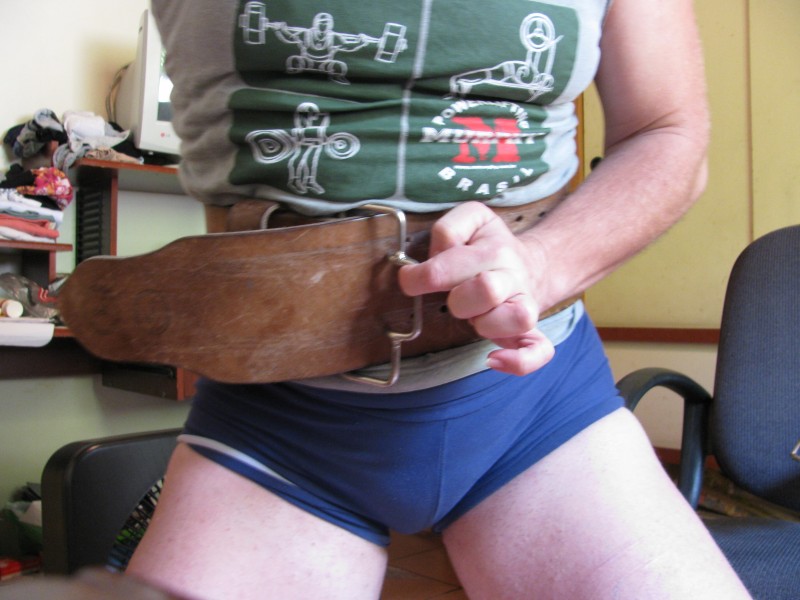 It is rigorously on specs:

Commercial belts come usually either as 10mm or 13mm thick and 4 inches or 10cm wide, according to the first International Powerlifting Federation rules, adopted by most of the others. They can be custom-made straighter and thinner and still be within specs.

Here are some belts that elitefts carries.

A review of the Eleiko Olympic weightlifting belt (Eleiko is a Swedish company, considered the gold standard in equipment manufacture):

The following review shows the diversity of options for Olympic Weightlifting belts:

According to the weightlifting rulebook, “A weightlifting belt may be worn. If used, it must be worn on the outside of the costume. The maximum width of the belt is twelve (12) cm.” (rulebook). Additionally, they suggest “A weightlifting belt is typically 10cm wide for back support but tapers off in the front. Some weightlifting belts may also have extra padding in the back. Leather and suede options are popular, although some use a Velcro-style belt because of its extra mobility. Belts are usually sold with a thickness of 10mm or 13mm. While the latter offers sturdier support, its depth can prove uncomfortable.

The International Powerlifting Federation is more detailed in its rules concerning belt and other equipment, including width, thickness, type of material, fastening system, etc. 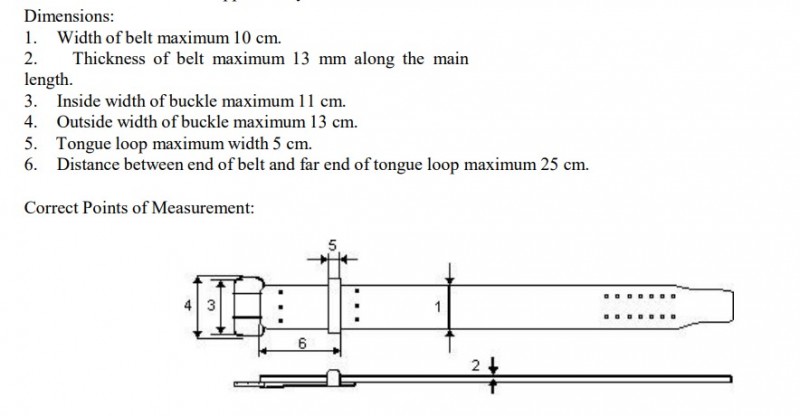 There are dozens of international powerlifting sanctioning bodies and powerlifting is not an Olympic sport. Using the oldest, biggest, most traditional and well-regulated organization makes a reviewer’s work easier.

The precursors of the lifting belt are unknown. The documents we have are USPTO patents and date back to the beginning of the XXth century. 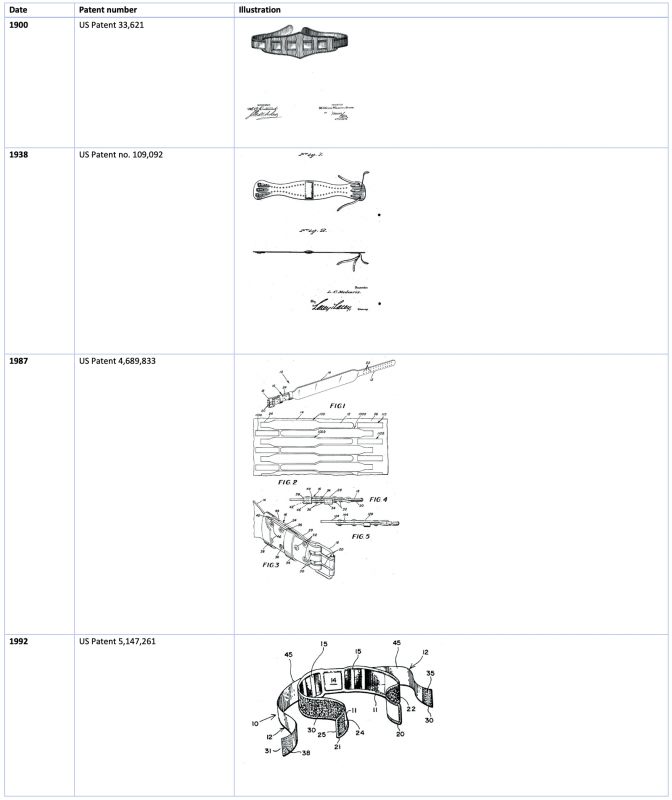 The State of the Art

There is little research on the effect of the lifting belt on athletic lifting (as opposed to lifting heavy objects at work). It doesn’t seem to be a topic of concern now and recent articles are mostly reviews of the studies carried out in the 1980s and 1990s. 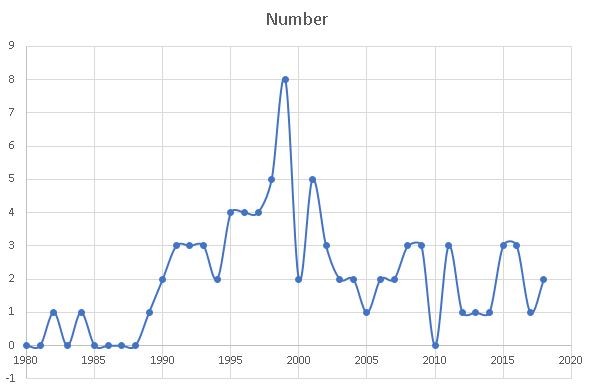 Number of articles obtained from Pubmed with the words “lifting” and “belt” in the title by year.

Most of the research on belts and back supports is not concerned with athletic lifting but rather injury prevention at work and lower back pain relief. That body of research is not methodologically standardized, the results are conflictive and overall inconclusive (Renfro & Ebben 2006).

The basic assumption about the effect of the lifting belt during athletic lifts is that it increases intra-abdominal pressure (IAP) beyond what can be naturally achieved by bracing (Maeo et al. 2013). This increased IAP has a direct effect on electromyography activity of several back, abdominal and leg muscles and it is assumed to produce greater spinal stability (Church et al. 2016).

Some of the relevant electromyography studies on weight-belt effect were done by Jeffrely Lander’s group (Lander et al 1990, Lander et al 1992). In both studies, ground reaction forces, intra-abdominal pressure (IAP), and EMG results for the rectus abdominus (RA), external oblique (EO), and erector spinae (ES) muscles were collected. In the first study, most differences were observed during the 90% 1RM condition. Maximum IAP values were always greater for the weight-belt conditions. Similar results were observed for the mean IAP. The integrated EMG activity of the muscles and adjusted mean values for back compressive force and back muscle force followed a similar but opposite pattern, with “no belt” being the greatest. ES mEMG/(L5/S1) values for “heavy belt” (18.1%) were the least, followed by “light belt” (20.01%) and “no belt” (22.3%). In the second study, subjects’ indicators were recorded up to their eight-repetition maximum effort. In the second study, two experimental groups were compared on the basis of the same parameters: the “WB” (with belt) group and the “WOB” group (without belt). Vastus lateralis (VL) and bicep femoris (BF) electromyography activity was also measured. WB IAP values were consistently greater than WOB values by 25-40%. IAP increased by approximately 11.5% from the first to the last repetition. No differences were observed for ES and EO mEMG for belt usage, but values increased by up to 20% across repetitions. Several differences were observed between WB and WOB for the VL and BF mEMG, with WB values being significantly greater. Lander’s group studies also measured greater squat velocity with belt assistance. These results are still not consistently reproduced (Björk 2017, Church et al. 2016).

Although it is still assumed that IAP is an important factor for the subjectively reported performance increase (never actually directly measured, mostly for methodological reasons) conferred by the belt, Kingma and collaborators confronted this assumption (Kingma et al. 2006). Their study was, methodologically speaking, the most comprehensive: more lifts and parameters were studied. Their hypothesis was that another potential effect of a tight lifting belt was that it could directly generate a moment[1] on the trunk, which could assist the back muscles without causing additional compression forces. The conclusion was that wearing a tight and stiff back belt while inhaling before lifting reduces spine loading at about 10%, but this moment is generated by the belt rather than by the IAP.

Finally, there is another indirect evidence of the beneficial and trunk stabilizer/protective action of the belt: its effect on spinal shrinkage. Spinal shrinkage is the reversible loss of height that happens during loading in lifting exercises due to extrusion of water through the disc wall when the applied compressive force exceeds the imbibition pressure of the nucleus pulposus complex and the osmotic gradient across the disc membranes. Bourne and Reilly (1991) determined that the use of the belt resulted in less shrinkage and also less discomfort.

A recent study conducted with an experimental group suffering from low back pain using a belt (or lower back orthosis) tested the hypothesis that the belt could have a secondary injury preventive effect, even with insufficient evidence supporting a primary preventive one (Shahvarpour et al 2018). The authors concluded that the lumbar belt reduced pain, fear of pain and catastrophizing in subjects with lower back pain. Although this study was conducted among a non-athletic population, kinesiophobia (the fear of movement-related pain or injury) is a well-studied phenomenon (Picavet et al 2002, Lundberg et al 2006) and it has a high incidence among competitive athletes (Lundberg et al. 2009, Flanigan et al 2013 and Houston et al. 2013).

We could speculate that the belt may be also, but not only, a mentally protective device for lifters, many of which already suffered some sport-related lower-back, hip or lower-limb injury. The confidence gained by this potential mental protective effect can produce both injury-preventive and performance benefits.

[1] A moment, or moment force is a measure of its tendency to cause a body to rotate about a specific point or axis.

The idea that the belt could have a psychological effect is not new and was discarded, together with any other advantage, in previous studies (Lavender & Kenvery 1995). The authors did not test the “kinesiophobia preventive” effect, though.

Can the Systematic Use of a Belt Cause Muscle Weakness?

From “never use a belt” to “always use a belt”, experienced lifters tend to favor “use a belt sometimes”. When is “sometimes” and why only “sometimes”? For “raw” (unassisted by supportive shirts, suits and sometimes knee wraps) lifters, “sometimes” is usually “only for the heavy lifts”. Heavy is a subjective term and from experience, it is safe to assume that people mean something over 85% intensity (85% of one maximal effort lift).

It is common to hear lifters justify this by saying that using belts at lighter weights “weakens the back” (or weakens the lift).

MORE: WATCH: Why Do I Always Wear a Belt?

There is a point in the subjective perception these lifters claim: without the belt, trunk stabilization is achieved through what is known as “bracing”, or the co-contraction of abdominal muscles (Maeo et al. 2013). As shown in the electromyographical studies concerning activity in spinal erector and abdominal muscles, the belt "saves" bracing effort and produces a stabilization and spinal support. Since bracing is a trainable action (Coenen et al 2017) and bracing for heavy lifting requires a lot of training, it is possible that the systematic use of the belt at lighter weights creates a detraining effect.

Also, and this is merely speculative, once a stiff belt is tightly adjusted, the actions performed by the lifter involve expanding certain abdominal muscles against the belt resistance (opposite to the bracing actions). This may further cause bracing skill loss.

Considering that most of the research about the effects of the lifting belt leave us with more questions than answers for the reasons reviewed here, I offer a table of good and bad ideas concerning the lifting belt: 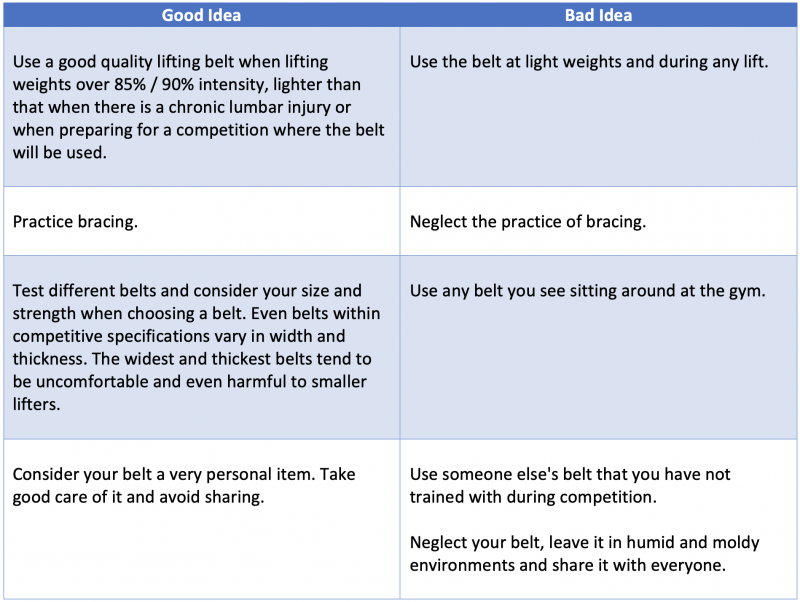