How to Effectively Train Core Strength 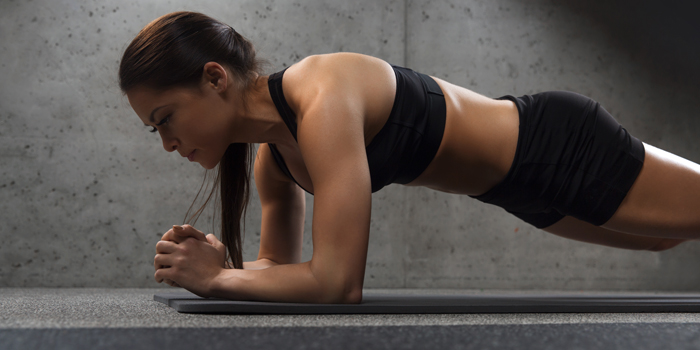 I find myself somewhere in the middle of this spectrum, taking from both sides because both have valid reasoning. My idea of developing core strength is by both locally and globally training all the musculature that is attached to the hips. The movements this musculature performs includes hip extension/flexion, hip abduction/adduction, lateral flexion, and anti-rotation.

In addition to the abdominals and hips, another muscle I find to be an integral part of well-rounded core strength is the latissimus dorsi, or the lats.

First off, one of the origin points of the lats is the iliac crest and sacrum (hips), so when your lats are tight it can easily pull you into extension and cause an anterior pelvic tilt. This will lead to poor transfer of energy throughout the body’s kinetic chain and cause potential compensation patterns.

Secondly, the lats provide stabilization for all movements that are performed with the upper extremities; they are the glutes of the upper body.

Lastly, the lats are tied to the musculature of the hip through a myofascial sling known as the posterior oblique sling. Think about when you are running — when your right arm swings back, so does your left leg.

Each myofascial sling is responsible for certain movements patterns in each plane of motion (POM). That is why developing your athletes’ myofascial slings is so important; to be prepared for the unpredictable nature of sports, the ability to stabilize and transfer energy in all planes of motion is essential (1)!

When there is a weak link in a sling, this leads to either an energy leakage within the kinetic chain or a possible compensation pattern that could lead to injury down the road. This is why when we are training our athletes to improve their core strength, we shouldn’t only look at muscle individually, but at each sling as a whole. (2)

The most common prescription to address a lack of core strength from strength and conditioning coaches is to have the athletes perform plank variations. This is a very effective option only for athletes with a low training age (middle school, high school, and unfortunately, some college athletes). It teaches them how to fire the musculature of their abdominals and hips, so they can properly brace and maintain an isometric position.

Initially, when planks are programmed, the athletes can only maintain proper position and stabilize their trunk for minimal amounts of time. Once the athlete can hold proper position for short durations (10 to 20 seconds), progressive overload must take place for further adaptation to occur. Typically to provide an overloading stimulus for the plank, coaches either increase the duration of the movement or by adding load to the movement (by placing a plate on the back of the athlete).

Although both of these are logical options when progressively overloading the plank, there comes a point in when the musculature of the abdominals and hips are no longer the limiting factor.

Something I often hear in the weight room from my athletes is, “This burns my shoulders more than anything else, and I don’t even feel it in my core.”

At this point in our plank progression, if their ability to hold themselves in a proper position is limited by their shoulder girdle endurance, are we even achieving our goal of stressing the athletes’ core strength?

If this is an issue for athletes, you’ve got two possible solutions for progressively overloading the plank: use feet elevated variations or add manual resistance. Elevating your feet increases the intensity of the plank because it changes your body’s center of mass from being centered in your lower body to being centered in your upper body.

It may sound like this variation will be more taxing for your upper body because that’s where your center of mass is now located. However, this change will cause your body to engage and increase motor unit recruitment from the musculature of the abdominals and hips to create balance within your body. This is due to the attempt to shift your center of mass towards your lower body and hips.

Intensity can also be increased by having a training partner apply manual resistance to provide progressive overload. Manual resistance is effective for all levels of athletes because the amount of force applied is dependent upon each individual athlete’s strength level. It also allows for strength to be trained both eccentrically and isometrically (both in advantageous and disadvantageous positions).

Gaining strength in these portions of the movements will allow the athlete to take advantage of the stretch-shortening cycle, making force absorption and production more efficient. The biggest benefit, however, is that it allows the core to actually be trained for strength rather than just endurance like most other plank variations. Due to the high levels of loading that can be applied (high intensity), minimal volume is needed for adequate stress to be applied. This allows for our core strength training to be focused more on quality rather than quantity, which is a rarity.

Below I will go over all the possible variations of the feet elevated planks and five progressions for each variation. Not only do these variations develop core strength globally, but they also isolate specific muscle groups that are often overlooked in typical strength and conditioning programs. The key to avoiding injury in team sports is removing weak links in the body, and as the saying goes — the body is only as strong as its weakest link. These exercises will remove those weak links from your athletes.

I have had great success implementing these exercises and progressions with my athletes for both injury prevention and increased athletic performance. This article gives you the tools to keep your core strength training both challenging and exciting for your athletes. Enjoy!

Once all the progressions of the supine and prone plank can be performed proficiently, to add variety, they can be performed single leg, single arm, or both of those variations can be done simultaneously. This will add an anti-rotation aspect to the movement, which is necessary for field sport athletes.

Regan Quaal is a strength and conditioning coach at Belmont University. After working with Cal Dietz at the University of Minnesota this past summer, he's become more interested in maximizing athlete potential in the weight room while minimizing negative side effects to sports performance.