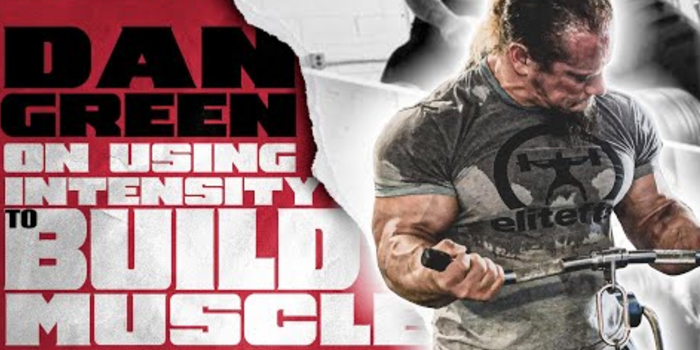 “How do you become muscular in powerlifting versus bodybuilding?”

Dan Green is a strength athlete who’s excelled in both sports, so if anyone has the answer to this question, it’s definitely him.

Turns out, this is a question that can be answered in one word: intensity.

Intensity is usually used to talk about a percent of max, but for anyone who’s lifted weights, intensity might be when lactic acid begins to build up and they’re getting out of breath, and feeling crushed by the weights.

“Fatigue is a big part of intensity to me. Any bodybuilder thinks about how ‘intensely do you train?’”

Dorian Yates’ training videos inspire Dan and get him thinking about heavy compound lifting as part of Dorian’s style. Dorian trained to the point where he’s really taxing himself.

“I like that because I think that means I’m using powerlifting lifts in a bodybuilding style in the way that one of the most effective bodybuilders did his training.”

It’s a good way to build strength in weaker areas, particularly when you’re forced to stabilize in an awkward position. As the discomfort and perceived intensity build up, try to concentrate and push through the lift with the best form and technique to the best of your ability.

While it may be easier to have that particular lift be sloppy, really pushing through to do the highest quality movement until the end is what will help you build muscles.