The Role of Mental Toughness in Sport Performance

“Have the courage to choose the future rather than the past.” — Dr. Salvatore Maddi

“You must unlearn what you have learned.”— Yoda

Introduction: Another Brick in the Wall

A while ago, I wrote a series of articles about motivation. My goal was to offer an evidence-based introduction to the concepts involved in motivation. The terms that expressed these concepts have been misinterpreted, misused, and abused. They have been presented with a judgmental, moralistic, and emotional tone in the fitness industry and in pop-psychology publishing outlets. This is harmful. I decided to finish the series with what I consider to be the remaining badly misused concepts. The previous one was discipline, and now, the worst of all: mental toughness.

So, let’s see examples of the harmful uses. This list is a perfect illustration: of the 17 items, only four are not wrong. It has all of the elements that I hope to show you have nothing to do with the scientific concepts involved in mental toughness or hardiness:

If you are into or are familiar with one of the strength sports or martial arts, you've certainly heard versions of these or even worse:

In his review of mental toughness, Crust (2008) identified a historical landmark that turned a loosely employed term into a scientific concept. That would be the work of Jones and collaborators (2002, 2007).

Having the natural or developed psychological edge that enables you to, generally, cope better than your opponents with the many demands (competition, training, lifestyle) that sport places on a performer and, specifically, be more consistent and better than your opponents in remaining determined, focused, confident, and in control under pressure.

The authors listed 39 attributes for mental toughness, divided into four categories: attitude/mindset, training, competition, and post-competition. When you read them now, 10 years later, it is unavoidable to see them as a long list of overlapping and mutually determining concepts (motivation, determination, ability to push oneself, regulating performance, self-efficacy, goal-oriented action, to name a few).

But as early as 2008, some researchers were suggesting, more on the line of the “hardiness” studies, that not only was mental toughness only a developed trait but also it had to be maintained or it would be lost (Connaughton et al 2008). Worse: it would require a lot of work as well as sophisticated skill learning and social network support to keep it. 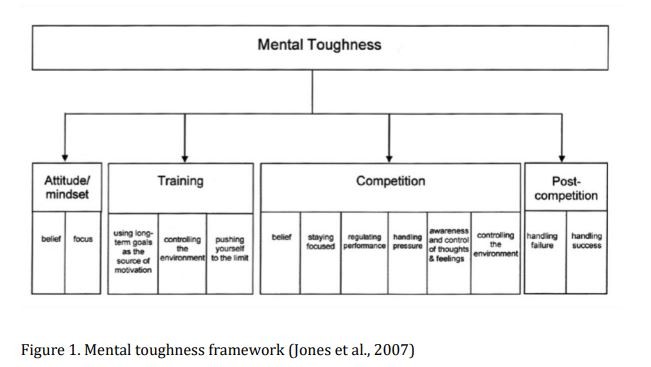 Crust also pointed out that the relationship between mental toughness and success is misleading in these early authors’ work. Indeed, we have a logical problem when the goal of a research line is to identify “pivotal factors” or a core determinant of success, but only successful subjects are studied. To be fair, the researchers involved in mental toughness studies were sport psychology scholars and were interested in understanding athletic achievement (winning the game).

The problem is that more or less at the same time, and according to the broad allegiance to positive psychology, other researchers were studying grit among students or the military, the Big Five personality traits among businessmen, and hardiness, generally related to stress management but focused on corporate and military accomplishments (Maddi 2006). 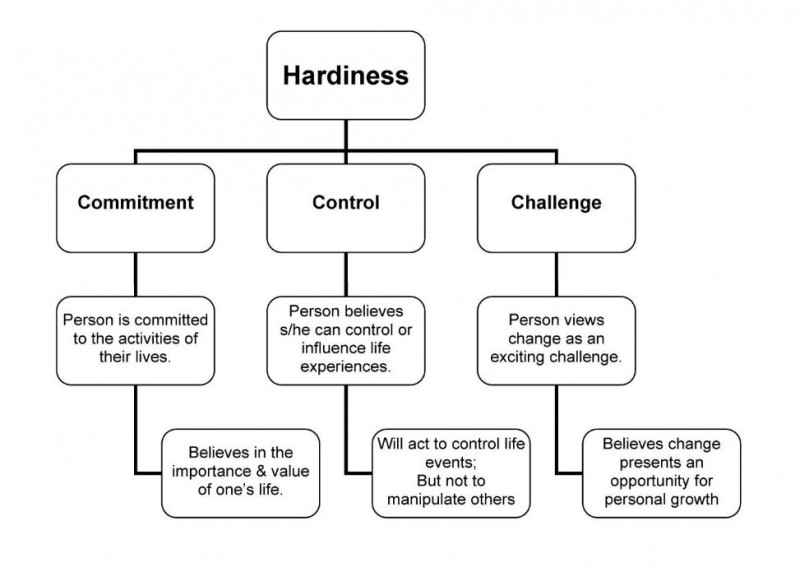 What do all of these approaches have in common? To start with, they are about people. They all claim allegiance to positive psychology. They all study the correlation between certain mental or behavioral patterns and success. They all evolved into several metrics and quantitative measuring tools. In science, that’s important: phenomena must be measured, and hypotheses must be checked. Also, if the model is scientifically acceptable and has an immediate application, it is necessary to have the means to monitor interventions or to select individuals.

To understand where they differ and where they may be addressing different phenomena, the best tool is the direct measurement of genetic and physiological determinants (nature), as well as of education, upbringing, and social environment (nurture). Horsburgh and collaborators (2009) conducted a behavioral genetic study using 219 pairs of adult monozygotic and dizygotic twins from across North America. They applied a Big Five personality test and the 48-item mental toughness (MT48) questionnaire (there is no validated mental toughness test). The researchers wanted to test the relationship between the Big Five and mental toughness components according to a revised concept proposed by the creators of the MT48 (Clough et al. 2001).

Take the test here or here. 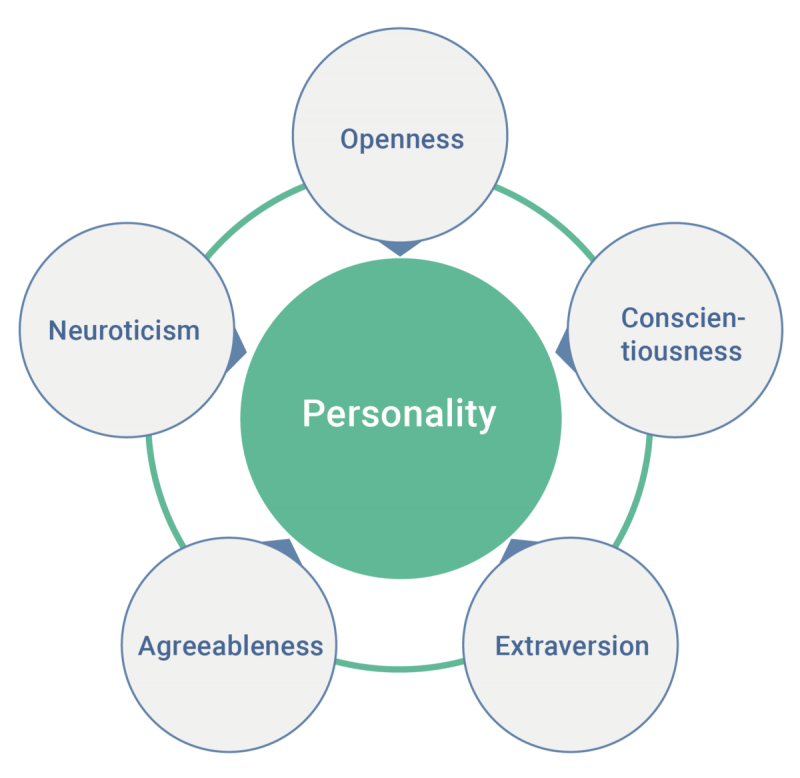 Horsburgh and collaborators (2009) expected a positive correlation between mental toughness and extraversion, openness to experience, agreeableness, and conscientiousness. They also expected that negative correlations would be found between all mental toughness variables and neuroticism. Their experiment confirmed the hypothesis. It also confirmed that the measured personality traits are attributable to common genetic and nonshared environmental factors.

Mental toughness, the only one of all of the “discipline” — or “determination” — related concepts developed and predominantly applied to athletes, resembles but is a little different from grit, hardiness, and a combination of the Big Five personality traits.

The big question is: what exactly are we talking about when we observe a positive correlation between success (in whatever way it is measured or perceived) and a certain behavior that more or less resembles the “ideas” of persistence, commitment, and all of the string of other “ideas” they drag along?

Maybe we are not talking about the same things – not genetically, not physiologically, and not behaviorally.

Crust and Swann (2011) compared two measures of mental toughness in a group of 110 male club and college athletes. They found that:

Correlations between similar mental toughness subscales were found to be positive and significant but somewhat lower than expected (r = .49 to .62). Results suggest instrument subscales with similar labels are not measuring the same components of mental toughness.

It appears that even in comparing models that attempt to define and measure attributes of the same “thing” (mental toughness), in the same population (high-performance team sports players), the authors are not talking about the same components. If this is true, imagine the discrepancies if we compare the “thing” in high achievers from completely different fields (students, accomplished scholars, physicians, artist, military servicemen, businessmen, etc).

So, maybe we are talking about several layers of traits related to a central “thing” after all. That “thing” seems to be resilience. Liu and collaborators (2017) reviewed the literature on resilience and identified ambiguity and ambivalence (relevant research that employs other terminologies for phenomena related to manifesting resilience). They proposed a model according to which individuals have: 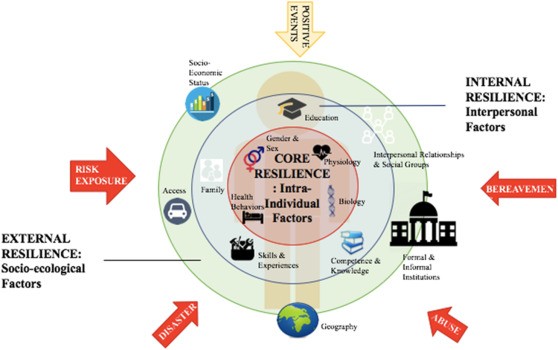 This approach makes choosing one or another metric easier:

Several problems are solved via integrative approaches. The one that matters the most to me in this series is to invalidate moral judgment.

We can use grit or Big Five metrics, identify highly gritty individuals, and not focus on their interpersonal skills. We can use mental toughness metrics and do the opposite. Or we can use another combination of quantitative tools. It is all contextual.

Evidently, inter-personal skills are important in team sports. They are also important in corporate and institutional teamwork.

Conscientiousness has shown to be the most relevant determinant of academic success among the Big Five. This is understandable considering that academic performance may involve fewer interpersonal skills than any teamwork does.

Finally, not even the best genetic makeup beats a disastrous family and social environment, with rare exceptions.

Putting It All Together

Gucciardi and collaborators conducted a research study with Australian football players and did not employ the quantitative tools developed by Duckworth and Quinn for grit (2009) or those developed to measure the Big Five personality traits. The authors concluded:

Maybe that’s what is needed to evaluate all of the models and tools available, indicate where they are addressing the same or similar phenomena, and why and how to interpret these advances. We need to develop case-specific assessment tools. In this way, all other quantitative tools may complement the project without adding noise and confusion.

Gucciardi’s group, not concerned with any other model or method, offered a direct indication concerning conceptual correlations in the context of the study they carried out.

What we can infer from research up to now:

For our Intents and Purposes

Most people who come to our site and those who follow this column are either strength and conditioning coaches, people who seriously enjoy strength training, athletes and “interested individuals” (people who are not into sports or serious training yet want support for their informed decisions).

Although I don’t have direct access to all of my readers, I believe that the majority fall into physical activity, including athletic and occupational classes characterized by individual goalsetting and course-of-action choice. This includes:

All of these people can take advantage of mental toughness, grit, the Big Five, hardiness, and resilience models and metrics. Each one will provide one type of insight into what are the strengths, weaknesses, and untapped potential of a given person, whether it is his or her client, athlete, or student, or even himself or herself.

That is a useful and constructive way of looking at oneself, understanding the nature of the choices ahead and muting the noise from the fitness and pop-psychology outlets.

It’s a form of freedom combined with education, and that can never be bad.