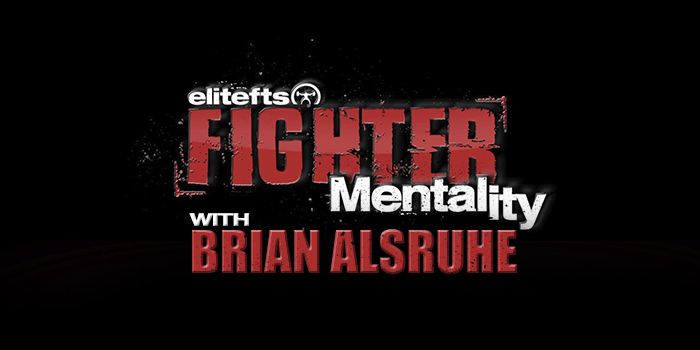 Brian Alsruhe’s first memories are violent ones. He remembers getting jumped by one of his sister’s friends. He remembers punching a kid in the face with his metal Charlie Brown lunch box.

He doesn’t want to call himself angry. He’s intense. In his videos, Brian is full of energy. He was like that as a child. He’s 40 now and has the same energy he had then.

“My mom would send me on a job with my dad because he was a construction worker. My dad would make me dig holes to fill the holes back in or give me a hammer and a handful of nails and ask me to put as many nails in as possible...”

All of these things were done to get energy out of him.

Brian didn’t grow up in a good place. He didn’t grow up with much money. His parents worked a lot, often leaving him home alone with his older siblings.

He remembers his neighbor, who beat his wife all the time. His neighbor tried to steal axes out of his father’s truck. It was bad, and there was no getting out of this place.

“The next vivid memory that I have is him trying to break through the back door of our house, to come to get my sisters and I, who are alone, and we need to run out the back of the house and get the police and everything. I decided then I was not a victim... I decided at a very young age that I was going to become strong.”

Growing up in the ‘80s, Brian found strength in Arnold Schwarzenegger, Sylvester Stallone, and He-Man. The one thing these people (and cartoon character) had was muscles. So if Brian were to become strong, he’d need muscles. That brought him to weight lifting... and fighting.

He took intense karate lessons that he says were more like kickboxing. “We beat each other unmercifully.” The instructors pitted 12-year-olds against 17-year-olds. With the release of Mortal Kombat, fighting was the thing to do.

Another early memory of his is always present in a chipped tooth from somebody kicking him in the head. Thinking it would be disrespectful to his opponent, he bowed and didn’t say a word about it.

It was a different kind of fight school. Yes, it had cool karate moves and other martial arts, but it emphasized the importance of one’s mindset.

“If your mindset was strong enough, your body could literally do anything. You could shoot fireballs at that time, right? It was believable. There was no Internet, you believed it.”

People look at that mentality as freakish and unbelievable, but that’s how Brian grew up. It’s how he began to form his own mindset.

He went from karate to kickboxing to jiu-jitsu to MMA, all the way to owning his own karate school in college. There, he spent more time training and teaching than lifting weights.

College graduation came and went. Brian had no interest in his degrees let alone doing anything with them. So he focused on building his body instead of his resume.

“Fighting was the biggest part of my life,” so his training focused on that: performance. Therefore, his training looked different than many other strength sports participants. He taught himself to train using a handful of reputable online resources, including elitefts.com.

Though his training was going well around this time, Brian’s life lacked purpose. Then, a “strange thing happened,” and he got involved in counter-terrorism work. He traveled and was overseas a lot. He lifted a lot and became an instructor... until the health problems struck.

After multiple tests, Brian received a call from a doctor who informed him he had a brain tumor. “I wasn’t like a ‘you’re-going-to-die’ brain tumor; definitely a ‘you-should-stop-getting-hit-in-the-head’ tumor,” he says. So he hung up his MMA belt and continued jiu-jitsu and lifting, both of which lasted through the remainder of his counter-terrorism career.

Brian got his start in strongman after the death of a friend and opened up his gym, NEVERsate.

“Strongman has led me to so many beautiful places in life. I’m still here because of strongman.”

He’s met so many amazing people through strongman and has found incredible opportunities as well.

Still, without his passion for jiu-jitsu, fighting, weight lifting, and the mindset he gave himself as a child, he wouldn’t be where he is now. It was always about challenging himself and being comfortable about being uncomfortable and going the extra mile for yourself, not others who were watching.

If it weren’t for any of these things, Brian would not be the man he is today. But that doesn’t mean his life is perfect.

As he was moving up in the strongman ranks, one day, he became ill. That sickness led to throwing up, which then led to throwing up anywhere from 30 to 50 times a day, every single day for two years in a row, which, of course, led to other health problems.

He’s had five surgeries, and just three months ago, he started getting treatments for his illness. Now, he’s free of that disease but will be dealing with its effects for the next 15 to 20 years of his life.

“I literally could not have made it without the morals and principles I’ve learned through fighting, through lifting, through just choosing the right thing every single time, to just not skip out on sets, not skip out on reps, not skip out on anything, learning how to focus, being comfortable with being uncomfortable, and just being able to look at the next step, the next rep, getting through the next second, the next day, the next hour, whatever you need to get through, that’s the only way you get through anything. You can’t look at anything on the whole. If you think about throwing up 50 times a day, every single day, trust me, you’ll eat a bullet. I almost did. You literally need to look at it as one day at a time, one second at a time, one minute at a time, and that can happen if you build it one rep at a time, one set at a time, one fight at a time, one decision at a time. It bleeds over to other areas of your life, and if you’re not learning that from lifting, then you’re wasting a lot of your time. This is not about building better biceps. It’s not about your deadlift PRs, your squat. Time wins. You’re going to lose. All those things go away. It’s not going to matter. What’s going to matter is what you’re deciding in your head. These small decisions become big decisions, and when you get that call at 2 a.m. in the morning and your life crashes, how you deal with that is exactly how you dealt with your set of 20 reps.”