WATCH: How to Box Squat with the Rackable Cambered Squat Bar 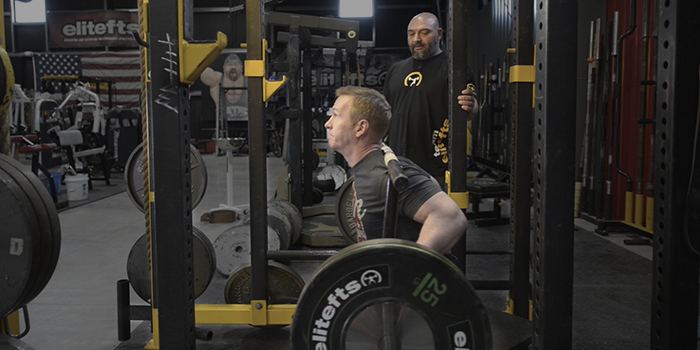 In his previous instructional squat video, Executive Equipment Specialist Nate Harvey explained and demonstrated how to teach and coach the box squat. That article and video focused on using a straight bar for a standard box squat. Today, Harvey moves to a popular and very useful specialty bar variation: box squatting with the rackable cambered squat bar.

RECENT: How to Teach and Coach the Box Squat

This bar is not only easier on the shoulders—something important to athletes and lifters alike—but also enables you to build strength while using less weight. All of the cues that you would use with a standard straight bar still apply, but because of the positioning of the weight, the movement is more difficult, forces you to stabilize more, and doesn't allow you to rock forward off the box to come up. With light weight, a lifter may rock on the box to begin the concentric portion of the movement, but as the weight gets heavier this will throw them forward and make them unable to complete the rep.

In this video, Harvey has a lifter named Matt, who has never squatted with a cambered bar before, work up in sets to heavy singles, and coaches him throughout the process. With a straight bar, Matt can squat in the low to mid 300-pound range. As Harvey has him begin the squat session, he explains that the first few sets include multiple reps to get warmed up, but that they switch to singles very quickly as the weight gets heavier. While Matt warms up, Harvey also gives a word of advice to coaches and says that when using this squat variation with athletes you should always encourage them to push on the bar hard every set and try to move it as quickly as possible. The goal is to activate the muscles as much as you can and get them ready to go for the heavier sets without becoming fatigued.

The rackable cambered squat bar is a 65-pound bar, so Matt begins with the empty bar and progresses through the following sets:

At 205 pounds, Harvey begins to see some swing in the bar, so he has Matt start taking smaller jumps in 20-pound increments rather than full plates. Then as Matt keeps adding weight for additional singles, he begins to get used to the bar and doesn't allow the bar to swing as much. Harvey explains that, although Matt does a great job of not rocking off the box, he does push his hands into the bar, which causes some shaking in his heavier sets. The better method of finding tightness in your upper body, he says, is to tuck your elbows and pull them in, which will lock your upper back in and help build strength in the upper back and core.

Throughout this coaching session, Harvey uses many of the same cues he would with a straight bar box squat, including: