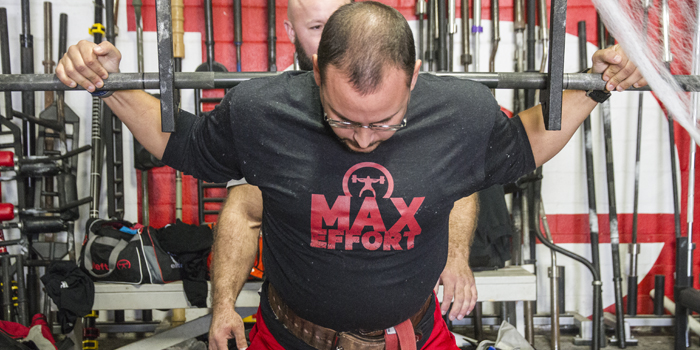 We are all guilty of doing it: we are always looking for the next “best” thing. We read about training and get caught up in new techniques and programs. While that is great, we often forget about the less glamorous but ultimately more important things that keep us moving toward our goals. When you look at all the best lifters, you find that they have seven habits in common. I believe these seven habits lead to continual progress towards getting stronger.

Habit 1: They choose the right exercises.

There are certain exercises that have stood the test of time. They are big compound movements that recruit a lot of different muscles and cover many joints. They stress the body as a whole and allow heavy weights to be used.

These exercises are the competitive lifts from powerlifting and Olympic weightlifting: the squat, bench press, deadlift, clean and jerk, and snatch. All of these exercises have their own derivatives and any of those would be suitable too, depending on your own body shape and physique. Throw in pull-ups, dips, military press, and chest-supported rows and you have the bulk of your training program.

You see, as I mentioned, these exercises allow continual progress. Compare a squat to a biceps curl and you can see that the weight you use for a curl is going to stall after a few weeks if you try and move up to a heavier set of dumbbells each week. With a squat, however, you can add to the bar for long periods of time if you train appropriately.

The best lifters will stick to their programs and exercises for a long period of time. They won’t get impatient and program hop. Program hopping is all too common among inexperienced lifters.

Some internet gurus even try to make this sound like it’s the plan, quoting muscle confusion and advanced periodization schemes. But before the internet, lifters would stick with an exercise until they improved and then would continue to stick with it and make more progress!

I can’t emphasize my point enough — you have to stick with your main exercises for a minimum of eight weeks before even considering changing. The problem with changing exercises is that whenever you do, the initial progress you make is learning or relearning the lift. If you then change exercise again, you haven’t forced the neuromuscular system to improve and adapt (also known as getting stronger).

The nervous system responds well to frequent stimulation and therefore must be trained more than once a week. This goes against all of the body-part bodybuilding programs I’m sure you have seen. The best lifters practice their technique frequently and thus learn how to contract their muscles harder and produce more force.

Whether you lift two or three times a week really depends on the loading protocol, but generally the more frequently you can lift and recover, the better. When training for strength, two weekly sessions of an exercise is the minimum.

Top lifters lift heavy! It should go without saying that to get stronger you need to lift heavy objects. Research of Russian weightlifters and powerlifters found that the majority of their lifts were around the 75-85% of one-rep max mark, with occasional forays into the higher 85% area.

Again, the actual percentage you use depends on the set and rep protocol, but so long as you are around the 80% figure, you will be doing well. Going into the 90% or higher domain is of course doable, but don’t do it too often and don’t be a “one-rep wonder” trying to set a new 1RM every session. Dan John in his book "Easy Strength" talks about training to gradually increase your 80% and sneakily improve your 1RM — a much more achievable plan with less chance of burnout.

You don’t see someone decide to run a marathon and begin their training by running a half marathon. Training is about progressing to a level that challenges you but is achievable at the same time. The best lifters understand this.

It is common for beginners to start too hard. They smash themselves the first session and then the next session they can’t progress or improve. This is one of the big reasons people become demotivated and stop training or—dare I say it—program hop.

You see, when you first start a new exercise, program, set and rep scheme, whatever, it is a new stimulus to the body and it will adapt. Therefore, you don’t need to go 100 miles an hour to start. Just get it done to a decent level, don’t hurt yourself, and turn up next time ready to go a bit harder.

The best lifters will begin light and slowly progress over time.

Successful lifters record their sessions in a training diary. That small act is one of the biggest keys to long-term success. Try asking any serious lifter about his PR’s and he will probably bore you to tears!

I recommend everyone use a training diary to track workouts and highlight personal bests. There are some online that you can purchase that have areas to record one, three, five, and 10 rep maxes for core lifts. At least use a regular old diary so you can search back through to find them.

It’s something so simple and easy, but very few do it. Don’t be one of them. Buy a diary of sorts and track as much as possible. What gets measured gets managed, and it can be used as a motivational tool to see your progress in black and white in front of you. You can also look through and see what has worked and what hasn’t and adapt your training accordingly. You might find exercises that help bring up your lifts and be able to discard ones that you don’t get anything out of. Get a diary!

All top lifters' programs have some sort of progression plan built into them. The most common way to progress is more weight on the bar, but you can also increase volume (sets and/or reps), density, or difficulty of exercise.

All of the previous habits come together to allow constant progress:

So there you have it — seven habits that, if you adopt, will have you smashing through stubborn strength plateaus. Over time, you will learn that it’s developing these habits that gives you results and not the latest program being touted around in fitness magazines!

Jamie Bain is a strength and conditioning coach working in the Aviva Premiership with Gloucester Rugby. He has an MSc in Strength and Conditioning and nearly a decades experience working in elite rugby. He is also Director of S&C for RugbyRenegade.com and runs his own blog called Strength Made Simple. Check out his website at www.strengthmadesimple.com.