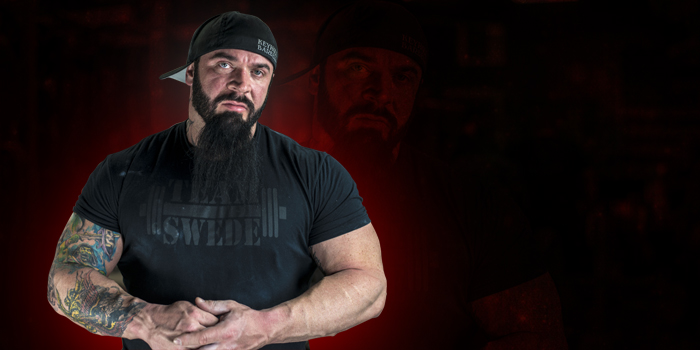 I have a silver tongue. Anyone who knows me will tell you I can talk and teach for hours on end without stopping, and be no less effective at the end than when I began. I'm not embarrassed to take pride in that.

Part of this is because powerlifting is something I am passionate about. It never gets old to me. The other thing is, I've repeated many of these very basic lessons hundreds of times. And over the years I have put a lot of effort into perfecting the way I teach them.

I've found my articles and videos to be the easiest way to impact the largest number of people these days and that's the reason I continue to provide them.

Logically, I try to defer to my own work, 5thSet, as the first point of reference when discussing most topics regarding powerlifting training and competition. But I do get requests to expound on some of the things I only covered briefly in the book's first edition.

When it comes to the topic of wraps, I am going into much greater detail in the second edition. It will be roughly twice the length of its predecessor, and cover a variety of topics the first did not.

For the time being, however, I thought I would put together a guide for you, here on elitefts. This way I can include videos and give you the best of both worlds.

I'll start by saying that whenever someone asks me how to do any specific thing regarding training or competition, I ask them what they are trying to accomplish with it. I want to know why they are doing it. This is important because the reasoning can often affect my recommendations.

To be sure you are on the optimal path for any specific goal, you have to understand the thinking behind the steps you are taking to get there. So I'm going to touch on not only the best strategies for how to wrap your knees and wrists for powerlifting, but also the important business of what we are trying to accomplish in doing these things the way I prescribe. 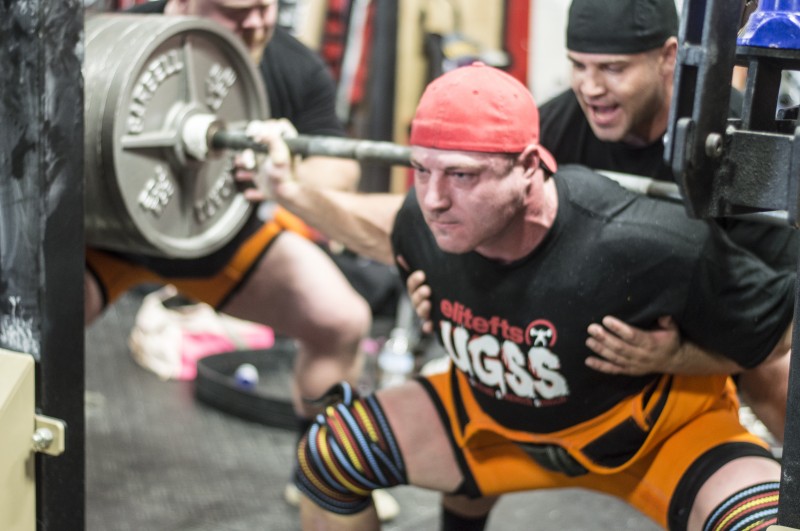 If you show up on day one of your wrapped training and start off in the strongest wraps on the market, things are probably not going to go as well as they could. This should be common sense, I know, but you'd be surprised.

Many factors will come into play when selecting the ideal wrap to start with, strength being the biggest. But even the strongest raw squatter would do better starting out in a moderate wrap with a less than aggressive application when making the transition into wraps, until they get the hang of it.

As with all things, there is a learning curve to squatting in wraps. They are equipment, and to maximize carryover, one must learn the trick of using them effectively.

With that said, let's use our heads when it comes to building up a good base of raw strength before getting into them. I'm not even going to give guidelines on that subject. You know it if you have a good base of raw training. When I say "good base," think years, not months.

I usually start even my strongest lifters off with a medium application tightness for knee wraps, and most will maintain that throughout their training.

Let's be real about something. In competitive powerlifting, we do not wrap our knees because it is easier on them or safer than squatting without. Some people will tell you that. But those same people are squatting more weight in the wraps than they could without, which is more than likely canceling their protective effect.

We do it because it allows us to put more weight on the bar. This is more stressful to every other part of the body, and I am by no means convinced that it is easier on the knees.

We wrap them for carryover, plain and simple. If you are legitimate competitor and wrapping for any other reason, you're fucking up in my opinion.

With that said, a tighter wrap job (with the right wrap selection and application) will generally provide more carryover. There is a point of diminished return regarding wrap tightness, but a much more common issue I see is too much wrap.

So, the wrap should be tight. We know that much. But how much wrap is ideal?

The ideal length of wrap is going to vary based on the size of the lifter. A good rule of thumb is to use no more than two layers of wrap, evenly applied. More than that is absurd, but that doesn't stop some people from trying. I've seen a 132-pound female lifter use three meter wraps applied in three or more passes. Paint the picture in your head of how that worked out.

As I said, in training I will apply a medium wrap for my lifters. Meaning that I will only use one layer of wrap, or possibly a second layer only above the knee. I demonstrate this type of wrap in the video below.

For stronger lifters, the wrap material is probably going to be upgraded to something more severe, but rarely have I ever seen a lifter who needs more than two passes when the wrap is applied correctly. If I'm wrapping a 275-pound lifter in a meet and using a three-meter wrap, there is going to be plenty of length left for a pig-tail when I am done. The difference between a 275 who squats 600 and a 275 who squats 800? It should be purely the severity of the material used, since they are roughly the same size.

There are other ways to do things, like more passes with a weaker wrap, but this way is the most consistent based on my experience.

One more thing to consider regarding application and then we will move on. Earlier, I mentioned that a tighter wrap can provide more carryover. A big part of making sure the wrap is applied as tightly as possible is pre-rolling it, either with your hands, rolling it up very tightly as you stand on part of it, or ideally, using a wrap roller to pre-stretch the material as you roll it. Working with a wrap that's been pre-stretched and rolled in this manner allows you to apply it considerably tighter than you would ever be able to otherwise, and it makes the process much easier.

Earlier I touched on maximizing carryover from knee wraps by learning the trick of using them effectively. That is only one piece of the puzzle. A very important piece, but still not the whole picture.

In order to get the most out of knee wraps, a lifter must honor the specificity of the wrapped strength curve. That is to say if a lifter is training for a wrapped meet, most or all of their working sets should be performed in the wraps. I have the lifters I coach perform every working set in wraps in this case.

Doing so not only trains the specific wrapped strength curve but also allows the lifter to learn important technical components of the lift. For example: maximizing speed on the descent, to get the most out of the transfer of kinetic energy during reversal.

While there may be a disparity between the wrapped and raw max at the end of a wrapped cycle, it has been my experience that it does not take very long at all for the lifter to close that gap once they begin training raw again. In fact, once the bottom end of the raw squat is allowed to "catch up," it is not uncommon to see surges in raw strength well above previous raw maxes. This makes staggering wrapped and raw cycles a reasonable strategy for increasing even raw strength. 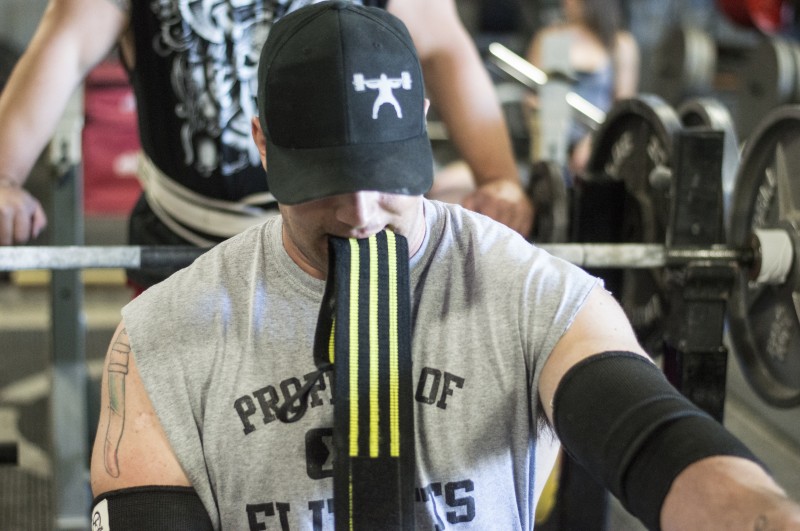 I'm going to put this as plainly as I can. Every powerlifter on earth should be wrapping their wrists for bench press and squat. It's important to stay open to other people's perspectives, but this is an issue I won't be moved on. There isn't a single logical reason not to do it. And if you are going to do something, you might as well do it right.

What is the weakest link in the chain when it comes to holding the bar on your back during a squat? If you said your wrists, you're even smarter than you look.

"But my wrists don't really hurt."

How do your elbows and shoulders feel? They have to pick up the slack when the weakest joint (your wrist) gets forced into a bad position by a loaded squat bar.

I've had lifters tell me their elbow and shoulder pain diminished completely not long after they began wrapping their wrists. That reason alone should be more than enough for you to wrap them when you squat.

When it comes to the bench press, I'm going to include a video of why you should wear them and leave it at that. Feel free to skip the first 25 seconds and keep an eye on the bench presses.

Whatever the lift, the objective of wrapping is to lock and protect the wrist joint.

While the objective is different than with knee wraps, starting off wrapping your wrists with the strongest material and as tightly as possibly is still probably not going to be your best bet. While it isn't the most difficult skill, using wrist wraps is a skill, nonetheless, and should be introduced as something to be learned.

As far as how to apply them and what type or length is optimal for a given lifter, I made you guys another video. Enjoy.

This guide stands as an excellent point of reference. If you've found it helpful, please share it. And as always feel free to contact me with topics you'd like me to cover in my column.