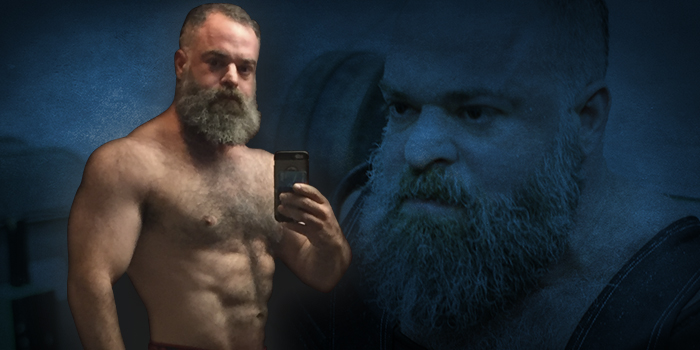 40. That was the magic number.

No matter how fat or out of shape I got, 40 was gonna be the turning point. That was the age I’d finally get my shit together and get into shape.

At least that’s what I had always promised myself as I was busy getting out of shape.

Like most powerlifters, I’ve always bought into the old adage “weight moves weight”, and as my numbers grew, so did my ass. I started my lifting career in the mid 90’s lifting in the 148 class, moving up to 165 after only one meet. I spent a few years there with some success but never hitting my goal of an elite total. Although I knew jumping another class would raise the required total higher, I was clearly outgrowing the 165 class.

RELATED: The Deconstruction of a SHW Powerlifter

On a visit to Westside almost 20 years ago, I asked Dave Tate what weight class he thought I should be in, and without skipping a beat he said “220”. I probably should have been more specific. I was really asking if he thought I should move up to 181 or not, but I guess I got my answer regarding staying 165.

I did move up to 181, and soon got my elite total, followed by a pro total. I set my sights on an 800 squat and 2000 total, but never quite made it. The weight cuts were getting harder and I thought back to my last weight jump and decided that it was time to go 198. By this time, I was 32, and entering the prime of my career. I made the jump, and I soon got my 800 squat, followed by a 600 bench the next year, and a qualifying spot for the XPC finals where I finally hit 2000. The next year I won the class with 2075. By this point, I was 36, and a new father.

While I wasn’t what most people would consider “fat” I wasn’t exactly lean either, and I was feeling the effects of walking around at over 200 pounds year-round at 5’5”, especially with my increasingly severe sleep apnea and asthma. 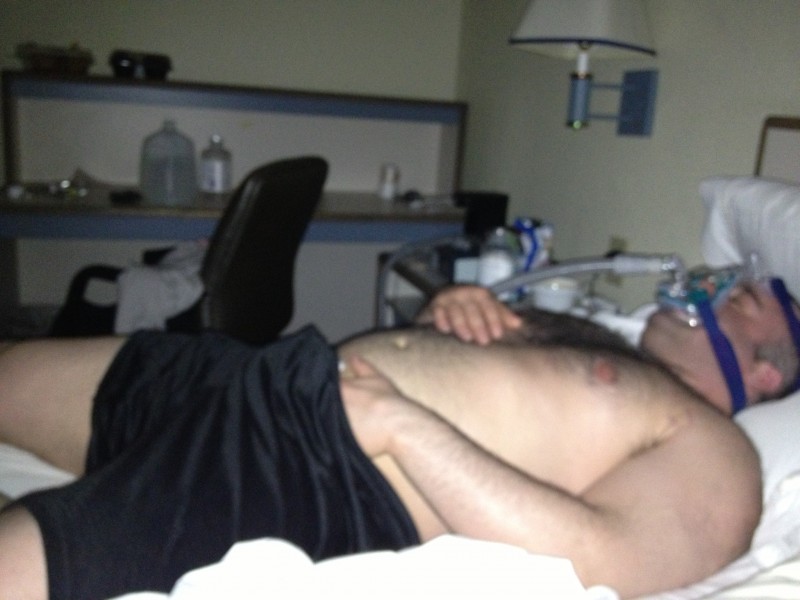 By this point, my lack of conditioning had become a running joke among my elitefts teammates. Dave Tate and Vincent Dizenzo would constantly joke about my being the worlds smallest super heavyweight because I had all of the symptoms of a 300-pound. man, but without the numbers.

Seriously, when Dave Tate and (pre-weight loss) Vincent Dizenzo are making fun of you for being fat, you may have a problem.

I was also starting to fight some severe back pain and soon decided to take time off from full lifting and focus on chasing a 700 bench.

Yep, jumped another weight class to 220. Bombed out of a couple of bench meets, and decided that the only logical explanation was that I just wasn’t big enough.

I was now 38 years old, and undeniably fat. I looked like shit and felt even worse. Short walks would leave me in a profuse sweat with a searing lower back pump. My sleep apnea was out of control, and I was constantly in a shitty mood.

Worst of all, I couldn’t keep up with my young son, which made me even more depressed and starting to wonder if powerlifting was even worth it.

40 was on the horizon, and I knew that it was time to keep my promise to myself. 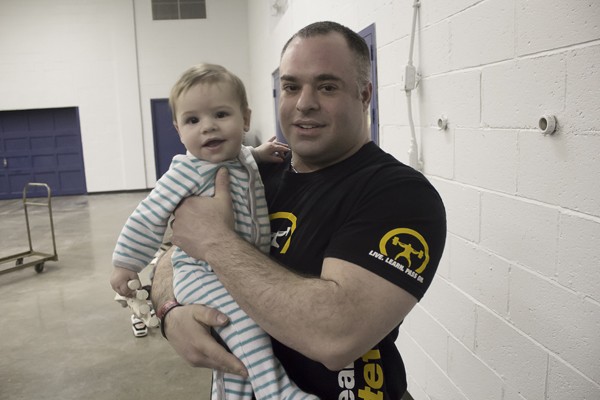 I set a personal goal to get not only get back to full lifting, but to do it back at 198.

The first thing I did was to cut carbs. Not completely, but I wouldn't eat them on non-training days. I would allow myself a big carb-heavy meal immediately post workout, but that was it.

Five months after my 242 clusterfuck, I did a meet at 198, hitting a pr squat, but limping through the suit and deadlift, making only openers. While it was an unremarkable meet, at least I had regained some confidence in my ability to make the weight.

Four months later I re-qualified for the XPC finals, where I would go on to have a pretty good day, making squat and deadlift PRs.

I felt much better than I did a year ago, but I still wasn’t what anyone would consider “lean”.

Staring down the barrel of 40, I had to be honest and ask myself if I was really keeping the promise I made to myself all those years ago. And the answer was no. And the second question was if I thought keeping this promise was compatible with staying in the sport. I answered this question with another one.

At this point, I hadn’t competed in the 181 class for a decade, and with all the years of gaining muscle, I knew that to make the class, I’d have to be WAY leaner than the last time around. But I also knew that If could successfully make weight, all the muscle I gained getting fat might allow me to hit those goals I thought I’d outgrown years ago.

MORE: How I Lost 30 Pounds in One Day: Secrets to Water Cuts for Strength Athletes

I decided to do the RPS Supreme Iron Warrior meet in September, and hopefully qualify for the XPC finals at 181. I was pretty confident I’d make the total (1810) easily, but again, it had been so long that I had no idea.

I started out by doing just what I had done to get to 198. I kept my carbs very low on non-training days eating more fat for energy. My typical food choices were meet of all varieties, whole eggs, fish, cheese nuts, and vegetables.

Immediately post-training, I would take in a large carb meal. Depending on the type of training session it was, I would vary the size of the meal. If it followed a light accessory day, it might just be a protein shake with juice and a banana. If I had just squatted, hello sushi buffet. In addition to replenishing glycogen, a big post-training meal also allowed me the opportunity to eat whatever crap I had been craving while avoiding carbs.

I also adjusted carb intake based on the rate of weight loss. If the weight loss was moving quickly and I felt a bit depleted, this meal might be big (hello again buffet) and even continue on for the rest of the day. If weight loss slowed, I’d tighten it up to a more moderately sized single meal.

I never count calories or carbs. I just don't have the patience. And honestly, if you’re even remotely tuned in with your body, you can tell when you’re over-eating and when you’re not. If you’re a physique athlete, then you need to be much more meticulous than this, and calorie counting is a necessity, but for my goals, this works well enough. 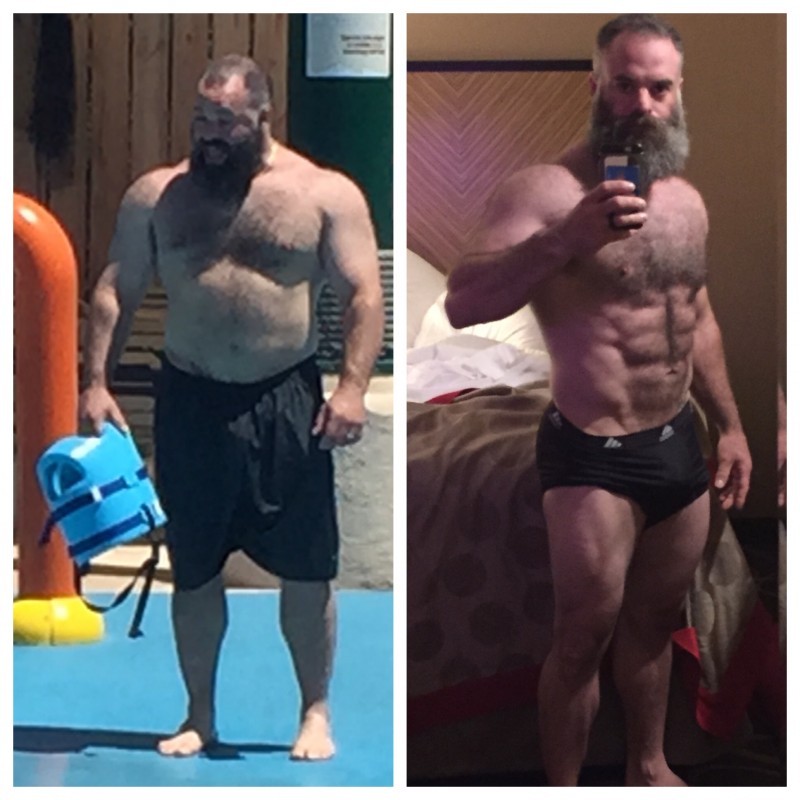 This approach got me from 208 to 200 pretty easily, but then I stalled at 200 even. Now eight pounds isn't very much weight loss to be hitting a plateau, but keep in mind, I was already eating pretty much this way to maintain 208, so my body had already accommodated to it for the most part.

While there are a lot of health benefits associated with fasting. my only real reason to do it was that it was a super simple form of caloric restriction. Basically, I would resist eating until about 2 pm, then I would be able to until around 10 pm. All I had to do is keep my evening meals to the same size as before, and I’d be in a caloric deficit.

In case you’re wondering what a typical day of eating looks like, it’s generally this:

This got me to 193 in a few weeks. It was around June and I was within three months of my next meet. Now the challenge would be to maintain this weight loss while regaining some strength. I did an ok job, with my weight settled at 195. a couple of pounds over where I wanted to be, but I knew I could make the weight cut.

Despite the weight loss, training went well, really well. I was hitting comparable training numbers to what I was doing at 220, including the occasional PR.

A week out from the meet, I was still sitting at around 195. I bit heavier than I had hoped, but I knew the cut was still doable. I followed my usual cutting protocol and made it to about 183 the morning of weigh-ins. In order to pull the last two pounds, I woke up an hour early and used a hot bath, which got me under the limit.

I’m generally not crazy about using heat during a weight cut, because it tends to beat me up more than diet and water manipulation, but at least I was in the class and even if I was off, I would still have the opportunity to hit the qualifying total.

And crunching the numbers, I realized that this was also my best total ever by formula.

Fast forward to today, I’ve shed a few more pounds and am waking up at about 188-189 most mornings. I'm still intermittent fasting and will likely continue to do so because it seems to work for me. Since I’ve adjusted to the lower carb diet, the fasting doesn't seem to negatively affect my blood sugar, and I even find myself eating my first meal later than 2 pm some days. My gym numbers are still ok, despite not really training much since the meet, and the lower starting bodyweight for this cycle will allow me to gain strength without sweating the scale as much.

Most importantly, dropping the weight has made me a better husband and father. I can keep up with my kid (most of the time) and I’m not tired and cranky all day from bad sleep and crazy blood sugar swings.

Losing weight is a tough sell for most powerlifters because we tend to view weight loss as something to think about after your lifting career is over. Few of us consider the fact that dropping weight may be the most effective way to extend our careers. At 40, I’m lifting at a higher level than ever before and enjoying life outside of the gym more than I have in many years.

If your lifting career is starting to hit a stall, consider taking a “less is more” approach. At worst, you’ll probably sacrifice some numbers to feel a lot better. At best, you may find that you can have it all.