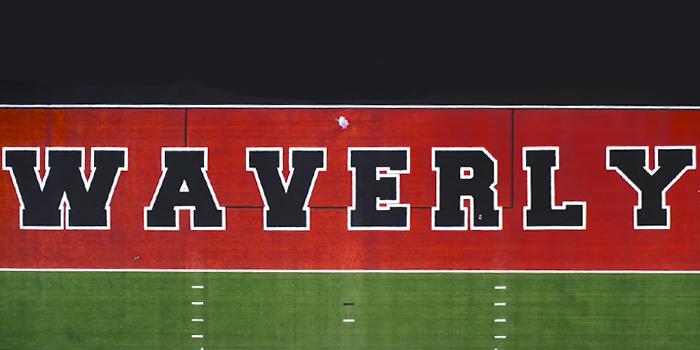 Waverly High School's weight room is outfitted by elitefts. I provide programming for their student-athletes.

In late February of 2020, I was in Waverly, Ohio on one of my coaching visits. I had spent Thursday in their lifting classes all day and was about to go help with the football lift after school when Coach Crabtree told me they may not have school the next day. The news sucked because I was planning on staying to watch the boys play their division rival the next night to clinch the first seed in the playoff bracket. At the time, five schools in the county were closed because they had so many students out sick and Waverly had a good number out too. So, Friday I packed up my stuff and headed home and the school was closed for the next two weeks, then from March to early June. NO organized school activities also meant no use of the school’s weight room.

Realize, this was supposed to be my trip where I evaluated the kids to start Phase II based on their progress from Phase I. The majority of the students were doing great picking up the movements and learning the ins and outs of the program. I was looking forward to advancing things in the weight room and pushing for some more intense and complex training. As important and satisfying as it is watching athletes laying a foundation and starting to embrace the training, nothing compares to the next level where you can take the governor off and let them start really kicking ass.  If we were at a concert, Type-O-Negative just did their opening act, and in their prime, Far Beyond Driven Pantera was about to take the stage and I was watching from the front row barricade.

Strength coaches across the country had to make a MASSIVE pivot and rework their training plans. Thankfully, public gyms were allowed to remain open after a few weeks of being shut down in Ohio and there is a great culture surrounding this team. I know this because every single time I have given feedback to a student or athlete in the weight room, they did well with the coaching. Not once have I gotten attitude or been shrugged off, and I’m just some Shrek-looking guy that shows up every few weeks to help in the weight room. Seriously, this speaks very highly to the adults these kids interact with on a daily basis.  The kids did a relatively good job getting some work in. We retooled some older workouts in the meantime to give some structure but it’s hard to control all the variables when they aren’t training together and are unsupervised. You have to be realistic about a situation like this. They’re going to do some or most of the work on their own but probably not all. I did not feel comfortable programming them through as if they were in the team setting. It was looking like Pantera wasn’t going to make the show tonight (Phil must’ve had a little too much Corona pre-show).

Fast forward to June 1 and the guys were allowed to start training again. This was a hot topic among coaches on social media:

“What is the right thing to do with our athletes when they get back?”

Many coaches were talking about starting back at ground zero in an effort to minimize the risk of injury. I remember hearing some talking about no barbells until the athletes can remaster their bodyweight movements again. I’m sure there are some who were going to make sure their athletes did their home workouts and test them when they got back. Like most things in life, the answer lies somewhere in the middle.

In Ohio, team activities were able to resume but they had to be split into smaller groups. In comparison to the spring before, the majority of the team hadn’t done much conditioning or basketball. We don’t program a ton of conditioning in the off-season but I’m pretty sure most of them had not done as much as we would have in the group setting. In addition to that, they had not done any team lifting since March. I’m a huge believer in proper progressions but we weren’t going to start at ground zero. I look at it this way, hardly any kids I played with or against did any type of organized strength training in the off-season. They probably had some of the worst loading protocols imaginable when it came to their coach getting them in shape when they showed up for camp and probably 98 percent of them weren’t sidelined with soft tissue injuries. There it is, proof we were tougher back in the day! Seriously though, my point is, these kids are not made of glass. The question that needed to be answered was, "What’s going to be optimal for where they are?"

The original plan for Phase II was to transition the players to a point where they could handle a lot of volume. Putting some size on, acclimating them to a large workload, and building a crazy work capacity was the goal. In short, we were going to keep the max effort and the dynamic work the same as we had in the past but crank up the volume on the accessory work. I’m a fan of building in volume on the smaller less taxing exercises. In the past, this seems to allow us to reach the goals of this phase and allows the athletes to recover at the same time. If you time this right, it will also allow your athletes to handle more in-season volume and not take away from their performance. Not only does this allow you to outwork most of your opponents in the short term, over the course of a couple of years this leads to a massive advantage. You can read more about this concept in Wave Volume to Win Games.

Since we were able to start training on June 1, we were basically eight weeks out from the start of mini camps/two-a-days. This is a time when their running/sprinting and tactical aspects of the game were going to start ramping up. With that being the case, this was not a point where we wanted to start piling on a bunch of volume training they were not accustomed to.

Enough talk, here is what we actually did:

This is a general and generic outline from two years ago. This is not verbatim. Use this article to get the basic outline of the program: 8 Weeks Til Camp–Summer Training for High School Football.

Based on feedback from coaches and where we thought the kids were, here is how we started. This was adjusted weekly. Normally you could program three weeks ahead of time pretty easily but we wanted to maximize the amount of ground we could cover going up to camp so we would evaluate and progress them as much as we safely could each week. The season would be here before we knew it…time to start working our way to the front stage barricade! 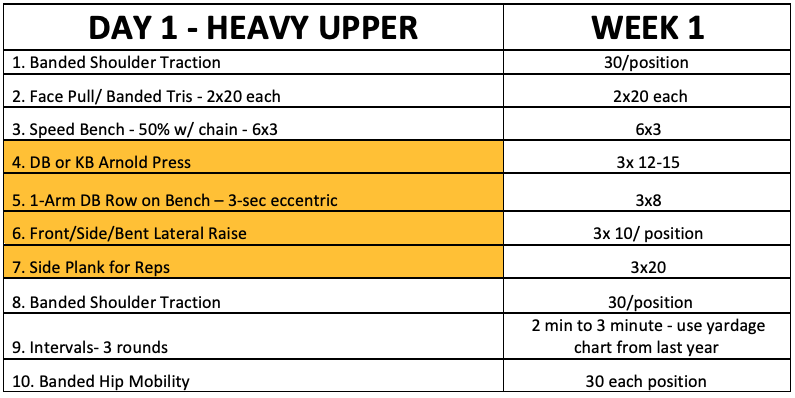 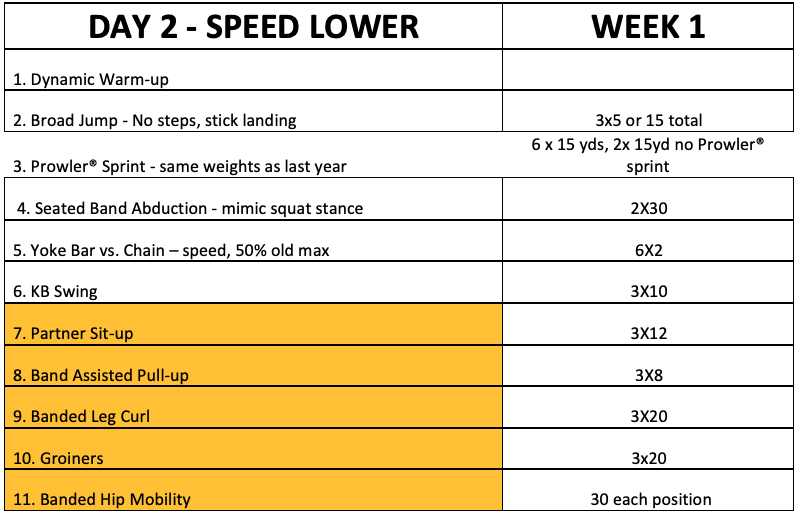 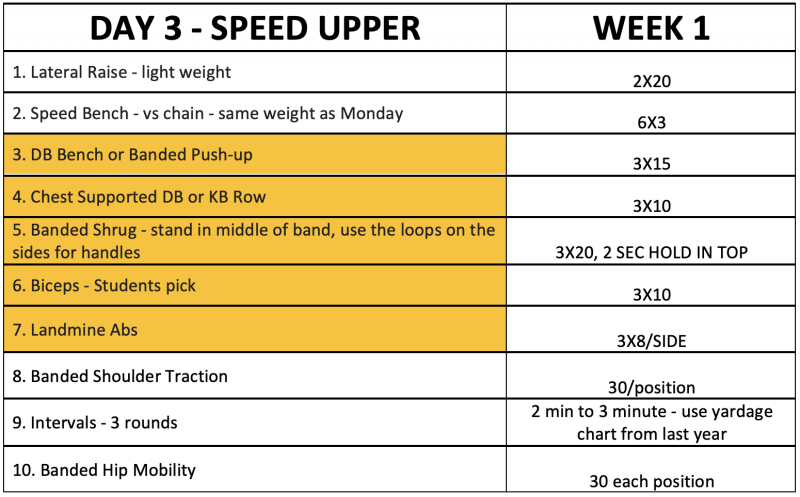 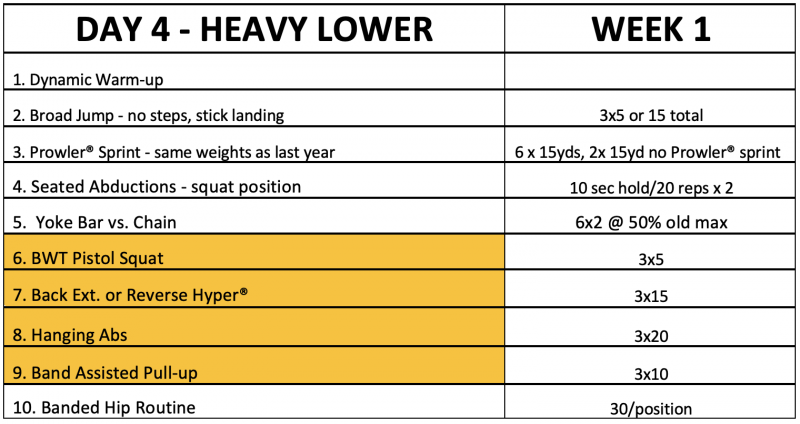 Here are some notes and things you should see from week one:

We were lucky, the guys did a good amount of work on their own so we were able to progress them relatively quickly. I’m not going to lay out the whole summer because that has to be situation-specific but hopefully, this can give some good ideas as to how to start your teams back up after a layoff. Due to the efforts of the players and coaches, the guys had one of the best years in school history and I believe no soft tissue injuries.  Hard work, works!