Biomechanical Analysis of the Deadlift 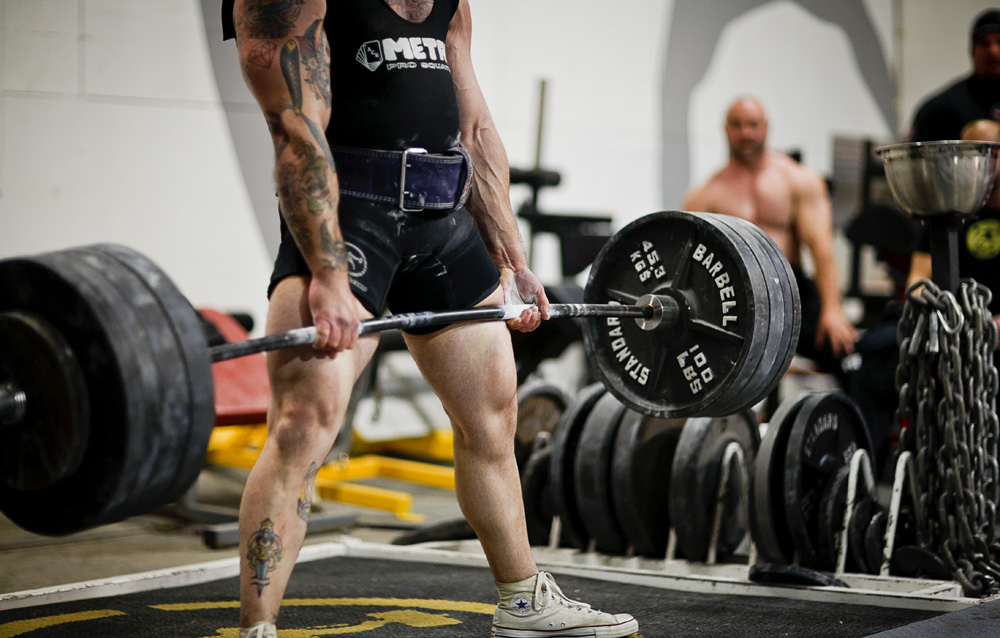 The deadlift can be considered as one of the best tests of overall body strength (Groves, 2000). It is a multi joint movement that in simple terms involves picking up a barbell from the floor and standing to the erect position. The movement includes the recruitment of the muscles of the hip, lower back, upper back, quadriceps, hamstrings and abdominals. If used correctly, it can be an excellent exercise to use in the development of strength, speed and power. During this analysis, the objective was to compare and contrast the biomechanical efficiency of two types of deadlift styles and determine which type should be used for certain body types.
Method:

The participant was given instructions on both conventional and semi round back deadlift techniques. The video recording equipment was set up at ninety degrees to the demonstration at a distance of approximately five metres away. This was to ensure parallax and perspective errors were each accounted for. Recordings were then made for a series of conventional and rounded back deadlifts. Multiple repetitions were performed in each style at approximately 80 percent of the lifters one repetition maximum. One repetition from each style was then analysed.

The participant for this study was one elite level power lifter who has been competing at national level for two years.

The equipment used was a Sony digital handicam 120x zoom video camera set up on a tripod to record the observations. A weights belt was used for back support, as well as an Olympic style barbell in conjunction with weight plates. All observations were conducted at Apollo Fitness Centre.

In competitive powerlifting, the deadlift is the third lift in order following the squat and bench press. It often comes down to performance in the deadlift to decide the difference between winning and losing a competition. There is a saying in powerlifting circles that the competition does not start until the bar hits the floor, meaning that a strong deadlift will often lead to a good competition result.
Much of the research that involves the deadlift has looked at sumo and conventional styles. Sumo style is used with a wider stance in which the lifter grips the bar with the arms placed on the inside of the legs. Conventional style deadlifting involves foot placement at approximately shoulder width apart and gripping the bar on the outside of the legs (McGuigan & Wilson, 1996).
Both techniques have been used effectively in elite power lifting competition. Conventional style places a large emphasis on the use of the erector spinae muscles because in this position the trunk is normally flexed forward. Sumo style is performed with a more erect and upright back alignment that allows for greater recruitment of the hip muscles to perform the lift (Piper & Waller, 2001).
The sumo lift is considered to be the more biomechanical efficient lift of the both techniques (McGuigan & Wilson, 1996). It is suggested that bar travel is minimized with a shorter stroke and aids the ability to recruit a greater number of muscle fibres from the posterior chain. Studies have indicated that sumo style deadlifting can reduce bar travel by nineteen percent (McGuigan & Wilson, 1996).
Studies by McGuigan & Wilson (1996) have indicated that in elite competitive powerlifting the majority of world records are held by lifters using the conventional style. Sumo style deadlifting has not produced as many world records but has performed greater lifts in terms of relative body weight. This gives rise to the suggestion that conventional style deadlifting may be suited to lifters of larger body mass with longer arm length and sumo suited to those of smaller body mass.
The conventional style involves the use of the erector spinae, trapezius, quadriceps and hamstring muscles (Stone & O'Bryant, 1987). Further analysis of the conventional deadlift indicates that the gluteal, latissimus dorsi, teres minor subscapularis, infraspinatus, supraspinatus and biceps brachii all assist with the lift to some degree (Farley, 1995).
The kinesiology of the conventional style involves setting up with the feet spaced shoulder width apart. Common practise is to use an alternating grip which involves one hand pronated and the other hand supinated to assist with grip strength. Common practise to set up for the initial pull involves aligning the shins close to the bar (Farley, 1995).
Keeping the load as close to the body as possible should assist with increasing the mechanical advantage for greater force production (Stone & O'Bryant, 1987). In contrast to this, some literature has suggested that keeping the load too close to the body may cause excessive drag and friction against the body that may decrease the efficiency of the lift. Correct starting position indicated by many texts suggests that the pelvic girdle is in line with or slightly below the knees. The back should remain flat and at an angle of forty five degrees to the floor.
Additional support for this method put forth by Daniels (2003) indicates keeping the back flat and placing the hips below the half squat position. This position is said to put the initial load of the pull on to the quadriceps muscles without placing undue stress on the lumbar region of the spine (Groves, 2000).

Choosing a style of deadlifting can best be suited to a person's individual body mechanics. Many variables come into play that may affect the efficiency of the lift. These factors include torso, leg and arm length (Stone & O'Bryant, 1987).
Movements are governed by physical laws. Understanding and applying biomechanical principles to deadlifting technique can result in the lift being more energy efficient and allowing greater peak performance. In contrast , poor body mechanics become less efficient and may cause injury (Stone & O'Bryant, 1987).
Mechanical work can be described as force exerted on an object over a distance it is dislaced (Siff, 2000). For efficient use of force, the displacement should be along the same line and in opposite direction to the resisting force of the load (Stone & O'Bryant, 1987). This gives additional support to keeping the bar close to the body while deadlifting which will assist with a more efficient movement and less wasted effort. This may be due to the reduced moment arm of fornce.
In contrast to much of the research put forth, I suggest a different starting position to the conventional deadlift that may assist those lifters who tend to be of taller stature with longer arm length. Both sumo and conventional styles have been studied extensively but minimal research has been done in what I call a semi round back style which may contra-indicate some previous research with regards to lumbar spine loading.
The semi round back style involves a similar initial set up to the conventional style but the hip girdle is set at a higher start position for the initial pull. This position would be almost a quarter squat position with the upper back kept flat and at a ten degree lean to the floor, as opposed to forty five degrees lean suggested in many texts.
Previous research has suggested that a person maybe more biomechanical efficient in the quarter squat position than in the half squat position. Studies have indicated that greater loads can be used in the partial quarter squat movement than the half squat (Siff, 2000).
The semi round method also allows for the bar to travel in a straight line. The shortest distance between two points is a straight line, therefore this can decrease the distance of travel. The conventional method causes the lifters lower limbs to shift forward in the starting position. This will cause the bar to travel in a 'S' type motion with the load moving away from the body and then moving back towards the body once the load has cleared the knees.
This gives rise to the idea of trying to turn the deadlift into the quarter squat motion but the load being off the floor. For this to occur, the lifter must have an extremely strong upper and lower back. The higher starting position can reduce the displacement of the load and therefore in turn reduce the amount of work performed.
Studies by Horn (1988) suggest that electromyographic activity in the spinal erector muscles were twice as active in conventional lifters when compared with sumo technique. Cholewicki et al (1991) studied the lumbar spine load of both sumo and conventional technique. No significant difference was found in disc compression force at L4/L5 regions using both techniques. There were significantly greater L4/L5 moments and load shear forces in the conventional technique. This may suggest that the greater forward lean of round back technique may further increase L4/L5 moments and shear forces indicating that much caution must be taken when considering this method for athletes as for the increased risk of injury to the lower back region.
This type of lifting conflicts with much of the research that suggests correct deadlift form. In the absence of previous research, experiential evidence has indicated that using the semi round back method has resulted in three athletes breaking world deadlift records in WPC and WDFPL federations. Other competition results include a further five lifters who have broken Victorian state and Australian national records. This may be due to reduced bar displacement and therefore reducing the amount of work performed. This technique has only worked for taller type lifters, which may be more biomechanical efficient for those with longer type levers.
Much assistance work must be employed to strengthen the abdominal, spinal erector, hamstring, gluteal and upper back muscles for this method to be effective. Care and patience must be exercised if considering using the round back method as a preferred style.
Further research in this area is needed to investigate differential leverages and the muscles responsible for effective motion. When considering various techniques, individual body leverages need to be taken into account along with the assessment of the individuals muscle strengths and weaknesses. Caution should be used before considering this technique due to the increased risk of injury. If employed correctly, the semi round back method may lead to greater competition totals for the powerlifter.