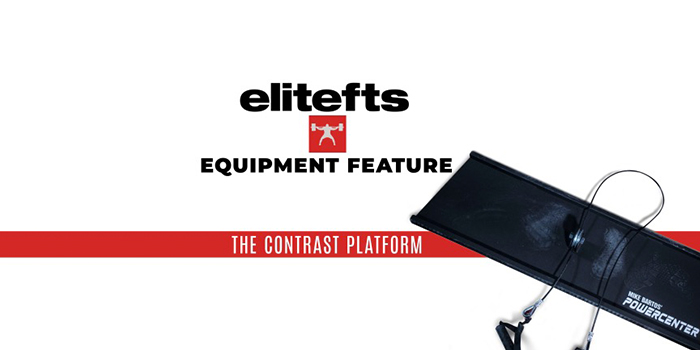 In this equipment feature, Mike Bartos introduces the Contrast Platform, a versatile platform for activating the benefits of Rip Cord and quick-release deadlifting. Not only will you see increased power output, you’ll also be able to address and strengthen sticking points through the utilization of isometrics. In this video, Bartos demonstrates the quick-release technique, traditional isometric movements, the Ladder Deadlift, Pause Deadlift, and three different ways to use eccentrics with the support of the multi-purpose Contrast Platform.

Bartos first walks through the quick-release technique, which just requires a partner and a barbell. As you stand on the platform and pull as hard as possible, your partner will hold you on the ground, thereby allowing your body to manifest additional force. Once they release, you will then transfer a significant amount of force into a relatively light barbell, thereby generating high force production throughout the entire range of motion.

When it comes to traditional isometrics, the benefits are clear: you’re strengthening sticking points by producing more force in specific positions where you’re weak. The key advantage of isometrics with the Contract Platform, however, is that you’re able to access those positions in the same position that you’re going to be in when pulling from the ground. This means avoiding positions in which you’re compromised, or positions that are not relevant to maximal lifting. The Contrast Platform enables you to slowly get into your weakest position, with your training partner stopping your body mid-range. You can then reap the benefit of completing the whole range of motion. Bartos also explains that you don’t necessarily need to utilize the quick-release technique in which you continue through to lockout after the isometric pull. Instead, you can perform repetitions in which you pull into the sticking position, have your partner hold you there for 2-5 seconds, and then lower the bar back to the ground.

Bartos then walks through a couple different techniques that are possible with the Contract Platform – the first is the Ladder Deadlift. This is an isometric exercise in which you pull and stop in three different positions before lowering back to the ground: mid-shin, mid-knee, and mid-thigh. As Bartos explains, the benefit of isometrics radiates around the areas in which you’re stopping, and thus, you can cover the entire range of motion – all in one set. The second technique that Bartos discusses for athletes and coaches is the Pause Deadlift. In this movement, the coach can have 100% control as to where the athlete stops by using the pulley, as opposed to relying on verbal cues. As such, the coach can stop the lifter in the exact, optimal position, and then after the pause period, the lifter can return the bar to the ground.

Finally, Bartos concludes with three different ways to use eccentrics with the Contrast Platform. The first is with regard to eccentrics for hypertrophy. In this movement, you lift a lighter barbell to the ground – once you complete the lift, your partner creates resistance, and then you lower somewhere between 5-8 seconds. When training for hypertrophy, Bartos recommends doing sets that allow you to be under tension for somewhere between 40-60 seconds. For strength training, Bartos recommends adding a heavier load on the barbell (roughly 80%), while your partner pulls maximally in an effort to lower you to the ground. These sets can be much shorter, at 1-3 reps for 3-5 seconds. Finally, when training eccentrics for power, Bartos advises that you lift a bar somewhere between 50-60% as explosively as possible, executing a Rip Cord Deadlift. In this movement, your training partner pulls down as you lower the bar for 1-2 seconds. When you return to the ground, you’ll have more stored elastic energy because of the eccentric overload, making the second rep in the set move at a much faster pace.