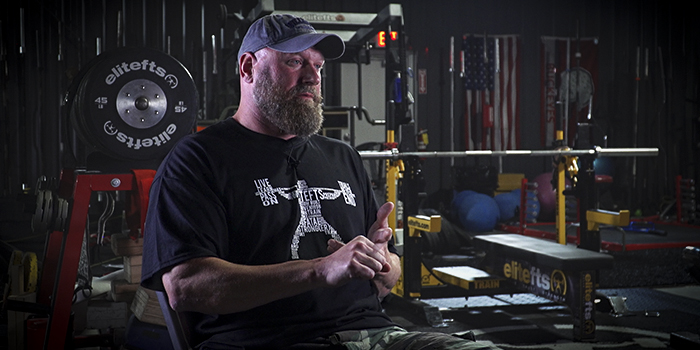 If you ask Matt Rhodes, one of the biggest problems in strength and conditioning comes from the sports coaches. Full disclosure: Matt used to be a football coach, so he feels like he has the right to say this stuff.

To be a sports coach, you probably played your sport in college and got a job as a graduate assistant and worked your way up. Certainly, sports coaches deserve the positions they’ve earned, but their credentials are lacking — at best, sports coaches have a master’s and graduate assistantship under their belts, which, Matt admits, are the same educational backgrounds as most strength and conditioning coaches. But there isn’t exactly a degree for becoming a sports coach, whereas there are strength and conditioning-specific degrees.

“If anyone has the credentials to do their job at a university, it’s the strength coach. Yet sport coaches will often tell us how we should do our jobs, and it drives me insane because if I went to their practice and said, ‘This is how you’re going to run a pass-rush drill’ or ‘This is how you should do things,’ there’d be hell to pay.”

Some of the blame does land with strength and conditioning coaches, particularly in the way they portray themselves. As a result, they don’t get respect, but that’s an entirely different topic for another day.

Matt’s noticed that just every practice is the same, regardless of sport, be it football, volleyball, soccer, etc. Everything goes the same: You’ll start the day with fundamentals, the basics, which eventually turns into teamwork toward the end of practice.

In the weight room, sports coaches want kids, typically non-lifters that are trying to master skills in their respective sports and not the weight room, to do fancy techniques they just aren’t ready to do. “These kids can’t even do this stuff on two feet.”

Matt’s dealt with sports coaches who’ve said, “Have you ever heard of moving the bar really fast with lighter weights?” And of course he has. It’s just not a thing he talks about because it’s common knowledge for strength coaches. “It’s like tying your shoes. We all know that, so we all preach it.” But for sports coaches? Eh, not so much. That’s why Matt has had to explain that he has to have athletes put on muscle first before making them fast because you can’t flex bone.

“They’re hell-bent on doing these fancy techniques and methods that aren’t the fundamentals, yet when you’re in practice, it’s fundamentals, fundamentals, fundamentals. But when you get to the weight room, you’d think that it’s got to be fancy and you’ve got to balance on one foot and stick a thumb in our nose and press overhead because it works on core stability. That’s a super-frustrating thing to deal with, but it’s a reality.”

Matt doesn’t know how to fix that reality, but he knows it is something that needs to be fixed.

“I have a sign in my office that says, ‘What is tolerated is encouraged.’ So if you’re (administrators) going to allow them (sports coaches), if you’re going to tolerate them telling me how to do my job, you’re telling me very clearly that I can now go to practice and ... now I’ve got some ideas.”

READ MORE: Strength and Conditioning is Failing: Our Relationship with Sports Coaches

Here’s another idea: Matt is really sick of people acting like experts even though they don’t know what the hell they’re talking about. These are the people who “know just enough to be incredibly dangerous with... (their) stupidity.”

Listen to the experts and let them do their jobs. That’s it. That’s literally it.