5 Common Strongman Weaknesses and How to Fix Them 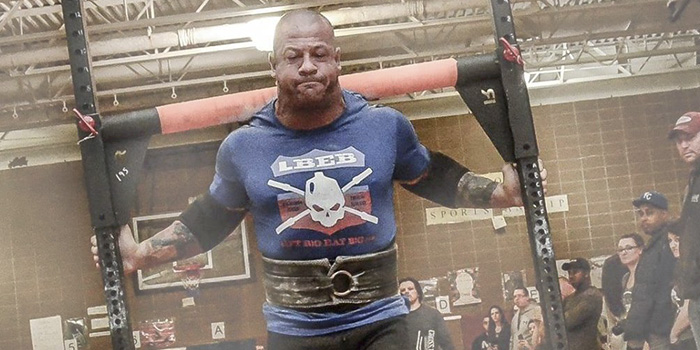 In the sport of strongman, it has always been said that the one who wins is the one who makes the least number of mistakes. Making very little mistakes can be a difficult thing when you have only one shot to do an event. This is unlike powerlifting, where you have three attempts, and can make up for a mistake. I would add to that statement that the one who wins is also the one with no weak points. Many times I’ve seen someone win whomever took first in any event, but that person was in the top two or three in all the events. There’s a lot of strategy to this sport, where sometimes you need to hold back and pick your battles, and other times, you need to dig deep and go all out. There are common weak points on many of the events, so let’s go ahead and cover what you can do to fix them.

The most common weak point on the press is the lockout. Most competitors are good at using their legs to blast it off their shoulders, but they lack the triceps to finish.

Do These: Seated Lockouts

In whatever event you are training for, take the implement and set it right at the top of your head. I like to do these with back support, but do these seated at least to take out the legs. Keep the rep range around eight to 12 reps if the event that you are training for is max reps. If it’s a 1-rep-max event, you can go as heavy as sets of three.

The deadlift is another event where it can be for reps or for a max weight. There can be a lot of weak points in the deadlift, and many of them you can look up here in the archives. For strongman, the most common I see are weak glutes. This is why you see competitors hitch the bar up when they have trouble locking it out. This is allowed in strongman, and I’m not saying not to do it, but if you have to hump the bar up, every rep you should be focusing on improving your lockout rather than masking a weak point. Hitching the bar every rep will only eat up time and energy.

Do These: Pause Deadlifts

I love the pause deadlift, as it forces you to have absolutely perfect form. Start with around 55% of your max, and do sets of five to start. You only need a two-second pause right at your weak point, which will be generally right below the knee. Focus on driving through the glutes and exploding to lockout on each rep. Make sure that you hold your breath until lockout. A common mistake on these is breathing out on the pause.

The farmer's walk is a full-body event, but I would say it’s mainly a test of grip when it’s at heavy weights. Training for a moving event like the farmer's walk can be tricky. You need to cycle through heavy runs to get your strength up, but going heavy every week will beat you up. You will need speed, as the event goes to whoever finishes the fastest. I know people who have great grip and can walk with more than 400 pounds in each hand but walk like they are in molasses. Training for this event at lighter weights and working on speed and technique is a must. However, the biggest weak point for almost everyone on this event is grip!

Do These: Fat Grip Farmer's Walk

Just as using a thicker bar will improve your grip for deadlifts, just adding a pair of Fat Gripz to your farmer's walk can be helpful. Train these as heavy as you can; there’s no need for speed runs here, as you are training grip. A great way to implement these is to do your normal sets of farmer's, then right after, do some down sets with Fat Gripz. This is a similar approach to powerlifting, as you would do your main movement, like the bench press. Then, your main accessory movement would be a close-grip two-board bench, for example.

The dreaded death medley is every heavyweight’s nightmare. These events generally aren’t crazy heavy, but they are more for speed. This event can be done in a couple of ways, but most of them you have to run back for the implement. This is where I see most competitors lose time and drop to the bottom of the pack. Generally it’s those who are very statically strong who can move fairly well with a heavy weight, but they lose when they have to run back for another implement. This weak point can be improved by also sprinting back like a madman in training, where again, when I see training videos, they do a slow jog back each time. This is usually followed by thinking that they will sprint in the competition and be fine. Then, when the competition time comes, they sprint back for one implement and are already gassed with two more to load.

Do These: Prowler® Sprints

Nothing will get your conditioning up and your speed like Prowler® sprints. The important thing here is that they need to be a sprint. I love a good heavy prowler push to really burn the legs, but you need to train these for speed. Keep the weight low and blast off. I like doing 10 sets of 100 feet with one minute of rest.

Atlas stones are the epitome of the strongman, and usually it’s the final event of a competition. Just like powerlifting, strongman competitions can make for very long days. This all depends on how the competition is run. If you have been around for a while, you know that sometimes you will be done by 3 p.m., and others might go on till 10 p.m. at night. Either way, you need to be in shape. I’ve seen people who are great at stones in training, but they just can’t put it together when it comes time to close the competition. This is simply because they are just out of shape. You have competed in four or five events already, and have given your all on them. You can tell the look on a competitors face when going out to stones if they are prepared or not.

The competitor who has the best conditioning, or GPP, will be the one to finish at his or her best level on the final event. This is no different than powerlifting. We’ve seen huge deadlifters fall apart after only their second or third attempts because they had no gas left. The better shape you are in, the faster you will recover, and the longer you can go. What you can do will be a variety of things. Some of my favorites are the rower right after training. Just do 2000 meters, and continue to beat your time. If you have a Stairway, do intervals on it, or better yet, get on the Jacobs ladder to get your heart pumping. Another favorite of mine is doing the Air Bike, doing two tabata rounds back to back. If you are short on equipment, all you need is a simple jump rope. Jump rope for one minute on, followed by 30-second rest for five rounds to start. Rotate these each week. Also, I would recommend doing conditioning at the end of a workout or on an off day three days a week.