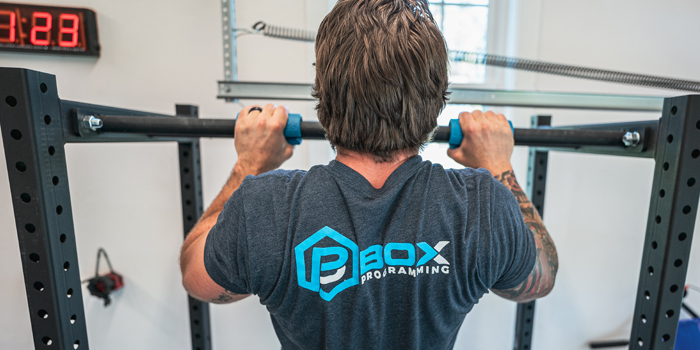 If you're like me, you probably love a fair amount of novelty in your training. Novelty, in my opinion, is a mistake made by many these days because too much variability and "fluff exercises" can take away from your gains.

It can also cause you to learn bad habits instead of reinforcing good motor patterns.

The fix is focusing on what we know to be true: the six foundational patterns of squatting, hip-hinging, push, pull, lunge, and carrying. With that said, there is an endless amount of variations that can be derived from these patterns.

Here's what you need to know:

This won't come as a surprise. I love the box squat namely because it allows us to serve a multitude of purposes, such as: reinforcing good motor patterns, measuring speed-strength or a maximal strength, and loading capabilities are lower because we are separating the phases of the lift, making them far easier to recover from while still achieving the same great cumulative training effects.

Now, if you've mastered the box squat and it's variations, adding bands pulling from the front will be a nice change. The reason being, adding bands from the front or Reactive Neuromuscular Training (RNT) increases the demand on the anterior and your ability to brace through dynamic movement. It also turns an otherwise simple movement pattern into more of a stability challenge so you can still reap the same benefits of the box squat while implementing a novel change.

I love the trap bar Romanian deadlift more so than I do the straight bar deadlift for hip-hinge work. The reason being, the trap bar completely changes the position of the load, bringing it closer to your center of mass and thus creates a different gravity line as the bar stays closer through the range of motion. Because of this, this variation is much more lower-back friendly. Anyone with many miles on their body will appreciate this one.

Add reverse bands to the mix, and you effectively increase loading capacity while NOT losing the ability to refine your hip-hinge pattern. Most equate reverse band use with supramaximal loading, and this certainly can be one advantage when used for true max effort work. More importantly, reverse bands allow for better mechanics even with less familiar loads. For this reason, I prefer to use reverse bands in a submaximal setting with sets of three to six reps.

The push-up is about as foundational as it gets for a pushing pattern, but often it's either forgotten about or bastardized. I'm assuming those that are reading this can do legitimate full range chest to deck push-ups.

So if you're ready to challenge your push-up pattern, look no further than adding resistance and oscillatory motion. By using a neutral bar either on a rack or the floor, you'll increase the level of stability requisite. By adding additional loading (in this case with a weight vest), you'll change the training stimulus and make the push-up less of a pure endurance-based movement.

Most love a good pull-up and for bodyweight only, the pull-up is the king of all bodyweight movements. To challenge the pull-up, we can use a fair amount of options like adding additional loading or increasing the grip requirement. Another less orthodox option is using a contrast method.

In this case, we'll be performing a pull-up with a dumbbell between our feet for three reps, then releasing the dumbbell and performing three to five more strict reps. The contrast of additional weight to bodyweight provides a neuromuscular component allowing you to, in essence, feel like you can perform more strict reps.

The level of difficulty of holding a dumbbell between your feet adds a level of accuracy and demand on the core, far greater than a standard loaded dip-belt weighted pull-up.

We talk about the importance of horizontal row variations quite often, but a new variation you can add as a high-volume finisher (which is a staple in our programming done with bands) can be done with a heavy band using an incline bench.

Attach a band to the lowest point of the rack. While this variation is challenging, you won't be using it in a hypertrophy setting of 8-12 reps per set—more like 25+ reps per set.

In this case, I've also added isometric holds. To perform, you'll do ten explosive reps plus a ten-second hold for three cycles. Feel free to get creative with this one.  If you use a heavy enough band, this should sting!

The reverse lunge is a well-known and highly regarded single-leg exercise. Add the safety squat bar with front foot elevation, and not only do you have an increased level of difficulty, but you've also increased loading capacity vs. holding dumbbells in your hands.

In this case, we're using the safety squat bar, which while it's not mandatory, provides a different challenge than a standard straight bar (the camber of the bar and position in the front rack.)

The loaded carry is an incredibly versatile tool as we know and something we've talked about used in both strength and conditioning scenarios numerous times over.

Typically I stay away from including the barbell in these articles for logistic's sake (space it takes up to perform sets). Still, the front rack carry is not only relatively user-friendly to get into position, but most commercial gyms have outside areas (especially today amid the COVID pandemic) for people to perform such modalities.

In this case, we'll be using heavier loads for shorter distances used in a strength scheme. Four to six sets of 20-30 yards will fit the bill. I'd recommend holding the barbell with arms crossed (bodybuilder style) since walking in a true front rack position could be uncomfortable and stressful for the forearm extensors.

Varying your training is part of the process of avoiding hitting the proverbial wall. Remember that your six foundational movement patterns should have a bearing on the direction you take.

Far too often, the answer to your aches and pains, or your lack of making consistent gains, lies right in those patterns. For example, we hear of common ailments such as lower-back pain clearing up.

The best part is the variability to these patterns can be 100 percent individualized up or down the pyramid of patterns to match your ability and needs. Realize, just because this article highlights some of the more challenging variations does NOT mean you have to start with those necessarily. Harder isn't always better.