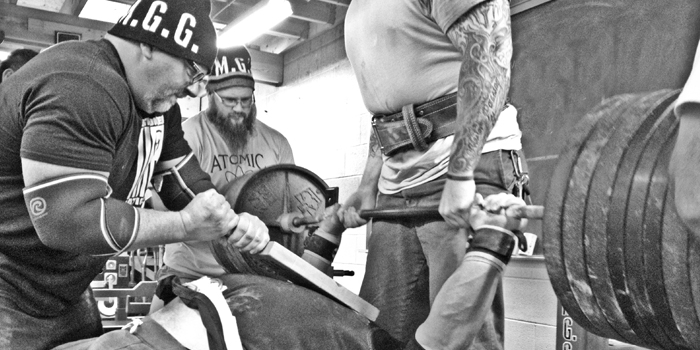 Wrist straps are one of these tools for the powerlifter with regard to the job of building a strong and powerful back. With regard to this specific tool, there are times to utilize it, times not to, and some confusion along the way.

Let’s begin with the purpose of this tool, and that is while during pulling movements, the wrist strap serves as the primary way to grip a given apparatus as not to over engage the hand, forearm, and biceps. For example, an old fashioned pull-up is a great movement to build the back, but for lifters who are heavily muscled or carry weight in other areas, the wrist strap allows for them to focus more on their back and less on having to grip that pull-up bar. The same holds true for the barbell bent over row. It’s a meat and potatoes movement for back development, where the straps work to keep the strain and focus on the back, not the limiting factors of the hand, forearm, and biceps.

Now and again you will hear beginner- or intermediate-level lifters mention that when you use the wrist strap, you are not building your grip strength. Although that is a true statement, it is also a basic surface statement, as the pull-up and bent over row are about building the back, and the side effect of those back builders is utilizing some grip strength. We work our grip loading up 800 pounds of plates on the squat bar, too, but that is not why we squat.

Working the grip specifically and purposefully to build tremendous grip strength for your deadlift and other movements is it own separate training, so let’s not negate developing our back fully at the sacrifice of a mere ancillary benefit. Let me put it another way that our true powerlifters can relate to.  You grill a nice thick steak to eat the steak, not for the sauteed mushrooms and onions on the top.

So to be clear, all barbell and dumbbell movements have the residual effect of helping develop some grip strength, but in both my experience as a powerlifter and having worked with powerlifters for decades, once you start pulling over three times your bodyweight, you need to add specific grip work into your training. Not using wrist straps for some other back movements based on a rationale of potentially negating grip is faulty logic and myopic in scope. 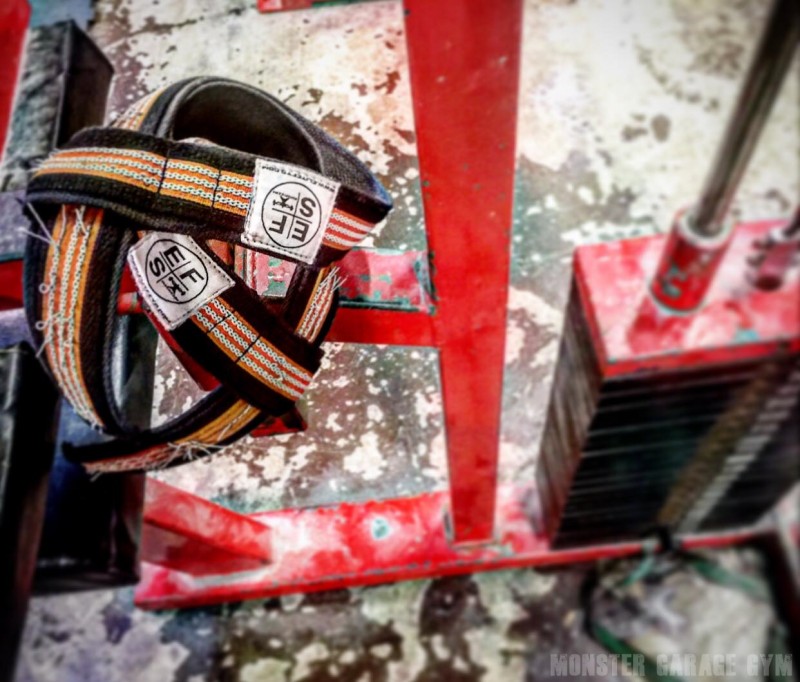 Back to the straps. With the straps in place, less grip is needed, and with that comes less forearm and biceps engagement, as when training back, you want your back muscles to encounter the brunt of the movement and to ultimately do the lion’s share of the work. That is the desired outcome, as a small muscle like the biceps or forearm or the muscles in the hand will always tire and fail faster than will a massive back.

So, should you get advice from lifters (good lifters wait to be asked to give advice; hacks and the lifters who "know it all" tend to give advice unsolicited, by the way) that using straps is not how “real powerlifters” train, take a good hard look at the big pullers in your gym, as well as historically, and you will see that they never compromise a strong, thick, muscular back for the sake of the modest grip work they would get from some movements if they negated the wrist straps. Real and uncompromised grip development comes from purposeful grip movements, be they farmers walk, Rolling Thunder work, Captains of Crush, elitefts Gripper Machine, Fat Gripz, and the like.

RELATED: How to Build an Athlete's Grip Strength

With that misnomer now taken care of, we can hone in on when to use wrist straps. Let’s begin with the deadlift. In my experience, deadlifting is something that needs to happen without the benefit of wrist straps for the most part. The over-under (mixed) grip will allow for you as a puller to be able to lift/hold a tremendous amount of weight, and deadlifting in a meet does not allow for straps (strongman competitions aside), so train like you are going to compete.

Training your deadlift is the ultimate strength movement, and unlike any residual grip benefit like with other back movements, deadlifting builds tremendous grip strength versus mere residual grip strength, so for your deadlifts, there should be no straps for the vast majority of your training. That said, there are some times to use straps when deadlifting. For those who are hook grippers, this applies to you.

First, as someone who uses the hook, I can tell you that we are by far in the minority when it comes to deadlifting. When the hook is used properly, you get the benefit of squared-off shoulders, no windmilling, no bicep engagement thus avoiding torn biceps, a little less distance to pull, and a grip like a vise. That said, the hook grip is viciously brutal on the thumbs.  Most who “try” the hook grip try it once as in Johnny Dangerously once. The hook grip is something one must be committed to 110 percent and with a never look back mindset. Hook grip is difficult to learn and even more difficult to stay with, but for those who do, “to the victor go the spoils.”

So for those using the hook, on deadlift days where you are doing high volume work, lots of sets and reps, and under 80 percent max weight, don’t destroy your thumbs and thus, use the straps on those training days. Save the thumbs for your heavy single and double training days. For those on the fence, take solace in powerlifters like Steve Goggins, a hook grip puller who has consistently pulled over 800 pounds for over three decades. Steve hooks but uses straps for those rep days. If it is good enough for Steve, it is good enough for 99.9 percent of the powerlifters out there. For those few who should disagree, that is fine, too. In fact, we will listen to what they have to say on the matter after they, too, have 30 years of 800 pounds pulls under your belt like he has.

When it comes to your shrugging, there are those days when you are going to do sets of 20 with 315 pounds and other days when you are doing just a few reps with 500 pounds. In either case, use the straps, as shrugs are for the pronated grip movement, and you want to have your traps feel the brunt of the work and not have your hands get tired first. Thus going back to the rule that grip work should be purposeful to attain its greatest development, it should not be something that is an add-on bonus.

For your selectorized movements, low rows, pulldowns, and the like, you are working those machines on non-deadlift days to complement your powerlifting through hypertrophy and blood flow and are working to engage the back for reps, so the use of straps is recommended again to allow you to focus on the squeeze of the back and not on the limitations of failed hand grip prior to the back becoming exhausted.

WATCH: Learn to Train X: Drop Your Nuts to the Bar Deadlift Setup with Ted Toalston

Dumbbell rows fall into this category as well. Do dumbbell rows to help develop grip, absolutely. But again, they do as an ancillary effect, so avoid compromising the reason you are doing the rows in the first place as we do heavy rows to build a powerful and heavily muscled back — not to work grip potential.

What we are saying is don’t lose sight of the reason for the movement or the tool.  You use chalk to help your bench press; you don’t bench press for the purpose of getting to chalk your hands.

Quippy little sayings are just that — quippy— but most never really made sense, nor were they originated by lifters who understood the mechanics of systemic training. “Real powerlifters don’t use lifting straps.” It is a saying without merit spoken by lemmings who spout quotes instead of understanding the mechanics of the human musculature. Avoid being led astray from the proper training path by lifters who train with their vibrato and ego versus knowledge and experience. Quippy little sayings are trite, and powerlifting is for the serious-minded. Remember, bullet points of mere anecdotal data can never impart the copious information that the full document can. Said another way: clever sayings can’t override pragmatism and real results.

Based on a lifetime under the bar, when it comes to training grip, you train grip. When it comes to your back movements — big pulls aside — use wrist straps to help build your back. Never negate the intended purposeful and correct implementation of a lifting tool and its positive impact on a given movement for the sake of an incorrect perception of that tool’s non-existent deficiencies.

Wishing you the best in your training! Ever onward.