The End of the Unilateral Vs. Bilateral Debate 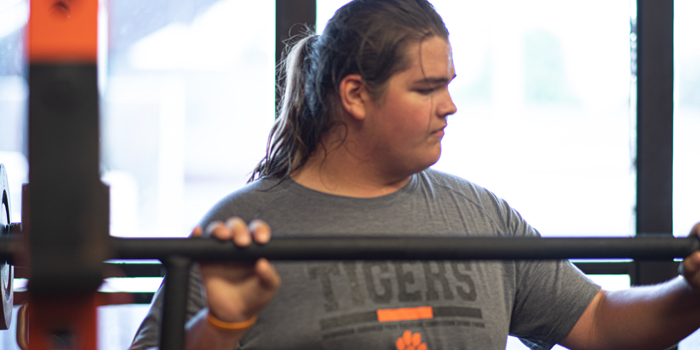 James “The Thinker” Smith said something along the lines of, “Debating exercises is pointless because all training is GPP." This has stuck with me. Because it stuck with me, I never understood the debate between single and double leg (or unilateral vs. bilateral) training. There is a benefit to both and time to do both. Why the debate? Another quote I have is from Dr. Dan Taylor. It went something like, “Everything is good in the right situation, so relax with all the arguing.” It’s part of another topic, but we should be okay with seeing something that is different from what we currently do. I’m not talking about the colored tripod catching, stability ball balancing crowd. Learn what you can, good or bad, and move on. Now on to the topic of the article.

Throughout my career as a coach, I’ve been fairly obsessed with progressions. This has been progressions of all types, but the one that is consistently on my mind is based on how we can best prepare our athletes for intense training. In other words, how do we go from day one to loading a barbell in our main movements with intensity as safely as possible? We feel that if we can improve strength in certain movements, we can then produce more power and ultimately more speed. We also believe that a stronger athlete will be more resilient to potential injury.

RELATED: The Integration of Unilateral and Bilateral Movements to Assist in Strength Development

For the majority of my career as a coach, I’ve also been of the opinion that athletes can benefit from both bilateral and unilateral exercises. I’ve heard and read a lot of people's opinions on both, and I think there are great reasons why both should be used. Like some of you, I’ve swung more in one direction than another at times, but never gone completely one way or the other. I feel like the benefit of having both and making both a priority outweighs not having both types of movements within a program.

Why We Doing Something New

Before the spring semester of 2020, we decided to try a different progression with a few teams. The idea was to work our way from emphasizing single-leg exercises to double-leg exercises. This ran for eight weeks before getting shut down for COVID-19.

Any team that started this new progression already had some training with us. They had either gone through another set of progressions that led to front squats, back squats, trap bar deadlifts and/or sumo deadlifts, and had trained at least a little during their in-season semester. 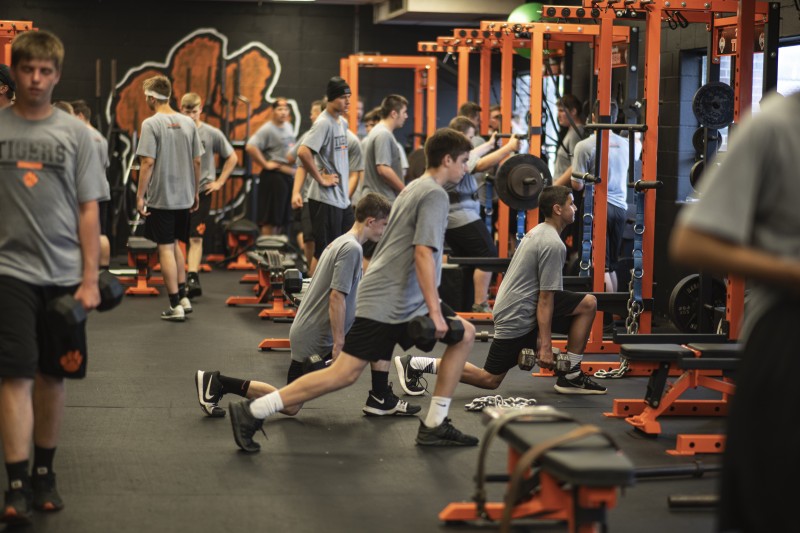 For more context, we have followed Cam Josse of Defranco's Gym (now at Indiana U) for a while, and he discussed a plan that made sense to us. Basically, it came down to training single-leg strength at the beginning of the off-season and slowly transitioning to double-leg strength because you can produce more power with two feet than you can with one. Generally, as we move throughout an off-season, we will start with strength as the emphasis, moving towards power and speed. This lined up well with what we have already done. I urge you to search for what he wrote and what he has talked about on podcasts for more information.

Every progression we use is to ensure our athletes' safety and help prepare them for more strenuous training later on. With any progression that we use, we always want to ask ourselves, "Are we keeping them safe by preparing them for what we want to do next?" and, "Is what we are currently doing the best way to prepare them for what we want to do later?" “Later” means multiple compound barbell movements weekly. This is a never-ending cycle of experimentation, implementation, information gathering, assessment, and tweaking.

What Did We Do

The thought was to really push some single-leg movements early on. We would start with higher volume and move to higher intensity. Since we were training the teams three days per week, we started with these three single-leg exercises as our main movements that we would really look to progress:

The goal was to transition to these three double leg exercises:

As I mentioned, we were able to get through eight weeks with this. We progressed each exercise or movement throughout that time. What we also wanted to do was make the transition from single leg to double leg as seamless as possible. To do that, we tried to introduce our double leg movements as secondary exercises when possible. Every few weeks we would flip flop one day of primary and secondary exercises (double-leg would become primary and single-leg would become secondary). We did this to slowly make that transition from single to double leg. This way, if problems arose, like complaints about soreness or something like that, we would have a better idea of the culprit, as opposed to making a more drastic transition of all single-leg emphasis during one week and switching to all double-leg the next. 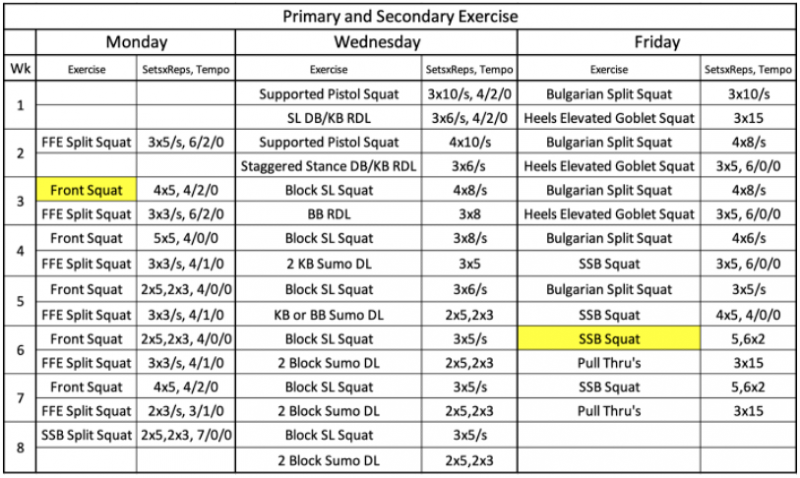 This was not exactly the same for each team but was close. Blank boxes in Week 1 on Monday was MLK Day and the school was closed. Week 2 on Monday we did not get through everything so there was no secondary exercise. Week 8 was the start of the non-traditional season with competitions. The team had been practicing, but this was supposed to be the first week we had a match so we were only training Monday and Wednesday. The rotation for the two times per week program that we would have used moving forward is below, with secondary exercises remaining fairly similar:

The first exercise in the chart was primary and the second exercise secondary. In all of the single-leg exercises, we consistently asked our athletes to use more weight than the week before and we tracked these movements. By the end, we had plenty of men using 45-pound plates on the Single-Leg Squats and women using 60-pound dumbbells on Bulgarians. For the bilateral barbell work, we are fortunate enough to have EliteForm for VBT at every one of our racks so we can push weights while limiting our exposure to technical failure. As I’ve said before, based on the speeds, a large majority of what we are doing is between 60-80 percent. Exercises highlighted in yellow are when we switched the bilateral to the first exercise.

Accessory exercises that we included throughout are hyperextensions, Reverse Hyper® extensions, hyperextension into glute ham raise, glute ham raises, partner glute ham raises, band leg curls, split squat holds for time, side lunge holds for time, Copenhagen exercises, pull-throughs, glute hame sit-ups, hanging knee raises, ab rollers, variations of pallof presses, and farmers walks. When we think of a block zero type of program for incoming freshmen and transfers, these are the building blocks with our primary pattern progressions. The accessory exercises continue to be a big part of what we do throughout an athlete's career. There is certainly the possibility that what we thought was an improvement in our big movements was due to better programming and more time with these accessory exercises. Or, the more consistent training of some of these teams during the previous semester. We’ll never know, but that doesn’t change how we felt about setting a semester up this way.

We really liked how this went. During the process, a couple of things stood out that got us thinking and liking it even more. One of those aspects was the range of motion we were looking for in our front foot elevated split squat and how we felt that could translate to the range of motion you need for a solid front squat. While performing the front foot elevated split squat, we were coaching our athletes to drive the knee as far forward as they could while keeping the heel on the block. We’ve done this for other exercises knowing how difficult it is to see a true improvement in ankle dorsiflexion. Attempting to improve this with external resistance came from conversations with our certified athletic trainers and physical therapists. We felt that loading this could prove beneficial. We also saw it as somewhat of a prerequisite. If you can’t drive that knee forward with your heel on the ground in a split position, why should we expect you to be able to front squat well?

Secondarily, we liked this setup because we were pushing something with intensity from the start. In the past, we’ve eased into our primary movements without much return on investment, other than learning technique under low load. Because we were pushing intensity from the start with the primary exercise, we felt like the teams were more prepared for the intensity with the bilateral movements.

Lastly, we felt that when we performed the bilateral exercise as a secondary movement, we were more prepared on a daily basis. What we did wasn’t necessarily a John Meadows type of warm-up, but we thought about it in a similar way. Let’s hit some smaller muscle groups first to really get the body warmed up prior to hitting more intense exercises. Benefits could include better blood flow to working muscles, better range of motion for bilateral exercises, and maybe some central nervous system potentiation.

Was there a direct impact on our strength and power numbers? Unfortunately, we were unable to verify this in any way since the semester got cut short. Subjectively, our bilateral movements looked really good and when we got to use them as primary movements, it seemed like we were able to progress them with intensity faster than normal. As I mentioned above, did this have anything to do with how we set up the semester? Maybe, maybe not. Maybe our coaches are just getting better athletes with strength training background.

We felt like we at least learned something by going about the progressions in the way we did. We will likely continue to try something like this moving forward, continuing to tweak small aspects to get the best outcomes. One thing is certain, we will continue to use both bilateral and unilateral exercises in all of our programs, leaving any debate unnecessary and behind us.

Bobby Fisk is the Head Strength and Conditioning Coach at NJIT. He can be reached through email at fisk@njit.edu. You can read his blog here.