The Post-Surgical Knee: The Stability and Proprioception Rebuild

In Part 1 of the Post-Surgical Knee series, we discussed how the bilateral range of motion (ROM) should be rebuilt following surgery and the immediate rehab phase. Following the range of motion rebuild, the person should be able to do a full ROM bodyweight squat without pain.

In the next phase, the person should have a four- to six-week phase focusing on balance, stability, and proprioception preceding them going back to sports training. This is done through the building of single-leg stability movements and posterior chain strength initially, and secondly, through landing mechanics and jumping, double leg and single leg.

RECENT: The Post-Surgical Knee: The Range of Motion Rebuild

Following a full post-rehab phase, the person will be in a much better position to participate again in high impact exercise with a greatly reduced risk of recurring injuries.

The Balance, Stability, and Proprioception Phase

The initial stages of the balance, stability, and proprioception phase will be performed through the slow rebuilding of ROM through single-leg movements and will eventually use more advanced dynamic movements, such as jumping and landing mechanics drills.

Proprioception is defined externally as where your body is in regards to its environment (for example, keeping balanced on an unsteady surface) and internally as where your joints sit in space while in a certain position (for example, an experienced weightlifter will feel when their knee goes past a usual level of valgus during a squat). Having a strong level of proprioception requires a slow progression beginning with slow-moving stability- and strength-based movements before beginning the dynamic plyometric movements.

As Josh Waitzkin stated in his book, The Art of Learning, one must “be able to do something slowly before we have any hope of doing it correctly with speed” (9).

The slow-moving single-leg knee-dominant movements that will be used throughout this phase are the pistol box squat, the skater squat, and the split squat. ROM should be dictated throughout these movements to allow three to four sets of 12 to 15 reps per movement. Once 15 or more reps can be comfortably performed, the ROM or load should be increased.

The pistol box squat is progressed in the exact same fashion as the bilateral squat, as seen in Part 1. To reduce the range of motion, plates will once again be stacked up. These plates will be removed once adequate stability and control have been reached. 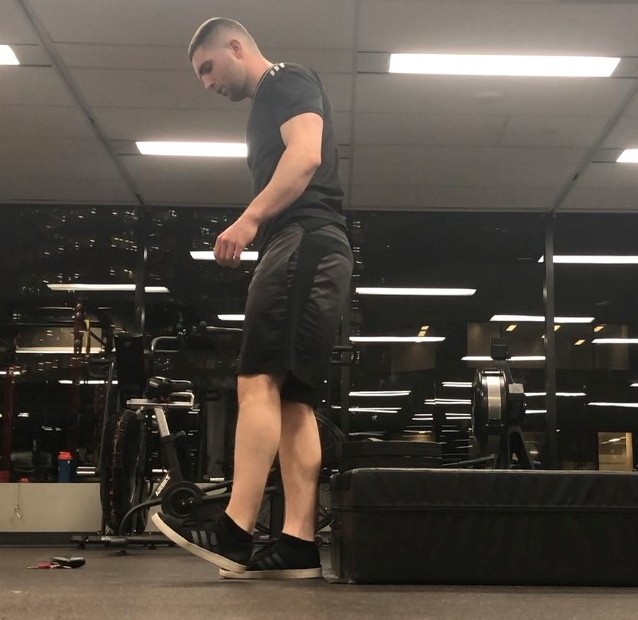 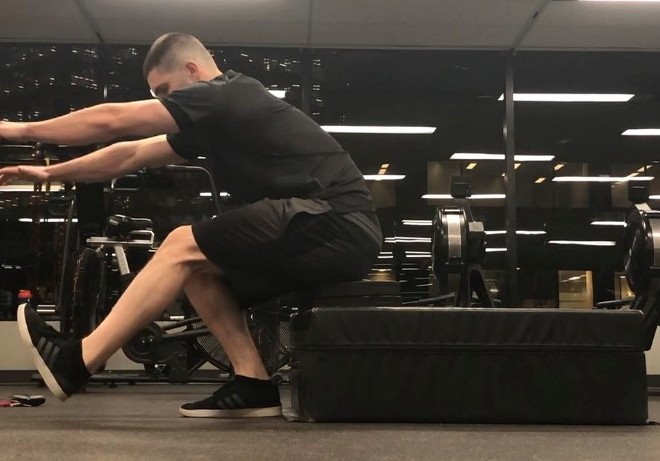 Much like the pistol box squat, the reduction of range of motion and the eventual slow, gradual increase of ROM is the most reliable way to improve strength and stability in the front foot elevated split squat. The use of plates being stacked up is, again, the easiest way to utilize this slow, gradual increase in ROM. 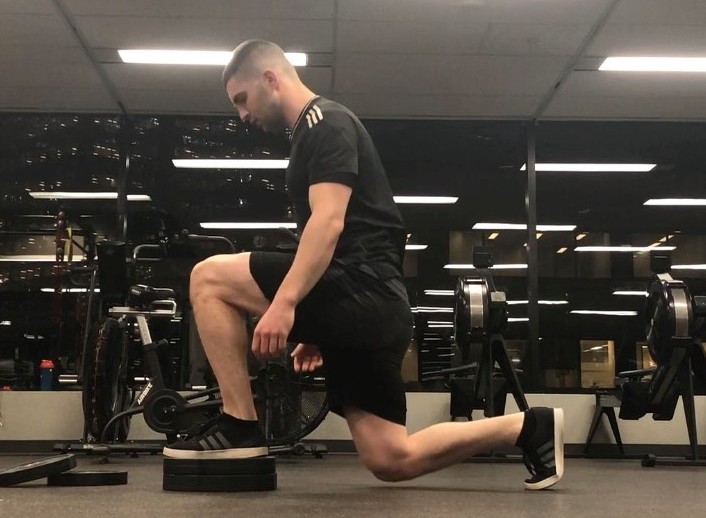 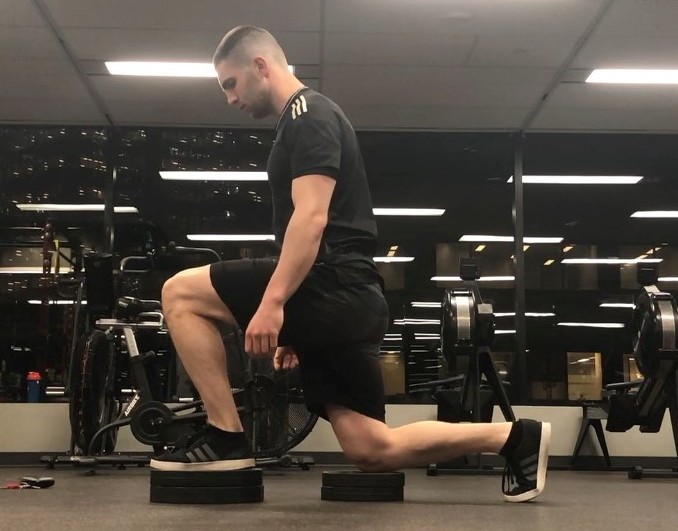 The skater squat is a movement where the person, while standing on one leg, reaches back with their other leg and tips their toe to the ground before returning to the standing position. The skater squat is beneficial to the person in the way that the person can easily dictate the range of motion that will be performed by either reaching further or closer with their back foot, depending on where their respective comfort levels are. 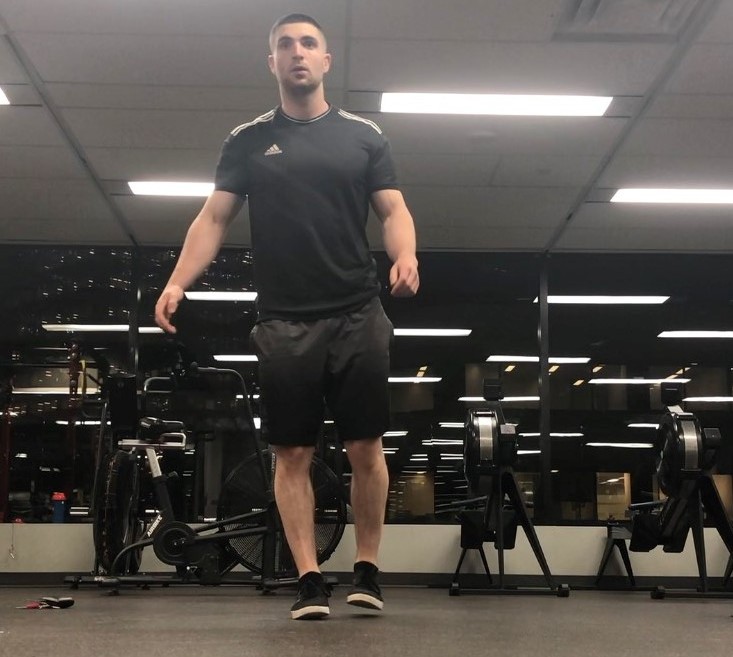 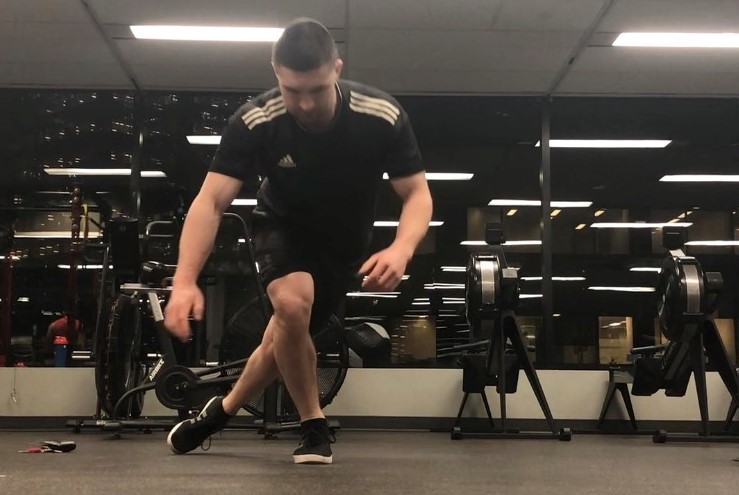 The Rebuilding of Stability and Strength in the Posterior Chain

After the person has initially rebuilt full ROM in the bilateral Romanian Deadlift (as described in Part 1), single-leg hip hinging movements should also be implemented in conjunction with the single-leg knee-dominant movements. The beginning progression to the single-leg Romanian Deadlift is the straddled single-leg Romanian Deadlift. This movement is performed from a standing position close to that of the front foot elevated split squat, but the movement is performed through a hinging of the hip, where the front knee angle stays constant throughout, but the hip angle will change. In the same way that the ROM is increased in the squat, front foot elevated split squat, etc., plates can be stacked up to reduce the range of motion and should be slowly increased. 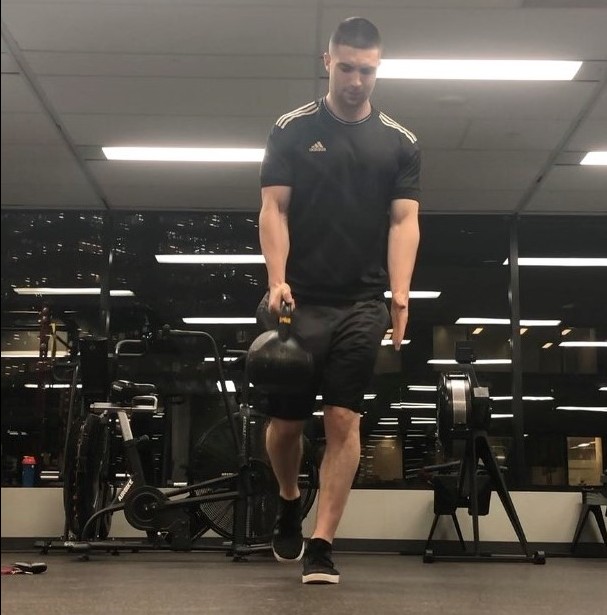 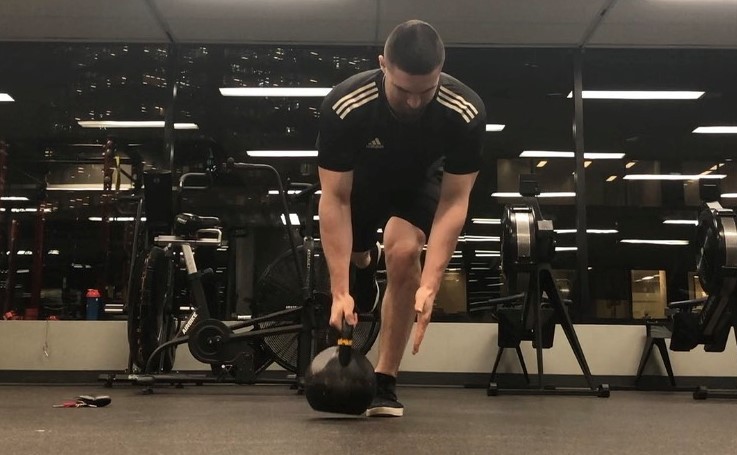 Once the person can perform the straddled full ROM single-leg Romanian Deadlift with no turning or hiking of the hip, the single-leg Romanian Deadlift (without straddling) with only one point of contact to the ground should be used. In the beginning, this will be done as a bodyweight movement, using a wall to standardize where the person’s range of motion ends. Once full ROM has been achieved with no compensations, a kettlebell can be used to load the movement.

Lastly, in the rebuilding of hamstring strength, the eccentric glute-ham raise, or “hamstring fall,” should be a staple in the post-rehab program. This is a bilateral movement, but its difficulty has led it to be in the second stage of the post-rehab process. The hamstring fall is where the person starts in a kneeling position. From here, another person will hold down the person’s heels. While keeping the person’s hips in an extended position, the person will try to “fall” as slowly as they can to the ground. Once the hamstrings are at their limit, the person will just drop and catch themselves with their hands and push themselves back up. This movement will take slightly less of a stimulus to cause a beneficial training effect, two sets of six to ten reps will be enough for somebody during a rehab phase. 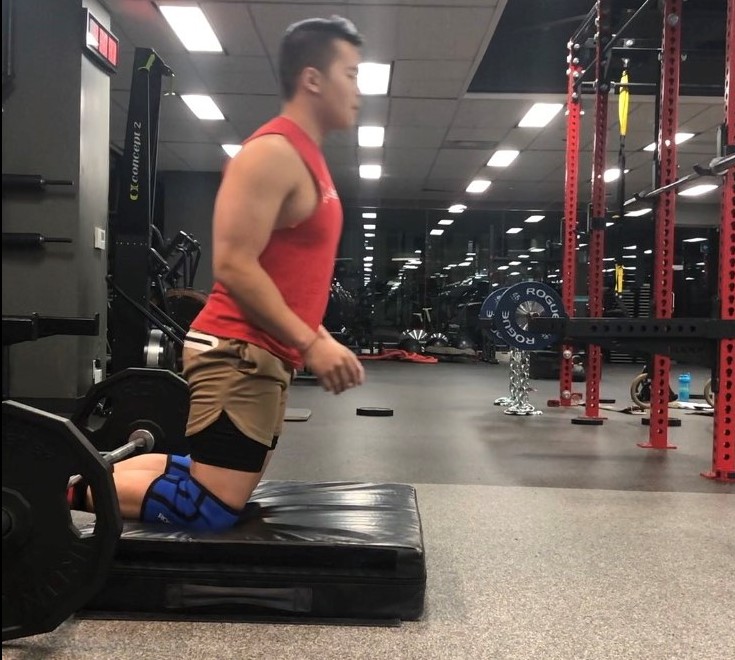 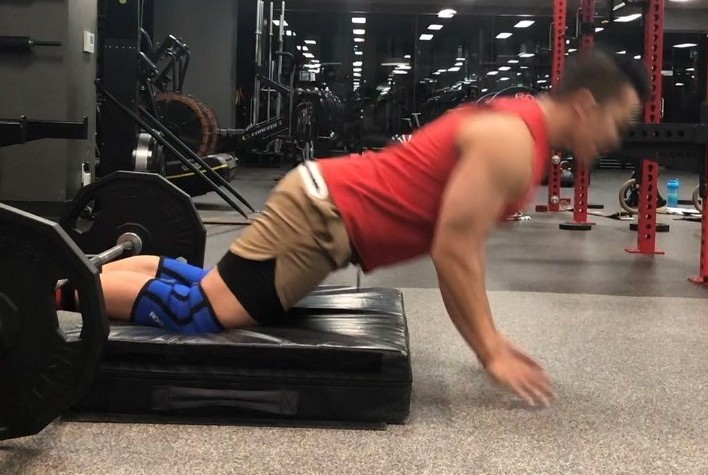 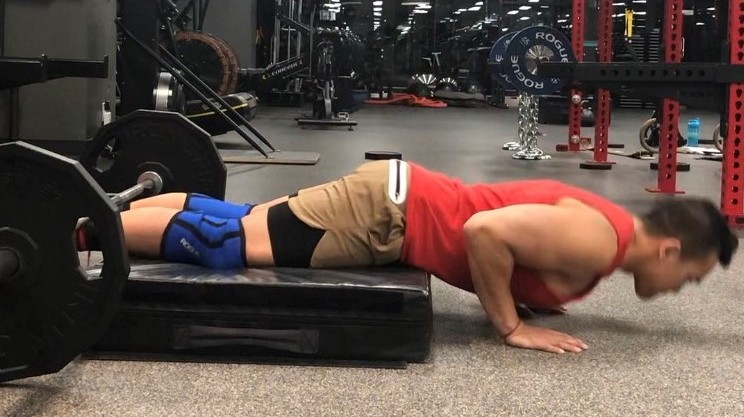 The focus of this movement is to improve eccentric strength (keeping tension while the muscle lengthens), as a lack of eccentric strength has been shown to directly increase the risk of recurring ACL tears and hamstring injuries among others (7 and 8). The focus on the eccentric portion of the hip hinging movements can be increased by ensuring a slow and controlled down portion of the movement. However, placing some emphasis on direct eccentric work while using the hamstring fall will undoubtedly increase strength and reduce the risk of re-injury. The hamstring fall will never be loaded; the way of progressing the movement is just by attempting to get closer and closer to the ground.

The Importance of the Slow, Gradual Increase of ROM

Throughout almost every movement in the Post-Surgical Knee series, the focus has been on the slow, gradual increase in ROM while keeping absolute control and stability. Having absolute control during a movement through an entire range of motion is of great importance preceding the eventual proprioception rebuilding phase, which will include plyometrics-based landing and jumping movements.

Much research has shown that the use of slow, eccentric work has a myriad of benefits for tendon strength and health, with respect to the recovery of chronic tendon issues like tendinopathy or tendonitis (1 and 2). Although less direct research has been performed on the use of slow eccentric training in relation to post-knee surgery rehab, the reasoning behind the benefit of slow eccentric training and chronic overuse injuries will be similar to that of a post-knee surgery knee rehab client.

The use of the box and the stacked-up plates ensure that the person will be using a range of motion that is suitable for a controlled eccentric and that momentum will be reduced throughout the concentric. This slow, gradual increase in ROM is the building block to having strength through the end ranges of motion.

Once adequate levels of knee stability, strength, and ROM have been achieved, dynamic movements should be re-introduced as the person prepares for high-impact exercise/sports again. The initial focus will be placed on force absorption and learning how to land correctly.

Research has shown that following knee surgery, landing mechanics are inhibited by causing the person to have a problem absorbing force through their hips. This forces the person to put excess pressure on their knees and ankles. This can be seen in a post-rehab patient in that they will regularly put too much weight through the front of their foot as opposed to the mid-foot, which will result in a louder, less controlled landing that will often result in a fall forward (3, 4, and 5). 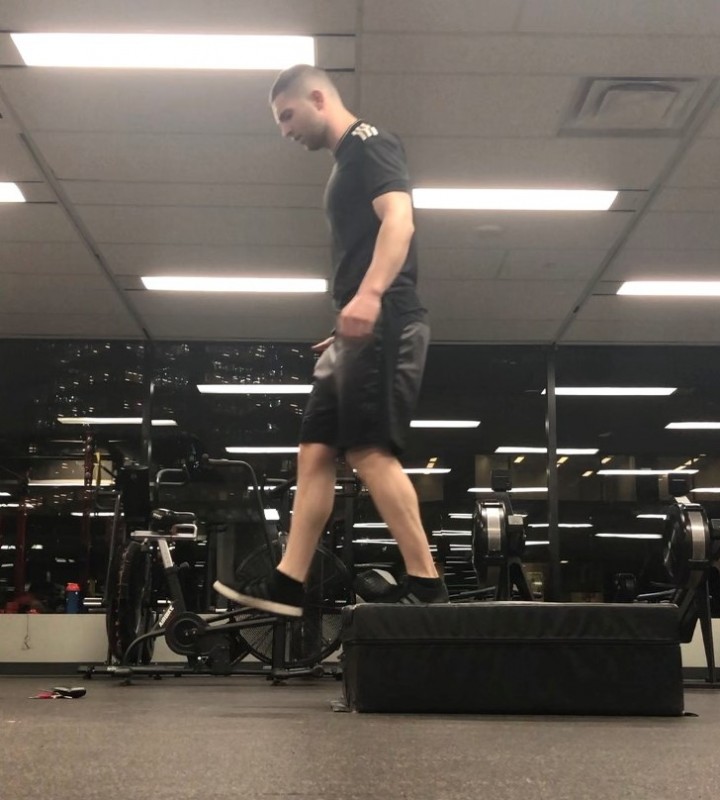 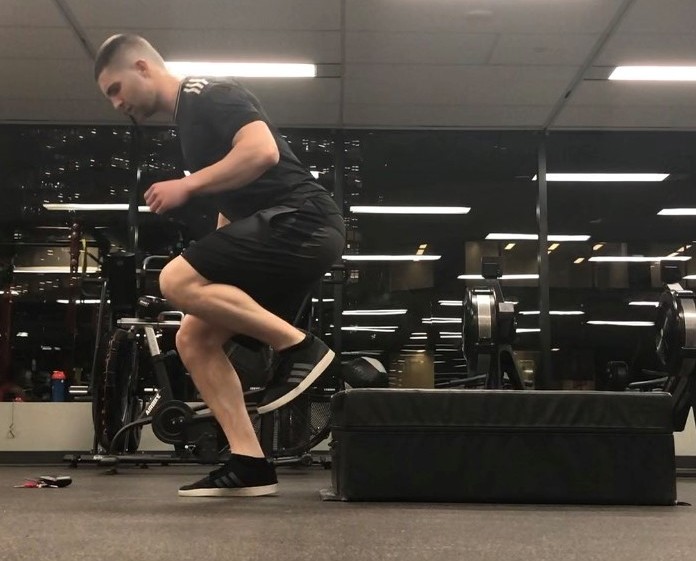 During the depth drop, the person will step on a platform and attempt to land in a stable position. The main problems people have in these movements are too loud of a landing, too much pressure on the front of the foot, and any excess knee valgus. Range should be built until the person is at least comfortable jumping off a box that is at knee height before the person should be allowed back to sports training.

During this phase, the person should also focus on the double-leg and single-leg box jumps (once the double-leg box jump has been trained to an adequate level of performance), focusing on the same cues that were used during the landing mechanics. The box jump is only used at a height that is suitable enough for the person to land softly through the middle of the foot and with no knee valgus. 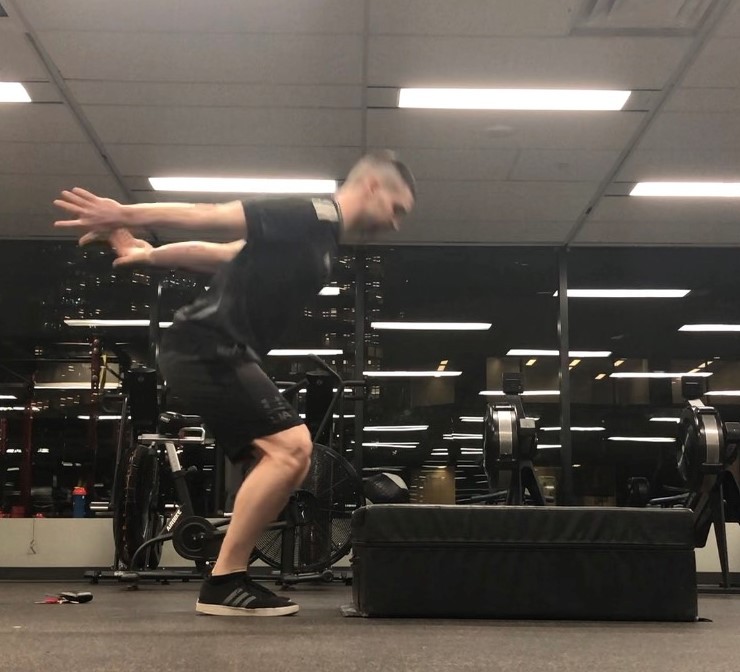 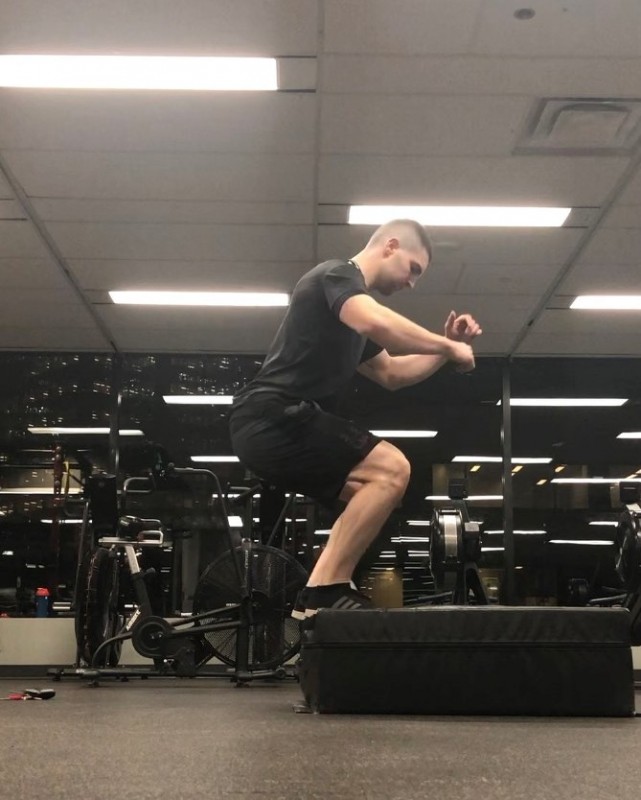 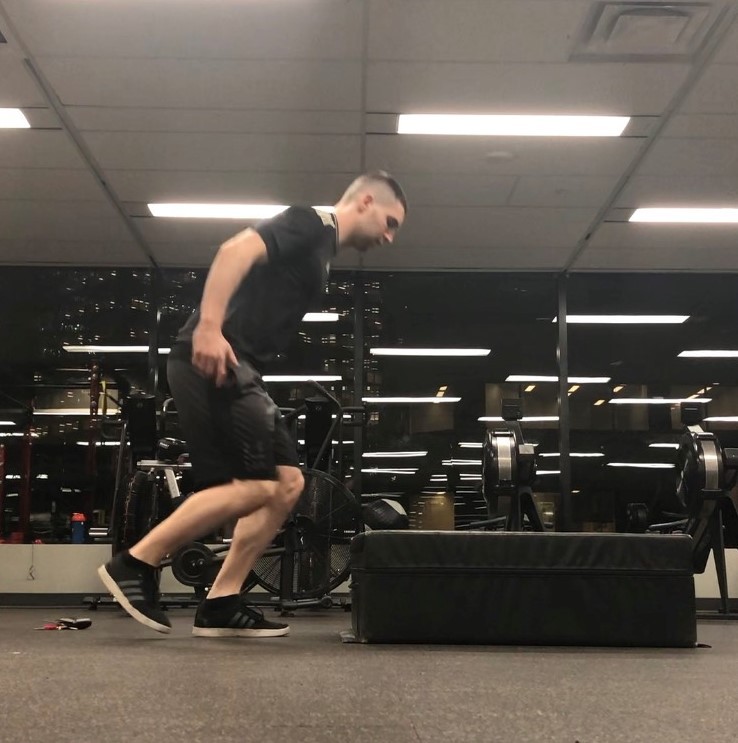 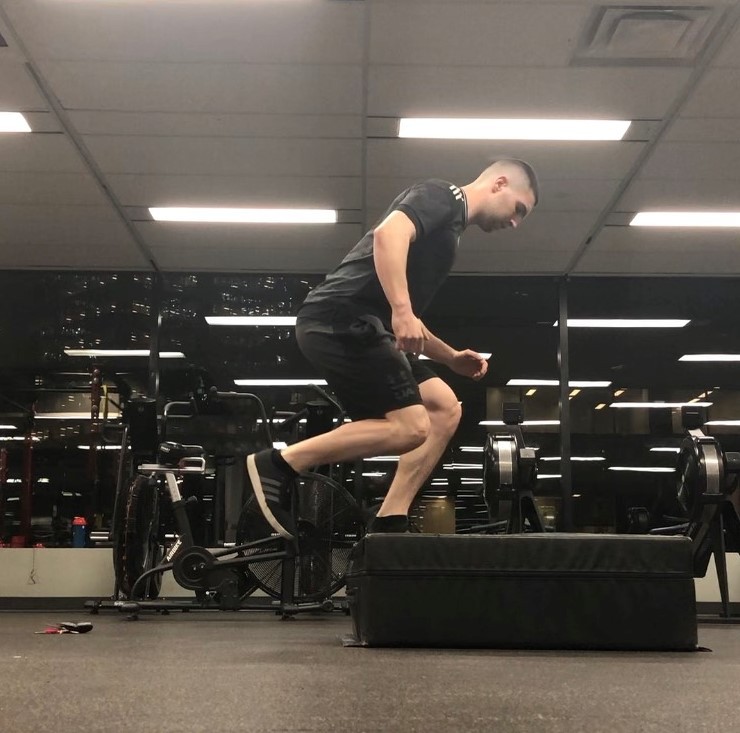 Once the person is confident in their landing mechanics and plyometrics drills with no compensations or pain, the progressions from here will depend on the person’s sports or training style. But once full confidence in the knee has been restored in single-leg balance, stability, and plyometrics drills, the person will generally be ready to (slowly) go back to sports training and competition.

The Importance of Training the Non-Injured Leg

One important note with respect to the rehab process is the training of the non-injured leg. Throughout the re-training process, it is very easy to only put a focus on the leg that is directly going through the rehab, as that is the leg that is of immediate concern. It can often be done out of laziness where the person does not want to put forth the extra effort to train the non-injured leg.

This, however, can cause many problems in the future up and down the chain of the body. What often happens is that the injured leg will come back stronger than the non-injured leg, which can lead to many imbalances and potential injuries in the future.

Even though in the beginning the non-injured leg will find the exercises and the ranges performed extremely easy and rudimentary, as the rehab process furthers, the injured leg will potentially gain strength, stability, and mobility that neither leg had before the rehab process, thus creating symmetry between the two legs that will aid in the reduction of further injuries.

Throughout the Post-Surgical Knee series, we discussed the process of bringing somebody who has had knee surgery and has gone through a basic rehab process until their gait has been restored to them having adequate levels of strength and proprioception to where they should feel more comfortable returning to sports practice without the risk of re-injury.

READ MORE: How to Get Through a Near Career-Ending Injury

Increasing ROM and the difficulty of exercises should be taken very slowly and should only be progressed when the client is very comfortable and confident within the range and exercise that they have been working through. Any acute knee injury, ranging from meniscus tears to patellar fractures to ACL tears, should have serious rehab and post-rehab phases focused on the rebuilding of strength, stability, and the eventual reduction of recurring injuries.

Noel FitzGibbon is a former international underage-level weightlifter who has represented Ireland at the European level and has achieved a World Ranking with the IWF. He has coached in strength and conditioning and weightlifting/powerlifting at a provincial, national and international level. He is currently working as a personal trainer and a strength and conditioning coach out of Calgary, Canada.

Part 1: The Range of Motion Rebuild