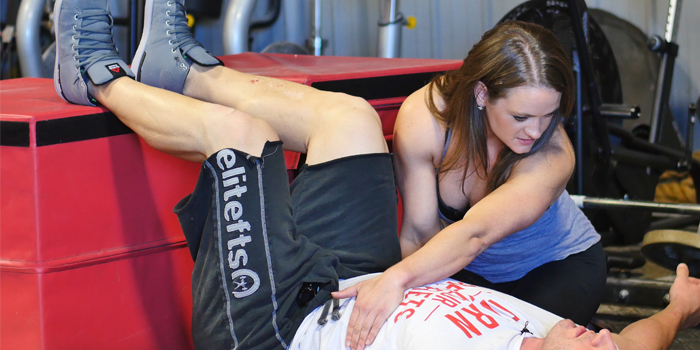 I’d be dishonest if I didn’t say that being a physical therapist with a substantial injury doesn’t call out a little shame. “Why aren’t you lifting yet? I know so-and-so also tore a tendon. He had surgery and he’s benching and squatting again already!”

Man, these words hurt any lifter, and thank goodness for my physical therapy background or they might make me want to do something stupid in my comeback. Having patience and trying not to compare have to be the hardest part about injury. Giving in to those things usually comes at the cost of ignoring the smart knowledge of what is happening to you¸ not that other person.

Everyone wants to know “just the one thing I can do” to get better. The answer is to learn how to think about injury. It’s not an easy one, but it’s a skill you’ll be so glad to be equipped with when necessity arises.

This is the last objective installment of the series I’ve been writing on groin injuries with the overarching theme of knowing what tissue is affected before you can put a plan together. My hope is that instead of looking for a quick recipe to treat your injury, you can learn how to think about it. I’ve written about the general anatomy of the hip as well as muscle tears, and why even though they may look gnarly at first, they will heal faster than almost any other type of injury, and why.

The last article written discussed tendon injuries, and how their structure requires a balance of healing time and appropriate, mechanical load progression. There have been previous articles written on different supporting structures, like the labrum and FAI.

It’s convenient when injuries fit into a nice clean box: one muscle or tendon is injured. Figuring out a plan of action is easier, and once a plan is in place, most people feel optimistic moving forward. Every now and then you get the injury that doesn’t fit a box: there are multiple structures involved, or the structures involved are important for multiple roles within certain movements.

I am going to be 100 percent transparent: When a doctor whom I trust and who knows how I train gave me his diagnosis, I had no idea what to do because I hadn’t met anyone that had this constellation of stuff. Neither had he. The best foundation we came up with was based on the same principles in the previous articles: What tissue is affected? How does it respond to movement and load? What does the healing process look like?

The complex groin injury I sustained was composed of the following:

The net effect of all of this stems from the knowledge of concepts mentioned earlier in this series: the healing/inflammation cycle, what certain tissue types need to heal (and how they’re all different), and the functional anatomy of the structures involved.

RELATED: If I Don't Have a Practitioner, Where Do I Go for Help?

The muscle and labral tears are minor issues relative to the tendon healing, which is limited by the bone fragment and location. The adductor longus is not only involved in moving the leg to and from our midlines or shifting our bodies to and from side to side and stabilizing our pelvises, but it also assists with flexion and extension (depending on its start position) and small degrees of rotation. It attaches to the front of the pelvis, which means any pelvis movement (which happens WAY more often than you’d think) is going to affect it. So, really, the tendon injury alone means it probably won’t ever get full “rest.” Not ideal, but workable. If the tendon had been the only major issue (meaning, it will be the slowest healing of the three), common logic says to follow the physiologic healing timeline for tendon, including letting it set down, then remodel through maybe the four-month mark, then mature for up to a whole year.

Both the remodeling and maturation phases for tendon include appropriate loading, meaning not too much, but also making sure it’s enough because tendons respond to a mechanical stimulus for the better when load is matched with tissue capacity. What the bone fragment complicated were the inflammation cycle and permitting the tendon to actually scar down, for lack of a better word: too much movement disrupted what healing had taken place and perpetuated the inflammatory cycle, preventing actual repair and remodeling to a degree that was functional for me.

Generally, a short duration of less movement with tendon injury can be followed by appropriate and progressive loading. I needed to let the bone fragment resolve before really working into the things we think about doing: mobility, strengthening, etc. I have a great deal of respect for the physician I worked with, and after my injury, he sent my MRI to another musculoskeletal radiologist to make sure they were seeing the same thing.

“Dani, if you go too hard right now and don’t let that scar down, bone fragment resolve, or keep irritating it, you’re done squatting heavy for good. You won’t have the stability or tissue resilience you need.”

That was all I needed to hear. I trained more than I needed to in the meantime, but my training was very specific, targeted, and with entirely different goals, based 100 percent on what we know about tendons (respond to load) and the fragment (needing to prevent disruption):

The most recent MRI I had was, quite frankly, perfect; I couldn’t have had better outcomes. By the time I had it done, I’d been SSB box squatting to just about parallel with no pain and heavy enough weight to feel like I’d been training but still had to be intentional about right leg use. At roughly eight months, I was working into conventional and sumo block pulls with roughly 65 percent of my conventional and sumo maxes. I started working in to frontal and transverse plane control in relatively stable positions, and as those muscles got stronger, mobility improved.

I still had major limitations that I expected to have because I hadn’t been given the green light to push those limits, but what I’d done in the meantime had gotten me to a point where both doctors that looked at my initial MRI couldn’t believe the lack of atrophy and overall tissue quality in the area.

A little over a year later, the tissue is healed, but requires an increase in both capacity and resiliency: The green light/good job healing really just gave me the go-ahead to start preparing the tissue. On top of that, small changes in training brought about larger changes in pattern: while my box squat felt good, taking the box away instantly made it harder for me to fully integrate my right leg. Deep right leg single leg pressing is about 70 percent as strong as the left. I’m still not comfortable pulling conventional from the floor, and my right glute still shakes and fatigues quickly. I’m getting a bit of right knee pain that I’ve never had because my right hip still has a hard time stabilizing.

I have to say, as much as I can’t wait to get back to heavy training, what has made this whole process more tolerable has been knowing what to expect and knowing how to think about it, which comes from my physical therapy background. I expect to have a little difficulty with it because my timeline had to deviate from the expected tendon injury timeline because there were other factors to consider.

Going forward, my best squat might be behind me, but I won’t say that with certainty. I can say for 100 percent certain that had I approached this like, “It’s just the tendon tear,” or compared to someone who had surgical repair, I doubt I’d have a shot at coming back as strong as I do now. Without thinking about the actual tissue involved in the injury and what’s happening locally in the area or just throwing the big-box label of adductor tear (remember: adductor muscle will heal differently than tendon) on it wouldn’t do justice to what the body needs. These principles are what make rehab and comebacks successful.

I have a pretty long road ahead of me, but the fact that the road doesn’t end in a ditch and I have someplace to move forward is a direct result of looking at the tissue involved, and seeing the bigger picture.

There’s usually a way to deconstruct a program or respect an injured tissue in a way that leaves people feeling like there is still something productive and hard they can do, or at least have ways to train around their injuries.

Learning how to think about injury is one of the most underrated skills any coach, athlete, or trainer can have, and ultimately, expectation management plays a huge role in long-term success and compliance.