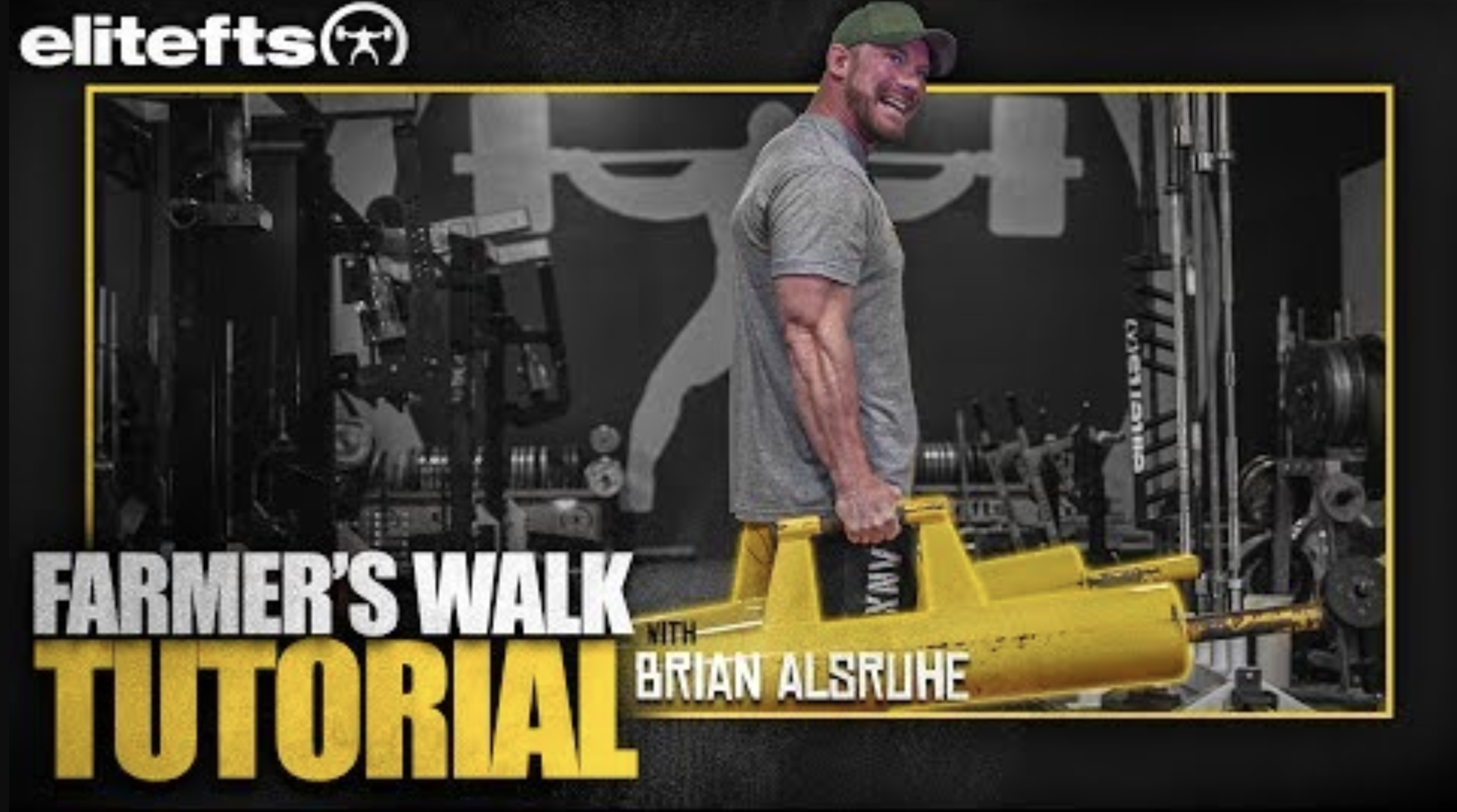 The farmer's walk is one of Brian Alsruhe’s favorite exercises of all time, and it’s one he thinks virtually every single person should do it, regardless of background. It works your grip, upper back, traps, biceps, core, and calves.

In the video, Brian’s using an elitefts farmer's walk implement, but if you don’t have one, that’s OK! Trap bars, rickshaws, and even heavy dumbbells can be utilized.

If you’re going to move with the implements, well, that changes things. Using a trick he picked up from Clint Darden on the elitefts YouTube channel, Brian takes his middle finger and drops it back a little bit, which will help drive the weight forward.

If you pick the implements up a little bit forward and they’re pointing upward, then you’ll have to fight against that weight. Don’t make this exercise any more challenging than it already is. Have it so those weights will drive you as you’re going. If you’re trying to pick up for a heavy weight at the start, Brian suggests picking dead up from the very beginning. Just pick it up and start walking.

However, if you’re trying to move faster (i.e., in a strongman competition), it may help to use weights that aren’t quite at maximal. In a competition, it comes down to who’s the fastest, not who can lift the most. In those cases, you’ll want to line up in the middle of the implement, offset your foot just a hair — not so that you’re in a lunge position — half a foot length will do. When you pick up the implements, you’re already going to be falling, which means you’re stepping and will be one second ahead of the competition.

Also, a tip for strongman competitors out there: Don’t wait for the judges to say go before you’re bracing and have your breath and everything else set.

The moment the judge says, “competitor, ready, go” you should be getting a breath in, bracing it down, pull the slack out of your body so that you’re almost hovering. When the judge says, “go,” you explode out of the blocks and take off for the run.

As you’re walking, Brian suggests thinking of your arms as meat hooks. Don’t bend your arms while you do a farmer's walk. It will throw your biceps into a dicey situation. As you get more tired and your grip gives out, you will begin to guard your body from coming around.

When you’re done with your farmer's walk, you’ll be surprised at all of the places where you’re feeling sore.