Why You Should Pull the SSB Handles In While Squatting 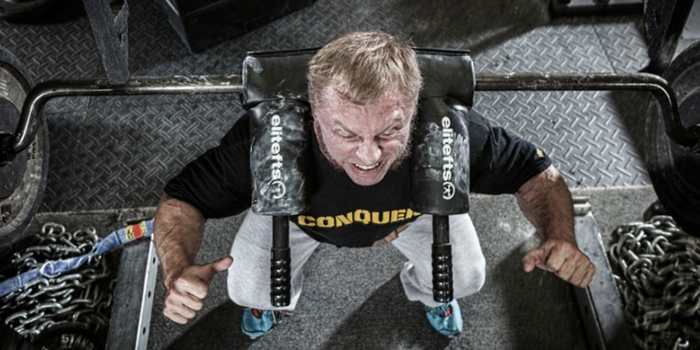 With the massive strides in sport science in the past decade paired with the bastardized marriage of the fitness community and social media, there has been a massive influx of information when it comes to strength training.

This information is being projected at a frequency so high that there is very little time to properly vet the sources, check for reliability, and interpret the data being jammed down your throat with whatever product that “evidence” is supporting.

RECENT: The Bulgarian Split Squat: Which Side Should You Load?

But lost in a never-ending sea of shake weights and jazzercise are some truly effective and innovative pieces of training equipment that have changed the landscape of strength training forever.

The Safety Squat Bar stands alone (in my opinion) as one of the single most effective ways to build a total.

Powerlifting in a single cue…

“Leg drive into your upper back.”

Think about it: Regardless of the lift, at some point, the intent of the lift will be to transfer force through your feet into your upper back. A cue that’s self-evident in the squat and deadlift, but even for bench pressing, where it is a little less obvious, this cue still holds true.

Keeping a strong base and initiating a horizontal leg drive through your hips into your spine and directly through the mid-scapular region will allow you to create somewhat of a downward counterforce (depending on your arch), which will aid you in pushing the bar away from your chest.

But back to the topic at hand.

Squatting with the Safety Squat Bar is often performed one of two ways; now, I don’t want to be binary and further the common social media narrative of green-check-or-red-X, indicating that there are a right way and a wrong way to perform this movement.

However, if the goal of this exercise is to help develop a strong leg drive into a strong upper back, then there will be a superior way to cue this movement based off the biomechanics of the muscles involved.

When a novice lifter uses the Safety Squat Bar, there is almost a reflexive intent onto the handles from the shoulder, as if their powerlifting brain has been hardwired with the thought, “If there is something in my hands, I must push it away from me.”

So you’ll see the lifter keep a very upright extended upper back position on the descent, the ascent, or both. They actively flex their shoulders into the hands, as if they’re attempting to push the handles of the Safety Squat Bar to the ceiling.

The Proper Form and Why

Instead of attempting to keep an upright chest position, by actively flexing the shoulders, the lifter should actually fight their initial instincts and pull the handles closer to them (watch the proper form in the video above). This 180-degree switch in the intent of the movement will make its orders of magnitude more effective in building strength in the upper back.

By pulling the handles closer to your chest, you will begin to put the thoracic spine into a flexed position.

“But wait! You shouldn’t round your back when you squat!”

Pay attention, because this following concept is what bridges the gap between novice lifters and great lifters.

It is true; a lifter should avoid spinal flexion, especially when loading in axial compression (bar on your back or a bar in your hands — i.e., squatting or deadlifting).

But the term “back” is a little ambiguous because it’s used synonymously with the spine. The spine has many different parts to it — four to be exact (cervical, thoracic, lumbar, sacrum). The purpose of pulling the handles toward you when squatting with the Safety Squat Bar is to intentionally and specifically put the THORACIC spine in flexion.

The thoracic spine is a very unique portion of the spine as one of its main distinguishing factors is its attachment to ribs. All 12 thoracic vertebrae are paired with an adjacent rib. These ribs will give structural stability to the spine, which is not replicated elsewhere in the body.

When we flex the thoracic spine, we are not putting the same kind of sheer force through the vertebrae as we would in the cervical or lumbar because the ribs will help circumferentially distribute that axial load in that flexed position.

Now, this flexed thoracic spine allows us to train a group of muscles that are otherwise very difficult to train. The erectors, as they are commonly referred to as, are key to developing upper back strength — but they come with them a very unique caveat: They are neurologically incapable of conscious control, which, simply put, means they can't be actively called upon. Rather, they can only be put in a position where they are forced to be active.

Most lifters misguided attempts at isolating the erectors to build strength usually involve some sort of back extension machine or bodyweight movement. But think for a second about the mechanical relationship between where these erector muscles attach and the type of leverage they are capable of producing.

The erector muscle group runs posterior to the spine, and because the spine is located posteriorly in our body, these muscles, when we’re in an upright standing position, have a very poor mechanical advantage to shorten and create further extension. However, when the spine begins to flex, which is the intent of cueing a squat with the Safety Squat Bar this particular way, these erector muscles that were relatively inactive in a neutral spine position all of a sudden become extremely active, but not in the role of extension, but rather, in the role of ant-flexion.

The Safety Squat Bar is a great tool to help build strength in the upper back, but if you’re looking to get the full effect out of this bar, you should consider applying this subtle cue of “pulling the bar into you” in order to load the erector muscles of the spine in their purest function as anti-flexors — not as extensors.