A Simple Guide to Getting Shredded in 6 Weeks 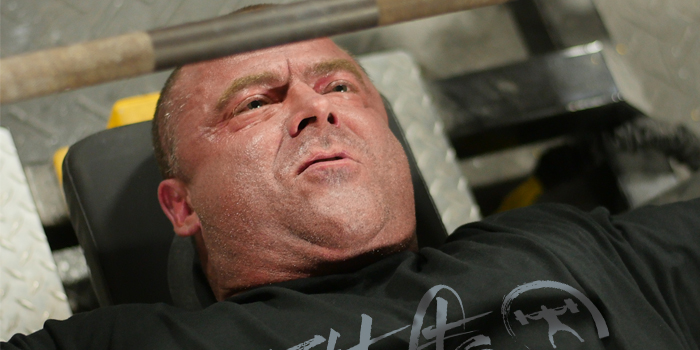 I’ll be the first to admit that I’m not a nutritionist or dietician. But I am definitely an information junkie when it comes to nutrition and the science behind how your body responds to changes in food. I will also admit that I am a simple dude. I like to keep my training and nutrition as simple and as effective as possible. I consider food nothing more than fuel.

In the past, I’ve tried numerous diets in an attempt to get muscular and lean and still have energy to strength train. One thing that I believe is important for anyone trying to achieve a degree of leanness is to have a goal that holds him or her accountable for their body composition change. There are always people trying to lose ten or twenty pounds to get ready for the trip south, a wedding or some other short term event that really doesn’t hold the same accountability as getting ready for a photo shoot, a bodybuilding or figure competition, or perhaps a firefighter calendar.

Two years ago, our department association was looking for volunteers to participate in a firefighter calendar shoot that would be sold to raise money and support a local children’s charity. Even though I was 48, I still considered this to be an opportunity to see if I had the metal to take on this challenge and come out looking a little better than Homer Simpson’s dad.

Like I said before, I am a very simple dude and after having had a taste of measuring macronutrient ratios and weighing food in the past, I vowed not to become a food nazi, robot or carry a small fridge on my back with an alarm that rings every two hours to signal it was time to feed the animal. I have been a big proponent of intermittent fasting and it works for me, very well. 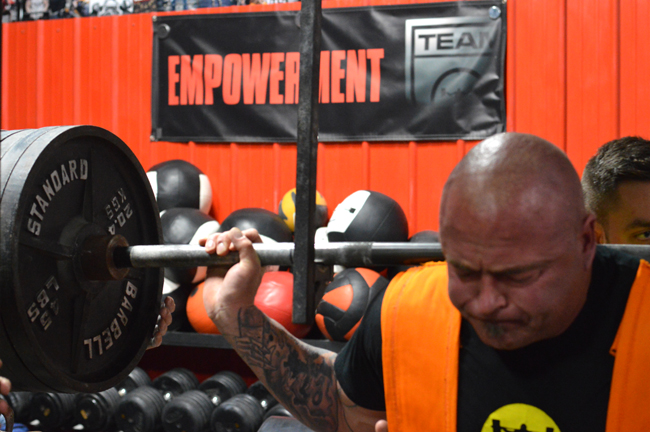 My guidelines that I follow are structured more around how the body's hormones function. In the morning, when cortisol levels are high and your body is in prime fat burning mode after fasting all night, I either skip breakfast all together or I will have a small protein/fat breakfast,. (i.e. whole eggs or shake with avocado/egg whites/natural nut butters or a sausage).

Most of the time I didn’t eat until at least noon. I kept my daily eating window from noon until 8:00 pm, which usually consisted of three to four meals with limiting carbohydrate intake until the last meal of the day to replenish glycogen stores. On non-training days I skipped the carbohydrates at night and only utilized them post-workout or on the evenings I trained.

Most dieting protocols for bodybuilding or figure competitors can consist of twelve, sixteen or twenty weeks of strict dieting. Remember: Simple Dude. I gave myself six weeks to get ready for this challenge.

My simple plan: I was going to continue following the basic template that I was using by intermittent fasting with three to four meals in an eight-hour feeding window. The difference I implemented was simple. I limited carbohydrate intake for all three or four nightly meals and planned a re-feed night every Sunday and Thursday night.

The first two weeks of the new protocol worked really well. Most of the protein I was eating was red meat so I had lots of energy with the extra fat intake. Four weeks out I changed my protein intake to primarily white meat (chicken, whitefish, tilapia, tuna). Almost immediately, I could feel the difference in energy due to changing my protein sources. I was more tired, but it definitely worked to help me get leaner. 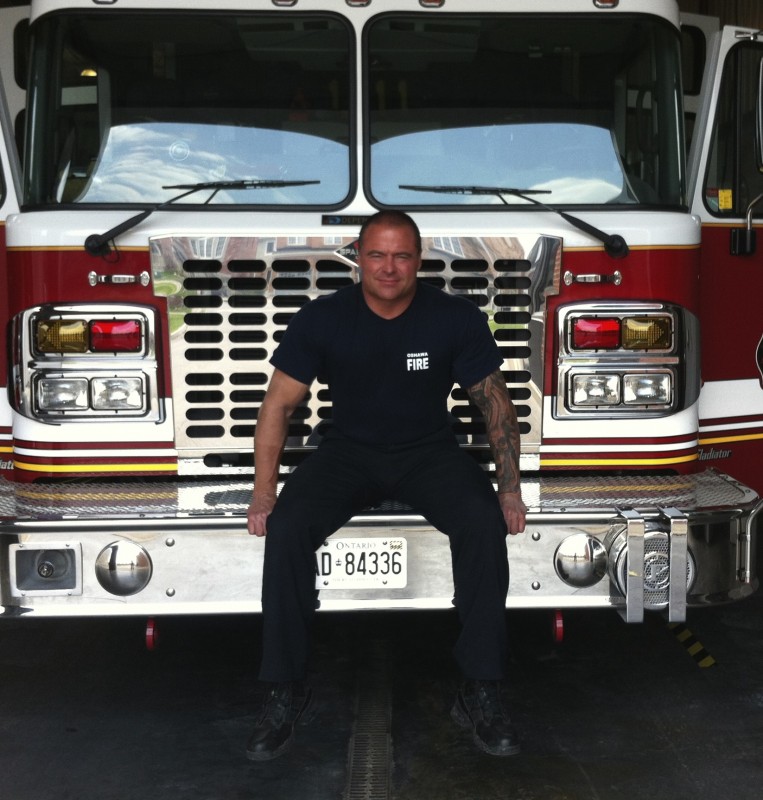 Four weeks out I also added the dreaded cardio component. Four times a week I alternated HIIT sprints on the treadmill for a least eight to ten rounds (20 seconds on/40 seconds off) with a five minute warm-up and five minute cool down. HIIT training was alternated with a steady-state cardio session lasting 40 minutes, usually a fast paced walk at an incline of twelve to fifteen degrees.

One thing that was apparent to me is that your body does NOT want to get rid of any weight. This is an evolutionary survival system that wants to store fat to keep you alive. Get rid of your fat reserves and your chances of survival in the natural wilderness are reduced.

This was very apparent because I was diligent about weighing myself every morning during this preparation. My weight would stay exactly the same for about three to four days and then one morning it would drop three or four pounds. This cycle repeated for the entire prep and I concluded my body was trying to hold on, and hold on as long as possible. My body was reluctant to drop weight until it was forced to finally give up and drop a few pounds.

The last week leading up to the photo shoot I did the dreaded water load, drinking over two gallons a day for four days to activate my aldosterone hormone which regulates levels of sodium and potassium, and blood pressure and volume. During water load, food intake consisted of mostly protein only as one gram of carbohydrates holds three grams of water and your goal is to get rid of water. Hormones always respond to a reverse feedback loop so when your body is taking in too much water, aldosterone tells your body to get rid of excess water which results in you going to pee about 50 times a day. Catheter, anyone?

Twenty-four hours prior to the photo-shoot I stopped drinking water altogether but the aldosterone still believes you’ll continue to have a high water intake so it continues to regulate homeostasis by getting rid of water. You trick your body into doing this…very cool. 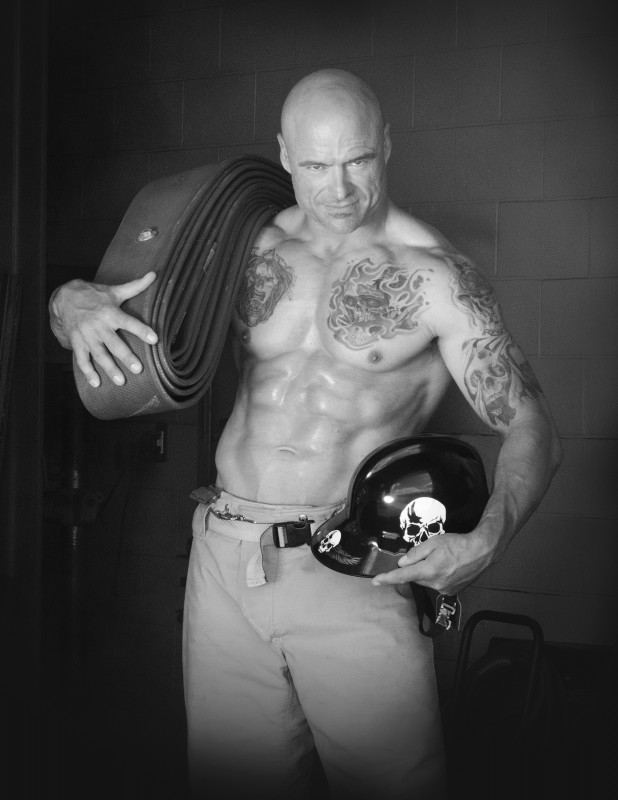 The night before the photo-shoot I started eating carbohydrates (if you remember carbs store water) so when you add carbohydrates the last day it draws any residual water from under your skin into your muscle that gives you a fuller, leaner, more pumped up look.

When I started the calendar prep I weighed almost 250 pounds. The morning of the photo shoot, I weighed 238 pounds.

I’m glad I had the opportunity to challenge myself to see if I had the mental toughness to go through with this experiment. I highly recommend you give it a try sometime. I kept my plan simple so I didn’t have to carry trays of Tupperware everywhere I went and I didn’t count macronutrients or weigh any food. It was a good experience but I’m glad I won’t be doing it again! If I can commit to a challenge like this at 48 years old, you can do it too!

I have developed a new appreciation for bodybuilders, figure athletes and anyone who does this on a regular basis as part of competition. The dedication and commitment needed to get into that type of body composition is nothing short of monumental. My hats off to you all.

For now, I like being a bloated-up powerlifter who still eats clean but doesn’t have to worry about trying to achieve single digit body fat. Besides, I’m so old that my next calendar would probably show me sitting in a wheelchair in pajamas covered with a wool blanket, hooked up to an IV, sitting beside the flower garden at the rest home for seniors.