WATCH: John Meadows and The Muscle Doc Train Back and Chest 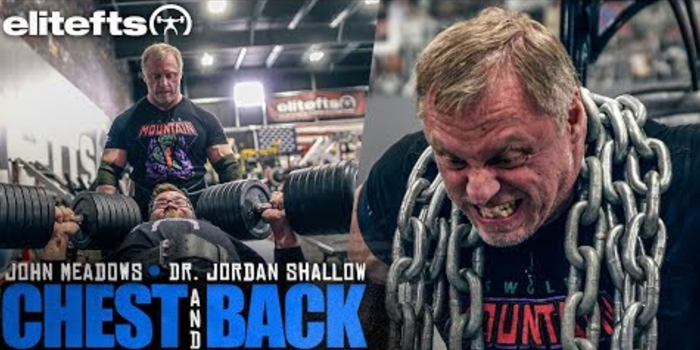 It’s chest and back day for John Meadows and Jordan “The Muscle Doc” Shallow at the elitefts S5 Compound.

John and Jordan have met before. John was particularly interested in some of the things Jordan talked about in his podcasts and Instagram posts, so he wanted to learn more and “steal” some of Jordan’s ideas.

That opportunity might have been wasted while Jordan ended up playing video games at John’s place the day before.

Don’t waste your opportunity to steal this workout from elitefts. Not that it’s stealing; you have our permission.

When it comes to warm-ups, John tends to do more sets than most people usually do — and it doesn’t help it’s cold outside, but thankfully, elitefts Digital Media Editor Josh Goedker has turned the heat on while filming.

John does three to four sets while working up to heavier weights, and then he goes all out.

As for Jordan, he starts his dumbbell press heavier than he normally would, but he has no problem getting through it, and unlike John, he’s able to get up from the bench easier.

John can probably pin it on not training for the past three or four days, which is a monumental event that hasn’t occurred in years. It helps that he hasn’t had a bodybuilding competition since May 2017 or so.

Notice that John tucks in his elbows with each movement. Doing so helps train his back. The angle is key, though some basic anatomy and physiology knowledge can go a long way, too. This can also change depending on a person’s size and build.

John coaches Jordan through bodyweight dips: keeping his feet and elbows out, dropping in, and going about three-fourths of the way through the movement instead of a full dip.

These cues are important since the target area is around the pecs; otherwise, John and Jordan would be working the delts and triceps. There’s nothing wrong with doing it the other way; it’s just a matter of what area you’re training.

It’s been quite some time since Jordan’s done dips — in fact, this is the first time he’s done it since he tore his pec at the Arnolds 18 months ago. He knows the strength is still there, but mentally... he’s not quite there yet. But he’ll get there.

John goes on to add chains to his dips. He notes that it’s ideal to put chains lower on your neck so they don’t push your head forward, but that’s harder to do as you add more chains.

3. Cable Flyes: work up to failure

Be sure not to turn these cable flyes into a press. Keep your arms locked in one position and pull across. It’s OK if there’s a slight bend in your arms as long as you make sure your pecs are doing all of the work and not pushing with your triceps.

Jordan has his sternum lifted, which prevents him from caving in his chest and putting all of the weight on his AC joint.

“This is something you don’t have to hesitate going to failure on. It’s safe, it’s not going to kill you, so go to failure on these sets.”

As a personal preference, John likes to do flyes when he’s really got a good pump going in his workout. It’s good for longevity, or at least he thinks it is. It’s a good stretch, and it should feel good.

Take this time to focus on stabilizing the muscle and not doing anything else.

For John, trap bar rows feel nice! This movement will help train the lats. You should feel a nice sense of tension in your back. Some, such as John, may think that tension feels better when using a trap bar with a pronated grip instead of a standard barbell with a pronate grip. To each their own.

Be sure to lower it under control while using your back. Make it a full rep, not a half-rep!

5. Lat Pulldowns with different attachments: 6 sets to failure (2 sets with each attachment)

One of the best things about the elitefts Lat Pulldown is how easy it is to change your grip with different attachments. Some attachments allow supinated grips, others pronated, and more neutral.

Variety is the spice of life, and that’s what John intends to have Jordan do when it comes to grips and attachments.

“We’ll do six sets on this today, but they’re all going to hit you a little bit differently.”

Some of the attachments they use include:

Sometimes, you’ve just got to save your strength for other things.

Rather than just go use the one in the S5 Compound, John decides to make a little bit of a workout out of gathering a few items for a homemade T-bar row. With some help from Dave Tate, he finds:

Together, Dave, John, and Jordan anchor the barbell with a part of a bar holder. They slip the spreader bar attachment on the free side of the barbell and a couple of plates follow.

Lo and behold, they have a homemade T-bar row! Hold the spreader attachment and pull it toward your chest. This exercise will hit your lower traps and rhomboids, but you can still (and should) flex your lats, too. You’ll feel this one all over. And if you ask John, it shouldn’t matter if it’s a lower or upper back day:

“Sometimes I think people try to specialize too much with back muscles. Like, ‘I’m just going to isolate my rhomboids.’ Well, good luck with that. All those muscles are supposed to work together... I think particularly in bodybuilding, we’re starting... you get a little carried away isolating some of these big muscles.”

This workout involved six exercises in total: three exercises for chest and three for back. All exercises go to failure, so be sure to focus on properly executing technique.

Having a training partner can really be beneficial to both parties involved and holding one another accountable.

“A really good training partner can always take you past what you think you can do, so you kind of know what you’re capable of. I think a lot of people just don’t, they think they’re going to failure, they’re close to it, but they’re really not.”